On behalf of the team at 5, I am pleased to forward our market letter for the fourth quarter of 2020. This issue revisits the 2020 election and discusses its potential impact on energy policy. Other topics covered include: (i) key energy provisions in the Stimulus Bill passed on December 29, 2020, (ii) green hydrogen, and (iii) the continued shift in generation from coal and nuclear to renewables. We conclude by noting the dramatic spike of LNG prices in Asia, a good reminder that, notwithstanding a long period of depressed pricing, electricity and natural gas remain volatile commodities that must be carefully managed.

In Issue 3, we included a chart that summarized the likely impact of several different potential election results. The list failed to include the actual result: President-elect Biden winning the White House, the Democrats controlling the House with a significantly lower majority (11 votes vs. 38 votes), and a Senate split 50/50. The chart below adds the actual result to our prior chart of possible outcomes.

While Democrats “control” the House and Senate, the slim Democratic majority in the House and a split Senate will hamper Biden’s ability to pass sweeping climate-related legislation. Biden has a few aggressive procedural options available to pass climate legislation (such as using the budget reconciliation process), but without broad support in Congress, we think the administration is more likely to focus on small wins. We do not expect anything resembling the “Green New Deal” or a move to pass a federal ban on fracking in 2021.

Ossoff and Warnock’s wins in Georgia boosted Biden’s ability to affect energy policy. Cabinet level appointments only require a majority vote of the Senate and cannot be held up by a filibuster. Biden can pick his cabinet without fear of a confirmation battle. And a look at his core climate team, shows that he has clearly taken advantage of this flexibility. 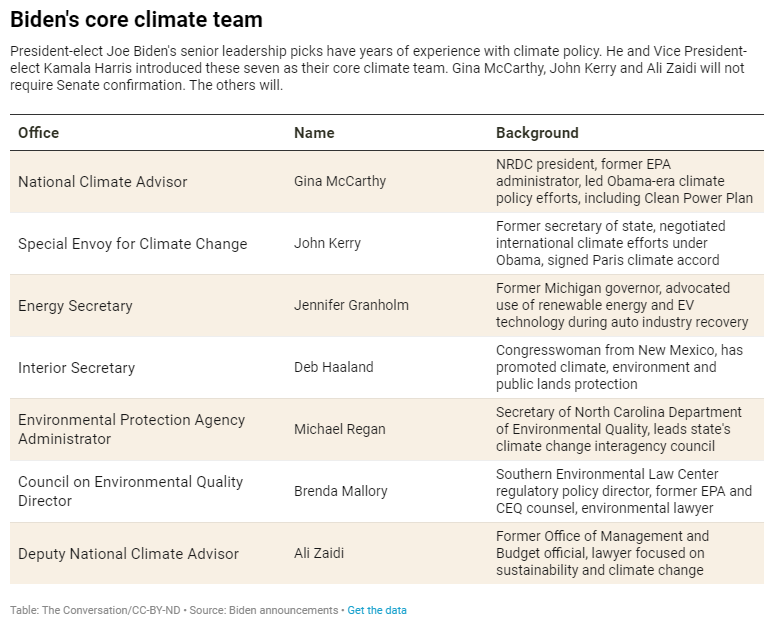 In addition to appointing strong climate advocates in key cabinet posts, we expect Biden to: (i) announce a plan to re-join the Paris Accord, and (ii) initiate steps to eliminate carbon generation by 2035 and reduce the carbon footprint of new and existing buildings 50% by 2035. Both of these commitments were part of his campaign platform. We expect a re-invigorated EPA to take various actions to increase environmental controls. Such controls may increase the cost of operating fossil fuel generation, but we do not see such policies impacting the energy market. As Bank of America recently noted in a market analysis, stricter environmental regulation is unlikely to accelerate the already rapid pace of coal plant retirements.

On election day, FERC only had 3 commissioners. This changed on November 30th when the Senate confirmed Mark Christie (a Republican) and Allison Clements (a Democrat) as commissioners. Following this vote, FERC now has a full set of commissioners, 3 of whom are Republican. The composition of FERC is set until Commissioner Chatterjee’s (Republican) term expires in June 2021. Once a Democratic commissioner is appointed to replace Chatterjee, the FERC will shift to 3 Democrats and 2 Republicans. In the meantime, Biden has the power to name a new Chairman. This is likely to be Allison Clements or Richard Glick. We will be watching closely to see how changes at the White House will impact FERC policy, particularly the MOPR ruling that, under a Trump controlled FERC, cut back on the ability of the states to subsidize renewable generation.

The Stimulus Bill: A Late Christmas Present for Renewable Generation

President Trump gave Biden’s climate plans a head start when he reluctantly signed the revised stimulus bill on December 29th. The bill contained several significant benefits for renewable energy developers. Federal solar tax credits were extended – under prior legislation, the tax credit declined from 26% to 22% for projects that failed to begin construction by December 31, 2020. The new bill provides that the 26% tax credit is available as long as construction begins by the end of 2022. It also extended tax benefits for residential solar projects.

Onshore and offshore wind projects received similar benefits. Tax credits for onshore wind projects set to expire for projects that did not begin construction by the end of 2020, now have another 12 months to commence construction and qualify for significant federal benefits. Offshore projects now have until the end of 2025 to commence construction and still qualify for a 30% investment tax credit – a period that takes into account the challenges of developing offshore wind generation. Central heat and power, small wind, microturbine and fuel cell projects also received additional tax benefits. The bill also provided new tax benefits to fuel cell motor vehicles, energy efficient commercial buildings, biofuels, and energy efficient homes – among others.

2020 saw green hydrogen gain significant traction as investors, regulators, and policy experts around the world began to seriously consider the technology’s future as the key to unlocking a 100% zero-emissions energy system. Green hydrogen, hydrogen produced by renewable energy, is often described as a “Swiss Army knife” as it can be used to fuel transit, power buildings, and store energy for long periods of time. In the United States, major green hydrogen projects are underway in California and the Northeast and natural gas companies are beginning to consider the technology as a way to eliminate greenhouse gas emissions from that sector. Around the world, green hydrogen investment has risen to staggering amounts as the European Union, Australia, and China, strive to become the center of the new green economy.

In 2021, this growth will continue as the world increasingly works to move past fossil fuels. The incoming Biden administration has pledged to throw its weight behind zero-emission generation, and any bet on green hydrogen is a bet on renewable energy.

Biden’s team will move quickly to introduce policies that incentivize carbon neutral generation. The stock market clearly expects to see an acceleration in renewable development, and renewable stocks have traded up significantly. The competitive market may play an even bigger role. As the graphs below demonstrate, the dramatic decline in the cost of wind and solar supports the shifting energy landscape. 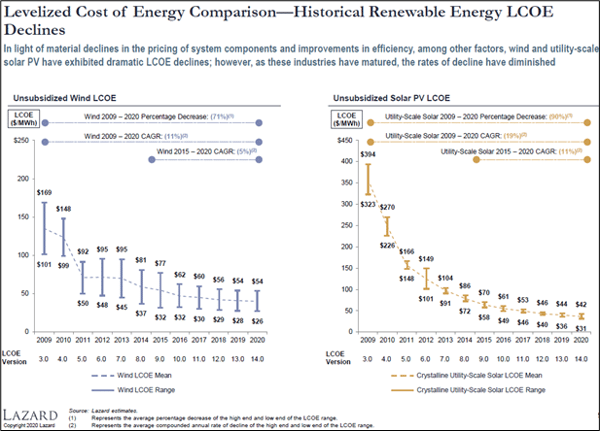 This reduction in cost translates directly into more renewable projects and fewer coal and nuclear generation units. EIA projects that 2021 will be a banner year for renewable installations and more coal and nuclear plant retirements. Overall, 9,100 MWs of generation is expected to be retired in 2021. 56% of these retirements will be nuclear plants and 31% coal fired. Key nuclear plants to be taken out of service include the Dresden and Byron plants in Illinois, and the last Indian Point reactor in New York. For our clients in New York, we continue to think there is some risk of price volatility after the last Indian Point unit is closed down. Large coal retirements will take place in various states including Maryland, Florida, Connecticut and Wisconsin. 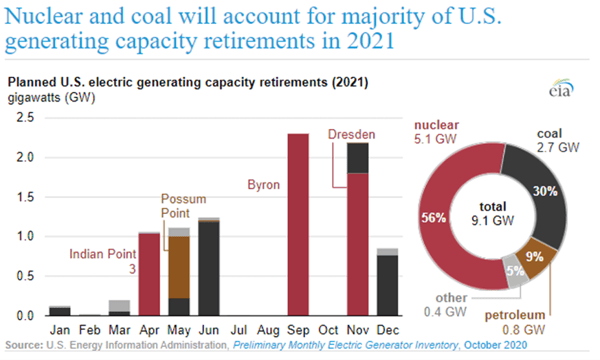 Wind and solar generation are replacing the coal and nuclear plants. EIA projects that almost 40 GWs of new renewable capacity will come online in 2021. Solar continues to lead the way, comprising some 39% of the new capacity, followed by wind at 31%. Texas still leads all other states, comprising 28% of the new capacity while Nevada, California, and North Carolina all see significant increases. Not surprisingly, EIA expects utility-scale storage to quadruple with 4.3 GWs of battery capacity to come online in 2021 – helping to address the intermittency associated with renewable generation.

The changing energy market and the growth of intermittent supply, from sources such as wind and solar, may drive increased volatility in the price of electricity and natural gas. We often see a direct correlation between market changes and price volatility. The recent spike in LNG prices in Asia reminds us of the risk inherent in the energy markets. In this case, unexpectedly cold weather together with a shortage in LNG ships caused a dramatic increase in LNG prices. As shown in the chart below, LNG is now 15x more expensive than it was when demand was hammered by the pandemic in the spring of 2020. The LNG price increase has spread to other markets as well, with electricity in Japan trading at record highs. 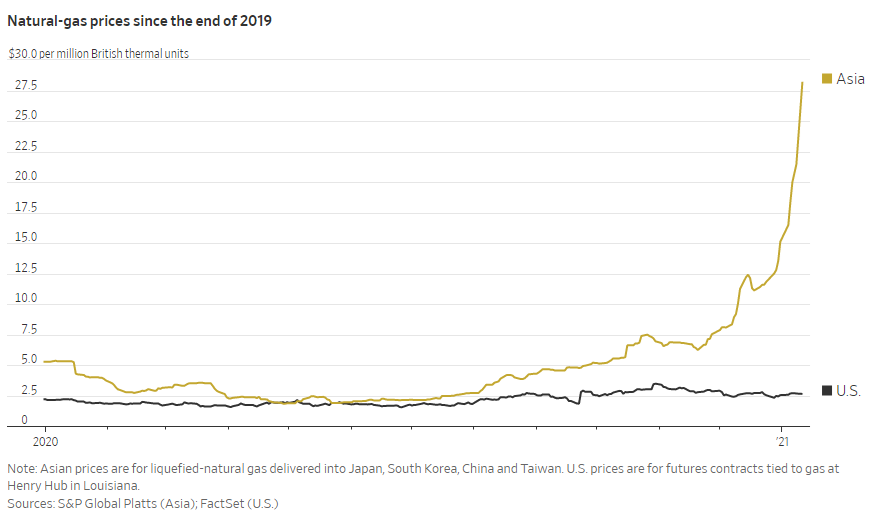 Figure 5: Natural-Gas Prices Since the End of 2019 from spglobal.com

In short, 2021 is going to be another exciting year in the energy market. As always, please do not hesitate to contact me or other members of the 5 team if you have energy related questions or you would like to discuss the issues covered in this letter in more detail.