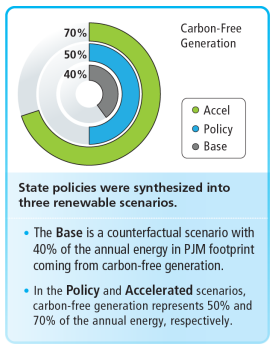 Resource adequacy risk in PJM has traditionally been contained in the summer months. However, with anticipated electrification, specifically electric heating, the study found that in an Accelerated scenario, winter demand growth more than doubled than in summer (see Figure 2). Not only does this cause a shift in seasonal demand profiles, but the study found a fundamental shift in the winter hourly demand profile that would shift demand higher and wider than in the summer. 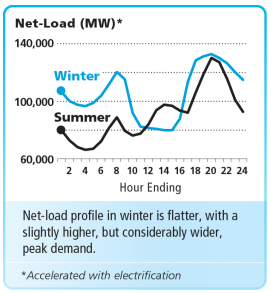 Given the shift to higher winter demand, PJM indicates that adequate thermal resources (e.g.; natural gas) would be needed to meet this demand until a different technology can provide the same level of capacity to avoid potential outages. PJM also recognized how the value of storage increases with electrification and load shifts.

In the Accelerated scenario, PJM found that 60% of the load-loss risk in the winter is concentrated in the last 4 hours of the day. Because of this, solar’s effective load carrying capability (ELCC), the measure of a resource’s reliability value, drops from 32% to 6%. While wind farms perform well in the winter, solar suffers and with a winter-peaking demand profile, solar becomes a less valuable resource. However, solar-hybrid resources, such as solar and storage increase the capacity value of the resource. The ELCC of various generating resources is shown in Figure 3.

Glen Thomas, president of the PJM Power Providers Group, a trade organization, stated that “increased electrification and the shift to a winter peaking system will fundamentally change what it means to be reliable in PJM. Decarbonization is important, but it must be done reliably, and reliability is going to be more challenging than it has been in the past.”[1]

With all eyes on PJM with the long-awaited 2023/2024 capacity auction set to be held on June 8, 2022, this multiyear, multiphase study seems to indicate that significant efforts are being made as we continue on this energy transition.