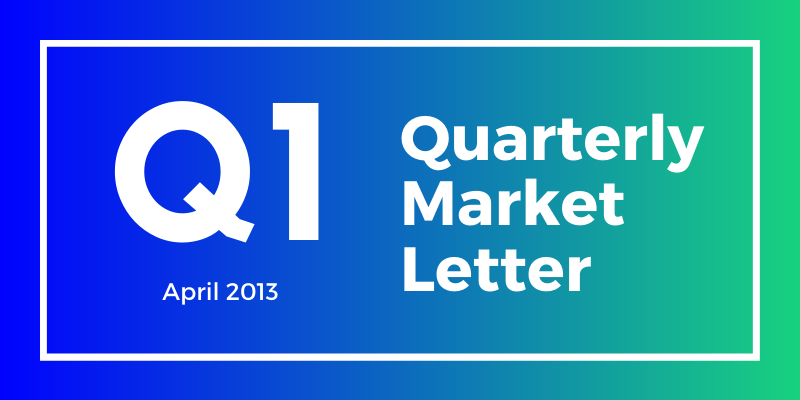 I am pleased to forward 5’s third quarterly overview of the energy market. As with prior letters, this note covers some notable trends and developments in the energy market over the past quarter.

Last quarter, we commented on how fracking and the resulting explosion in natural gas production, particularly in the Northeast, is turning the energy industry upside down. There is a second important trend occurring in the US energy market, again driven by improvements in fracking technology. In 2013, the US is on track to become a net oil exporter for the first time since 1995. The reason for this dramatic reversal in our nation’s dependence on foreign oil is the increase in domestic oil production from shale and other tight rock formations in North Dakota and Texas. Since September 2011, US oil production has increased by more than 900,000 barrels per day, driven (as with natural gas) by the use of horizontal drilling combined with hydraulic fracking. The new surplus of US oil production supports continued efforts to export both natural gas and oil to higher priced markets overseas. In the short term, only one thing is certain; as the market continues to adjust to a major restructuring of supply and demand, you should expect volatility in energy prices.

The most significant issue facing energy consumers this summer, particularly those in Texas, is the adequacy of electricity supply. A sense of urgency can be seen in the statements of state regulators, regional supply organizations, national organizations and industry participants. In March, the Electric Reliability Council of Texas (ERCOT) stated the “we will see very tight conditions on the hottest days” this summer and there is “a significant chance that ERCOT will need to issue Energy Emergency Alerts and appeal to consumers to reduce their energy use on some of those days.” These concerns are echoed by the North American Electric Reliability Corporation (NERC), the electric reliability organization certified by the Federal Energy Regulatory Commission (FERC) to establish and enforce reliability standards. NERC stated that “ERCOT… is of particular concern and projected to be below target capacity for the summer of 2013 forward.” In many cases, excess supply in one region can be used in others; unfortunately, the Texas electricity grid is independent and isolated from neighboring regions. Its limited ability to import electricity places Texas at a greater risk of shortage.

Over the medium term, PJM (the regional transmission organization for 13 states including Maryland, Pennsylvania, Delaware, New Jersey and the District of Columbia) also faces potential shortages. Regulators in Maryland and in New Jersey have tried to take steps to address the risk of shortages. Maryland went outside the competitive market and offered contracts that support the construction of 600 MWs of new gas fired generation. The state-supported contract is now embroiled in a complex litigation. The brief recently filed by the Maryland PSC makes their concerns clear, stating that:

The State of New Jersey, motivated by the same concerns as Maryland, issued contracts for 2,000 MWs of new gas fired generation. These contracts are also being delayed by protracted litigation. New Jersey’s rationale for new generation included:

Owners of generation echo these concerns. Calpine, one of the largest owners of generation, stated in a recent presentation that they are baffled by the current forward curve (the long term price at which electricity and natural gas is sold). The forward electricity curve is relatively flat. What this means is that you can purchase electricity or natural gas in future years at a price roughly equivalent to the price today. Calpine argues that a possible decision by ERCOT to increase the required amount of energy generation capacity (called operating reserves) will cause a dramatic increase in the price of electricity. While this is a biased view (Calpine owns generation in Texas), the argument has merit. The situation in PJM is similar. In PJM, the majority of new capacity has come in the shape of demand response resources. Demand response is created not by building new generation but by getting customers to agree to reduce usage or use onsite generation at peak times. Calpine argues that the use of relatively expensive demand response programs to replace steel in the ground (retiring coal plants) should drive up forward prices. NRG, another large owner of generation, expressed similar views on both ERCOT and PJM markets. If Calpine and NRG are right, we could see significant upward movements in electricity prices.

The markets’ inability to support the construction of new generation is not slowing the development of renewable resources. A dramatic reduction in the cost of distributed solar electricity creates opportunities for customers to install onsite generation at prices competitive to regulated rates. Solar price reductions are driven by a combination of factors including increased efficiency, lower production costs, and a significant supply/demand imbalance. This trend, together with continued strong Federal and State renewable incentives, creates an opportunity for customers that can utilize tax credits and accelerated depreciation to install on-site solar as a part of their total energy strategy. We are seeing increased interest in solar projects in all markets. For example, we are working with a customer in Maryland that will see net savings on their electricity bill of well over 4 cents per kWh by using on-site solar. The long term viability of renewable energy has the support of Wall Street as well. Warren Buffett, in his annual letter to shareholders, trumpets the fact that Mid-American, an energy company he controls, now has $13 billion in renewable investments (they had none just 9 years ago). Today, renewable energy projects are not necessarily about climate change, they can be a prudent and low cost way to manage energy costs.

Finally, I was pleased to read a profile on Adam Grant, the youngest tenured and highest rated professor at Penn’s Wharton School (NY Times, March 27, 2013). Grant is having a profound impact on workplace dynamics and speaks directly to the heart of what we are trying to create here at 5. His work has shown that “helping is not the enemy of productivity…it is the mother lode, the motivator that spurs increased productivity and creativity.” We formed 5 because we felt that this platform was simply the best way to help customers. We are glad that Professor Grant’s work provides some empirical support to our organizational philosophy and mission.

Our overall approach to managing risk has not changed. We feel strongly that most customers should pro-actively explore ways to hedge their exposure to rising electricity and natural gas prices.

Understanding the Score of Your Energy Data