The Fall of Near-Term Prices

Over the last year, forward electricity prices in ERCOT have continued to climb and set new highs every month. Figure 1 shows the price of wholesale electricity for calendar years 2023 through 2026 over the last 12 months. Notice that beginning in March, the rate of price increase has accelerated with the market setting new highs, followed by a slight correction and again testing new highs in the following month. Any trader will affirm that this is not sustainable in the long term and at some point, a downward move was inevitable. That move began in the middle of June. And as shown in Figure 1, prices have fallen over the next four calendar years. The most dramatic move can be seen in the 12-month strip for calendar year 2023. On June 14, calendar year 2023 was trading at $72.87/MWh. On June 27, 2022, that same calendar strip was trading at $52.39/MWh – a decrease of 28% over a two-week period. 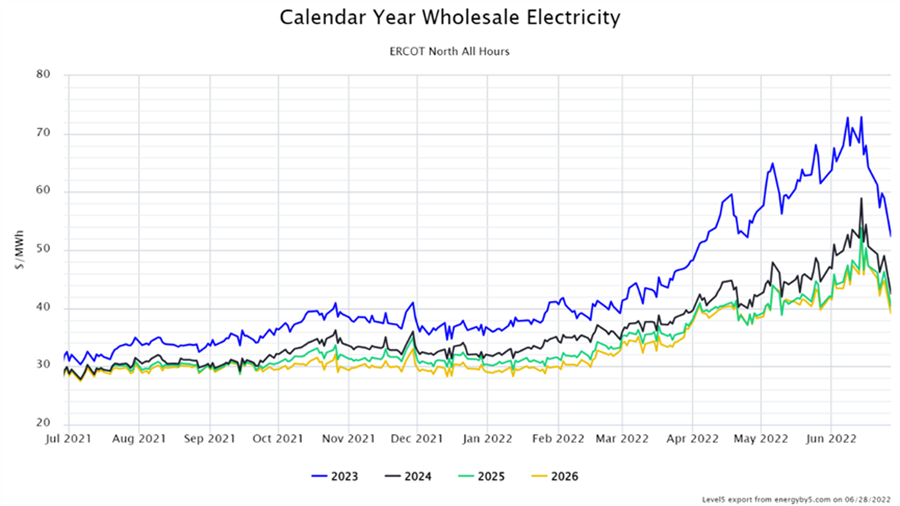 The explosion at the Freeport LNG export terminal on Quintana Island, TX earlier this month is likely behind this latest correction. As discussed in this month’s NYMEX article, on June 14, 2022, it was reported that the Freeport facility would be out of service longer than many suspected and potentially, through the end of the year. This one facility produces approximately 20% of the domestic LNG destined for overseas markets. The inability to process this gas means that the domestic natural gas supplies effectively increased by 2 Bcf/day while the Freeport plant is offline. Figure 2 shows that the NYMEX prompt month (July 2022) natural gas price was at its high in the first week of June and then fell dramatically in the wake of the news of the Freeport facility’s extended outage. 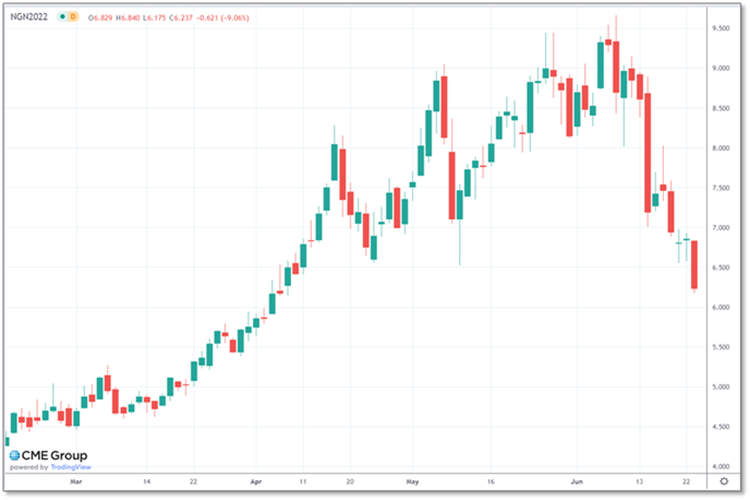 An interesting phenomenon also worth noting is the price separation between near-term and longer-term forward prices. One year ago, calendar years 2024 through 2026 were all trading at approximately $27/MWh, with calendar year 2023 trading at a $3 premium of $30/MWh. That premium for calendar year 2023 increased steadily and reached a maximum of $20/MWh in the first week of June. The silver lining in ERCOT power prices last month was the steep backwardation in the market where there was a significant discount in making longer-term purchases to pull down-weighted average prices. Today, while the degree of backwardation is not the same as it was a few weeks ago, there are still advantages in considering purchases that capture lower-priced years farther out on the curve. Today, electricity futures in ERCOT have returned to lower levels that have not been seen since earlier this year.

Even before the news of the Freeport LNG plant explosion, many analysts believed that electricity market fundamentals could not sustain the extended rally that has occurred in electricity prices. Of course, no one knows how long this correction will last, but it finally seems as though some steam has been taken out of the bullish run that has been in place for the last 18 months.