With the clock ticking on the current legislative session in Texas, lawmakers are anxious to get some legislation passed that addresses and corrects some of what occurred during Winter Storm Uri. In the weeks following the storm, there were several pieces of legislation that were gaining traction. Senate Bill 3 (SB3) gathered the most attention, which, in its original draft, sought a complete ban on real-time, index-based products, put limits on wholesale electricity prices, and addressed issues related to the winterization of generating assets. After several votes and amendments, SB3 passed the Senate and is now with the House, but it is unclear if it will be signed into law before the current legislative session ends on May 31. House Bill 16 (HB16), however, passed both the Senate and House this month and will likely be signed into law by Governor Abbott in the coming days.

HB16 addresses parts of SB3 and places a ban on index-based electricity products for small commercial and residential customers. These index-based electricity products present the most risk for buyers because they are completely exposed to volatile real-time electricity rates. These kinds of products can be beneficial in bear markets and when electricity supplies are plentiful. However, as Winter Storm Uri proved, the upside risk can be catastrophic. Figure 1 shows how real-time prices in North Texas have varied, by month, in years with the highest annual and monthly index prices: 2011, 2014, 2019 and 2021. As this chart shows, wholesale index prices from Uri were orders of magnitude higher than anything in the past. The average price for index-based electricity rates in 2020 was $22/MWh; during Winter Storm Uri, prices skyrocketed to the price cap of $9,000/MWh and remained there for several days. The legislation in HB16 would prohibit electricity suppliers from enrolling small commercial and residential clients into this kind of product structure to ensure they are not exposed to the same volatility in the future. 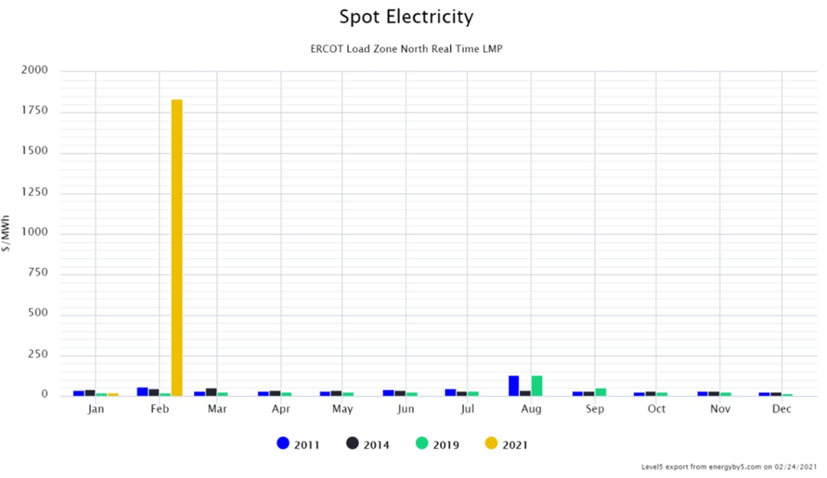 A ban on index-based electricity contracts for smaller electricity customers is a good thing. This new legislation will still allow larger commercial and industrial customers to sign index-based contracts provided that the client acknowledges the risks that are inherent in these structures.

Retail electricity providers (REPs) will be required to include language in their index electricity agreements that describes the volatility and price risk associated with wholesale energy prices. While not explicit in the legislation, this requirement also applies to holdover language in retail electricity contracts. Many electricity contracts contain language that allows a REP to move a customer to an indexed-based rate at the expiration of a fixed price contract if a new agreement is not signed. These index-based holdover rates will likely be replaced by month-to-month offers that are higher than the expiring fixed price contract rate. Additionally, HB16 should also apply to hybrid product structures where some percentage of a customer’s electricity volume is indexed to real-time prices. The acknowledgment and disclosure of wholesale energy price risk must be included in the executed electricity agreement or as a signed addendum to the contract.

While the intent of HB16 is certainly positive and is a successful legislative outcome, many other bills intended to address energy market reforms remain stuck in committee. These include Senate Bill 3 (SB3), which, in its current form would require the winterization of all generation, transmission, and natural gas pipelines. House Bills 14 (HB14) and 3648 (HB3648) contain legislation that would designate and protect critical facilities and infrastructure from rolling blackouts. HB14 remains in committee and HB3648 is awaiting debate in the Senate. It is unclear if Governor Abbott will extend the current legislative session to address these important issues and sign these bills into law.

Get to Know Ben Manna