PJM kept its cool last week as power markets in the midcontinent were struggling under the strain of record-setting energy demand due to a historic cold spell. Unlike what happened in Texas, grid reliability was maintained, and spot electricity prices remained under control. In PJM, the electricity futures market continues to trade sideways and largely rangebound between $26-30/MWh in the wholesale market across the entire region. Clearly, it will take more than wild weather to materially move this market.

This is good news for energy buyers with open short-term power positions. In fact, power for delivery in 2023 (black line) is cheaper than that for 2022 (blue line), as illustrated in Figure 1. This type of market phenomenon, where prices are less expensive into the future, is referred to as “backwardated”. Buyers with the ability to make a purchase a couple of years into the future should capitalize on this opportunity and speak to your Energy Advisor to assess your options.

PJM is the largest Regional Transmission Operator (RTO) in the country. The sheer size of this market, which moves electricity from Chicago to New Jersey, was one of the factors that worked in its favor and moderated electricity prices while prices were skyrocketing elsewhere. Winter Storm Uri devastated the ERCOT market, as millions were left in the dark and without heat and water for days. Other RTOs, such as MISO (the power market from Louisiana to Michigan) and SPP (just west of MISO and runs from Oklahoma up to the Dakotas), were not as fortunate as PJM as both suffered rotating power outages last week. Specifically, Entergy, a large utility that operates in MISO South (Louisiana, Arkansas and East Texas), was forced to rotate outages to 75,000 residential customers. With neighboring grids operating in emergency mode, PJM was able to export excess power to both SPP and MISO. Figure 2 shows the amount of electricity being imported by SPP over the course of last week’s critical demand for electricity. 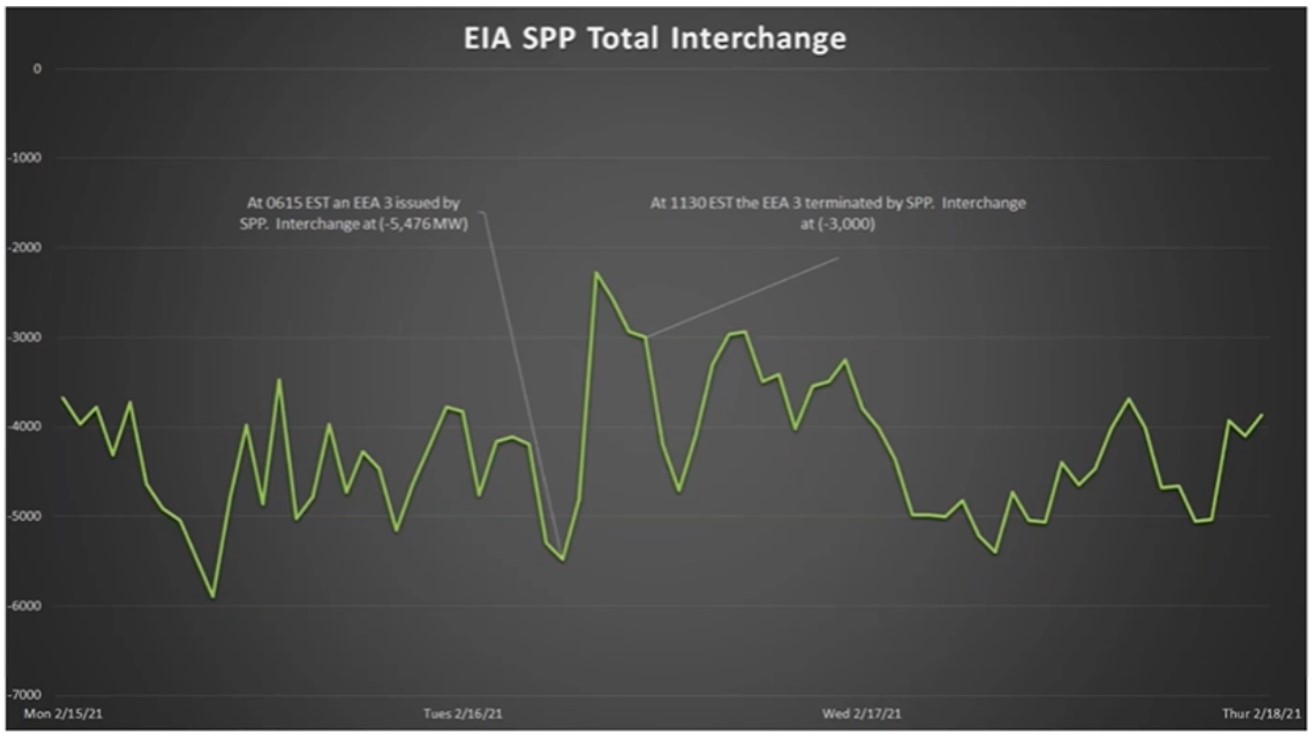 As it turned out, the PJM grid operators got a helping hand from Mother Nature. The recent cold weather event came due south out of Canada, and then retreated back where it came from rather than sweeping across the eastern half of the US. While temperatures in Chicago and in the Ohio Valley were frigid, the mercury in the eastern section of PJM, including Pennsylvania and Maryland, did not fall nearly as low as what was experienced in the midcontinent. Figure 3 shows the temperatures across the major PJM load centers last week, where dark blue indicates below-average temperatures. Note that last week, many states in eastern parts of PJM are in white or light blue, which indicates that temperatures were at, or near, normal for this time of year.

It was a different story in the western parts of PJM, where frigid temperatures produced extremely high spot prices on Friday, February 12th going into the President’s Day holiday weekend. The Chicago Citygate gas hub settled at $135/MMBtu over the long weekend, while prices at the Indiana gas hub settled at $75/MMBtu. Normally, spot natural gas prices for these gas hubs settle between $2-$3/MMBtu. Since spot natural gas prices have a big impact on spot electricity prices, there were significant price increases in both the day-ahead and real-time electricity markets in the ComEd service territory, which serves the greater Chicago area as shown in Figure 4.

PJM has been through power market crises before, which many industry observers and market participants alike are being reminded of as places like Texas thaw out. In 2003, PJM experienced a widespread blackout that cascaded from state-to-state and even affected Eastern Canada. And in 2014, PJM was hit with an extreme and sustained cold front that introduced us to the term “polar vortex”. Both events led to market reforms (like “capacity performance”) and to grid-hardening measures (like transmission upgrades) that have served to protect homes and businesses in the Mid-Atlantic region. Some of these lessons will likely be applied to other markets, such as ERCOT, as investigators work to identify corrective actions following last week’s events.