In ERCOT, energy users with “flexible loads” (i.e., folks that can dial back electricity usage on short notice) have a variety of demand response programs to choose from. These programs pay end users for their participation and performance and are designed to maintain reliability on the grid in times of stress. The causes for grid stress could include if either real-time energy demand is higher than what was forecast and/or because of delivery issues on the supply-side power resulting from forced outages at power plants, transmission lines, or both. Demand response is an energy management concept that has existed for over two decades and these programs are in use nationwide and around the world.

In Texas, demand response programs come in several flavors. These “emergency” demand response programs include programs administered by the Transmission and Distribution Service Providers (TDSPs) and programs administered by ERCOT, the grid operator. One of the most popular ERCOT programs is known as Emergency Response Service (ERS). The grid operator in Texas is making changes to the ERS program effective October 1, 2021, to better align the program goals with the dynamic realities of operating the grid. These changes are important for our demand response clients to understand and the team at 5 is here to help adjust curtailment plans to account for these changes.

The ERS program is a year-round demand response program, while the TDSP demand response programs are summer-only. In years past, the summer months carried the highest risk of grid reliability issues. This is the time of year when the “reserve margin” (i.e., the difference between supply capacity available to electricity demand) was typically the lowest due to surging power requirements from air conditioners and chillers that ramp up to combat the oppressive Texas heat. The summer months were also the time of year when wind power production (which has been a vital component of the ERCOT supply mix for many years now) was erratic and would sometimes drop off suddenly, underperforming the forecast, and starving the power grid of those sorely needed electrons.

Figure 1 below shows an example of this phenomenon from the summer of 2020. The green line (actual wind power production) fell sharply on August 14, underperforming the day-ahead forecast by nearly 2,000 MWs. For reference, one megawatt of electricity can usually power about 200 homes on a summer day. 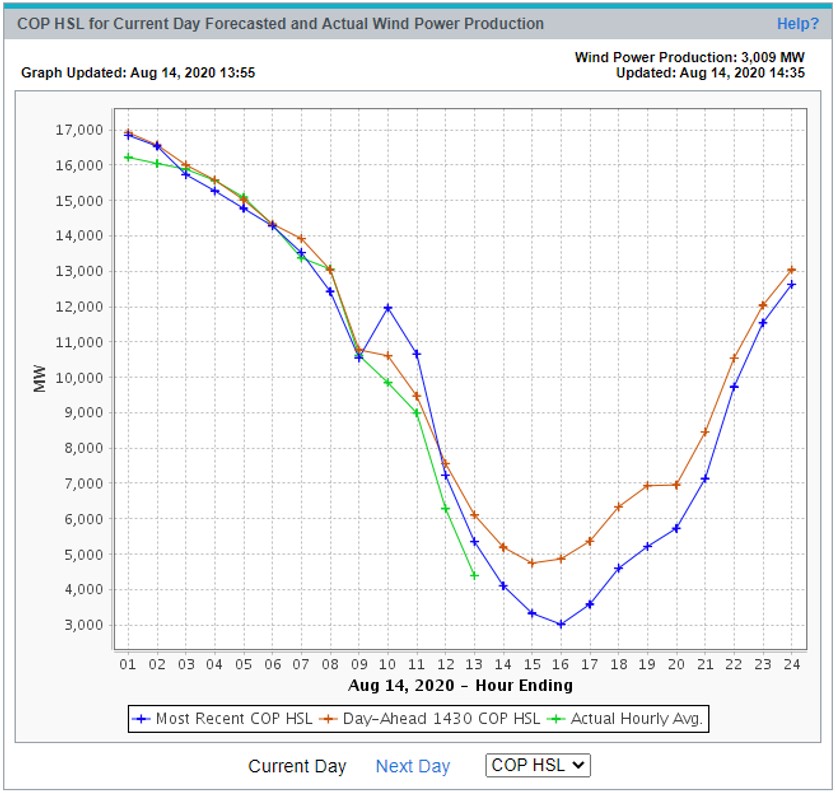 When situations like this occur on the power grid, additional power plant capacity must be brought online if available to maintain grid reliability. If the additional generation is not available, then demand response programs are called on to reduce the amount of demand on the grid.

This scenario is exactly what the ERS program was designed for when it first was introduced in 2007. However, as the state of the power grid in Texas continues to evolve, so too must the design of the ERS program.

The supply-side risks related to wind power in the summer months are less of a concern today because of the amount of solar power that has been built in Texas over the past few years. Figure 2 is a screenshot from ERCOT’s new dashboard which went live last month. This shows how well solar complements the typical summer wind pattern in Texas in terms of power production. The orange line (solar output) fills the gap when wind output (the blue line) falls right in the middle of a hot summer day in August. 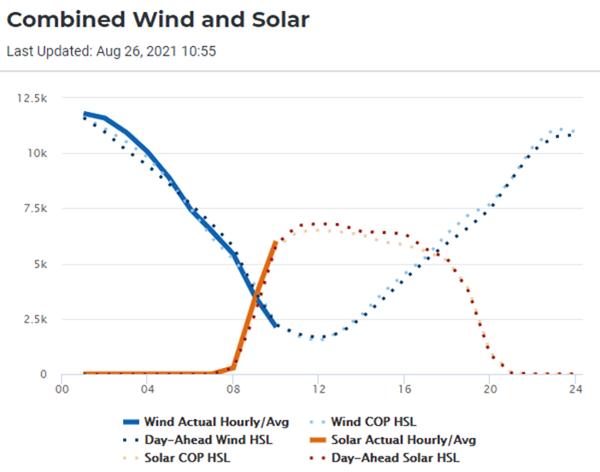 It will always be hot in the summertime in Texas and energy demand will be high. Yet, with so many new solar farms having been brought online in the past several years (and with more on the way), ERCOT is transitioning from a market designed to deal with supply deficit issues in summer to one with supply excess in summer.

The power grid issues that solar power solves in summer, however, cause reliability issues to crop up at other times of the year. Wintertime (when the sun is not likely to be shining) is increasingly becoming the riskiest time of year for the grid operators at ERCOT. This, of course, was made exceedingly clear to all during Winter Storm Uri in February 2021, when a record cold snap and soaring demand knocked a large percentage of the Texas power grid offline for the better part of a week, causing horrific loss of life and extensive economic damage.

We have already seen the electricity futures market in ERCOT take this new wintertime scarcity issue into account. Figure 3 shows that post-Uri, it is the “off-peak” hours (I.e., nights and weekends) that have registered the largest price increases. The blue line shows the forward curve for electricity delivered to Houston before the big freeze. The black line is the current forward curve. While prices have increased for all time periods throughout the curve, you can see the magnitude of the increase is greatest in the winter months. The market is indicating that the state will need more electricity in the winter months going forward and that the risk for tight reserve margins is now materially higher in the winter months than before. 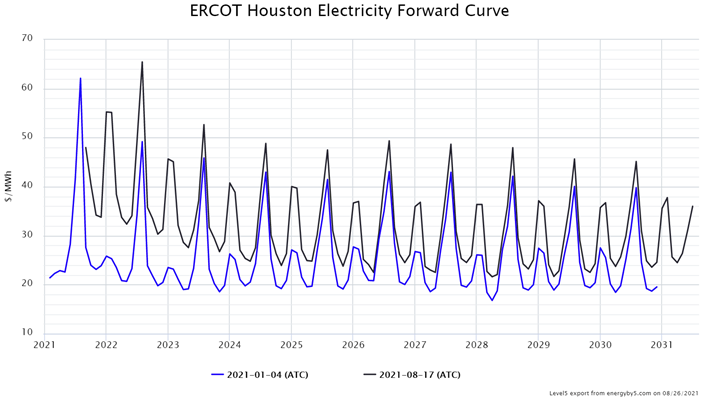 Amidst this backdrop, the time had come for ERCOT to adjust the ERS program design. If the likelihood of ERCOT deploying demand response in the winter is increasing, then ERCOT must find ways to attract participants into that period of the year.

These changes are important as specific prices are now assigned to each enrollment period and time period, as determined by an auction administered by ERCOT. ERS program participants, therefore, can opt out of certain periods if the prices for those periods are below the end user's opportunity cost. In other words, if the disruption to a facility caused by reducing electricity usage on short notice is not worth the demand response earnings in a certain period, then the program participant would not enroll in that period but could still enroll in other periods that pay more.

ERCOT allocates $50 million to the ERS program every year and it is not expected to increase that budget in the near term. Therefore, as demand response becomes more accessible to more people, thanks to the use of technology like smart thermostats, building automation systems, and remotely controlled backup generators, the prices paid to participants are discounted to keep the program within budget.

Time will tell how these changes to the ERS program impact clearing prices and participation levels. There are several ways a flexible load can earn energy market revenues in Texas. We may be approaching a level where the complexity involved in formulating an ERS bid strategy, when coupled with lower auction clear prices, encourages demand response participants to consider the other alternatives available to them in Texas.