What are Carbon Offset Credits? 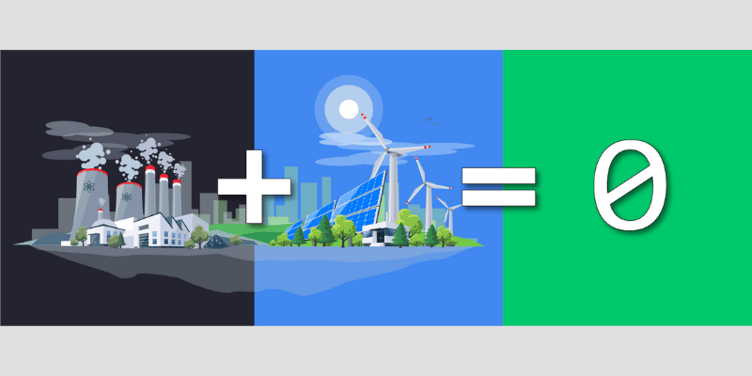 On October 31, the 26th United Nations Climate Change Conference (aka COP26) will kick off in Glasgow, Scotland. This event will mark what many energy and sustainability leaders consider to be an important escalation in the global fight to reduce pollution and implement measures to address the effects of climate change. There is one developing environmental commodity, carbon offset credits, that continues to gain traction and we are excited to help clients capitalize on this new sustainability opportunity.

Over the past few years, the carbon offset credit has risen to the forefront of many of our client conversations in all markets. At the US federal level, a strict technical definition of this intangible commodity does not exist, making the details of carbon offset credits somewhat subjective and open to interpretation. This is not unlike the status of the far more common environmental instrument known as the Renewable Energy Certificate (REC). Two decades ago, a REC was also hard to define but today it is a highly specific term with details on when and where the REC was generated, and its purpose (e.g., to comply with state law, or to make a sustainability claim). In fact, many market participants expect the maturation of the carbon offset credit to closely track that of the REC.

Think of carbon dioxide emissions as a bank account (made up of a series of debits and credits) where the basic principle supporting the market for carbon offset credits is a single ton of carbon dioxide (CO2) emitted into the atmosphere (the “debits” we put into the environment – our shared bank account). That same ton of carbon dioxide can also, at a later date, be sequestered or “credited” back into the ground by various means. Several companies are working on engineered solutions to extract air that is rich in CO2 (from oil and gas production fields, for example) and pump it back underground – a technology known as Direct Air Capture (“DAC”). DAC projects are, in fact, already underway in the Permian Basin in West Texas.[1] But, of course, natural processes exist to sequester carbon as well.

There are two types of carbon markets. First, there are “compliance” markets, which are often referred to as cap and trade programs. With these markets, governments establish a baseline amount of CO2 pollution from some point in the past and use this as the “Cap”. Entities that emit CO2 must then reduce their emissions to stay below that cap, or they risk penalties and (in some cases) legal action. Entities that cannot reasonably reduce emissions are allowed to purchase carbon offset credits from those that can. Credits can be traded until they are “retired” and taken out of the market. These types of carbon markets exist today in the State of California, the Province of Quebec, and the European Union, to name but a few.

The second type of carbon market is known as the “voluntary” market, and this is where the most recent commercial activity is occurring. Many buyers of carbon offset credits are corporations (including many based in the US) who are not subject to CO2 reduction laws but have voluntarily committed to reducing CO2 emissions in pursuit of their own strategic interests. Figure 1 below shows the growth of the voluntary carbon market since 2005, in terms of carbon offset credits issued and retired. 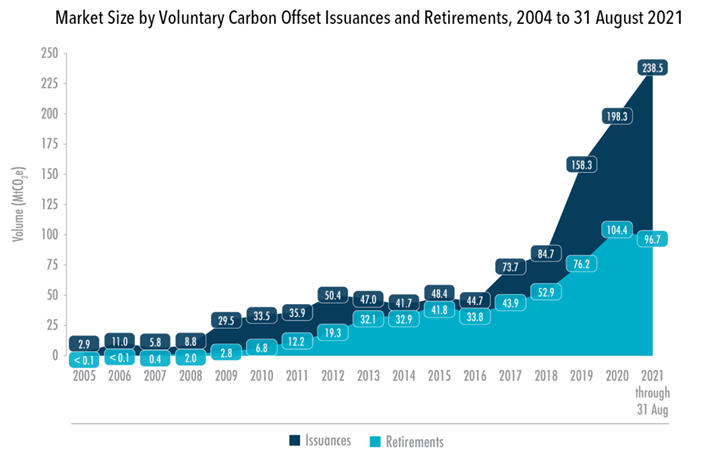 What exactly qualifies as a “carbon project” and where are these credits being generated?

There are two types of projects active in this space today: 1) projects that reduce existing carbon dioxide emissions, such as capturing methane from landfills, dairy farms or oil and gas wells and 2) projects that actually remove carbon dioxide from the atmosphere by capturing and storing CO2 in an underground geologic formation, like DAC or by restoring forests, grasslands, or watersheds that have been destroyed or damaged over time and serve as excellent carbon dioxide “sinks”. In fact, it’s believed that the global food system, from agricultural production to food storage and packaging, is responsible for up to one-third of all human-caused greenhouse-gas emissions[2]. Restoring large swathes of land and marshes and the soils underneath them is one of the best carbon dioxide management strategies available.

Once a carbon project is registered and verified (and there are several competing entities that do this including Verra, the American Carbon Registry, the Climate Action Reserve, the Gold Standard, and bCarbon to name a few), credits are generated and, like RECs, they are transferred into the accounts of the buyers of the credits.

As with any new market, and especially in markets for environmental commodities, there have been issues associated with the carbon markets. These markets have fallen victim to the same claims of “greenwashing” that have dogged RECs for decades. Unfortunately, bad actors exist on both sides of these transactions. Huge deals are being transacted by major corporations underpinned by suspect environmental claims[3].

What’s particularly difficult about carbon offset credits is the measurement and verification (M&V) process that’s necessary to validate the purported benefits of each carbon project. Carbon offset credits can be supplied and sourced from anywhere in the world. Gaining access to, for example, a rainforest in Brazil or Indonesia to conduct scientific studies to confirm levels of CO2 sequestration is not only difficult due to the remote nature of such projects, but it's also exceedingly expensive to validate projects in this way. Many market participants are looking to technology to reduce M&V costs, such as using satellite imagery. But, by using technology in this way, what you gain in cost savings you may well lose in credibility. Many buyers require regular physical site visits and/or ongoing access to landowners as conditions to their purchases of the carbon offset credits generated from certain projects. Remember that buyers in the “voluntary” market are doing so partially to make sustainability claims in their annual reports and marketing.

Rome wasn’t built in a day.

It’s taken hundreds of years and trillions of dollars to build and continually operate the global energy economy that exists today. It wasn’t that long ago that the benefits of “globalization” were en vogue in the US. We’ve built supply chains that span the globe and have developed just-in-time manufacturing processes that depend on the free and open flow of goods across our oceans and in our skies. Our cities have grown out instead of up, which has certainly enhanced our quality of life, but it’s also increased our demand for energy as we crisscross our cities and live our lives. Population growth since the Industrial Revolution is both an astonishing result of society’s success at efficiently fueling, feeding, and building things for itself as well as a staggering issue to consider. We are now witnessing the damage that’s been done to the planet and how hard nature can bite back in the forms of extreme weather events despite our best efforts and engineering prowess. It will take a long time to arrest the upward trend in carbon dioxide emissions, and even longer still to actually rebalance the carbon accounting ledger on this planet. The carbon markets are one attempt among many to martial some of the resources that will be required. The delegates at COP26 in Glasgow will be hard at work attempting to go even further.

Get to Know Kat Campayo