Last fall, 5 discussed the mechanism by which costs associated with the high-voltage transmission system are allocated across end-users in Texas. The current system enables the four Investor-Owned Utilities (IOUs) to update their tariffs twice a year, in March and in September, allowing the utilities to recoup their external costs for the state’s transmission system. Like last year, most customer classes across the four utilities should expect significant rate increases in September. The magnitude of these increases in each utility territory is shown in Figure 1. 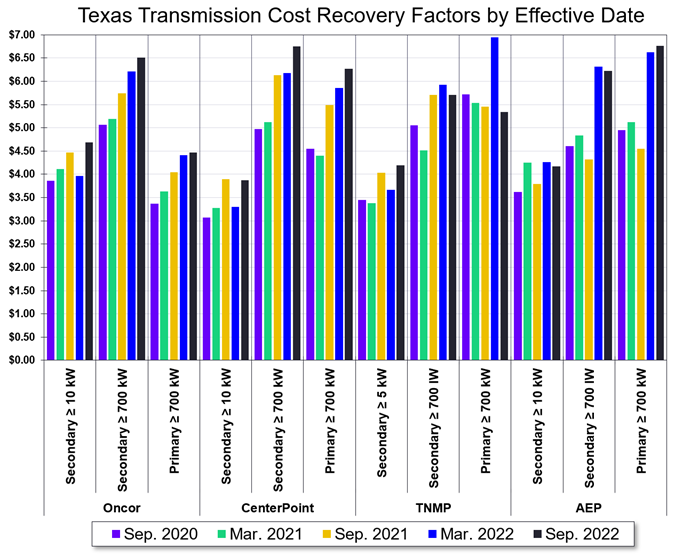 Secondary voltage customers in Figure 1 are all those who do not own the transformer outside their facility, and who take power at either 120/208 or 277/480 volts, while Primary voltage levels are typically above 4,000 volts.

These substantial increases in transmission costs are not likely to slow down over the next few years. ERCOT’s Independent Market Monitor, Potomac Economics, recently issued their monthly report and revealed that so far in 2022, congestion across the ERCOT grid has cost the market about $2.1 billion, or $8.30 per MWh of total ERCOT load. That compares to $2.1 billion for all of calendar year 2021 or about $5.35 per MWh. Under the grand design of the ERCOT wholesale market, those congestion costs manifest themselves in price differences between areas of surplus and inadequate generation. The theory is that new investors will see those price signals and invest in regions that need new generation.

The reality is that lately, new generation is not being built where demand is high or where congestion needs to be relieved. Instead, new wind and solar generating assets are being built where land is available and where the natural resources are most plentiful, which is mostly in sparsely populated regions of West and South Texas. This means that if Texas is going to fix its congestion problems, it will likely be at the expense of ratepayers in the form of new transmission infrastructure.

Adding to the growing need for transmission infrastructure spending is the rapidly growing demand for electricity across Texas. This year, total energy consumption is up over 12% from January to July over the same period last year, while peak monthly electricity demands for April through July are also up on average 10.8% year-over-year. Additionally, ERCOT broke its all-time record for electricity demand this year. The previous record of 74,897 MW was set in August 2019. That threshold was broken 11 times in June, 21 times in July, and 8 times in August, with a new peak demand record of 80,124 MW in the state. This 5,227 MW increase is more than all the nuclear reactors in Texas and more than the increase in solar power capacity over the last year.

Grid-scale batteries may offer some relief in the future. However, currently, there are only about 2,500 MWs of installed battery capacity throughout Texas and most of that capacity is used in reserve. Improvements in battery costs and charging cycles will need to be made before this technology has a material effect on grid congestion and prices. In the short term, as the state’s transmission project investment needs grow, on a consumer level, it is wise to plan for material increases in utility costs into the foreseeable future.