Twice per year, in March and then in September, the four major Transmission Distribution Utilities (TDUs) in Texas file with the Public Utility Commission of Texas (PUCT) to update their tariffs to account for the ever-changing costs of transmission. This semi-annual TDU cost true-up was typically not one of the larger charges that Retail Electric Providers (REPs) passed through to customers but lately that has changed. As the PUCT directs changes to the rate design, this tariff charge has increased substantially, ultimately impacting the monthly invoice for end users.

In Texas, the local TDUs own and maintain the lower voltage level power lines (secondary and primary voltage) in their respective service territories. TDUs, including Oncor, AEP, CenterPoint, or TNMP, do not always own the higher voltage transmission lines that carry 138,000 or 345,000 volts across the massive steel structures that crisscross the state. Often, high-voltage transmission lines are built and owned by independent Transmission Entities that develop these capital-intensive projects at the direction of the PUCT and ERCOT through an open-market bidding process.

New overhead high-voltage transmission projects can range from $500,000 for lower voltages lines, up to $2 million per mile for 345kV lines, and even more for high-voltage direct current or underground lines. To finance these expensive projects, owners and developers use long-term financing, whose costs are recouped through charges passed through to all the TDUs in the state. The charges are based on each TDU’s share of the overall demand on the four highest demand intervals in the months of June, July, August, and September. This is the same way that the TDUs charge their large commercial and industrial customers on those four Coincidental Peaks (“4CPs”) of the summer months. Since these uplift costs change often as new transmission projects come online, the PUCT allows the four TDUs to update their tariffs twice per year to account for the increased cost of new transmission projects.

Figure 1 shows the last three rate updates for each of the four TDUs. 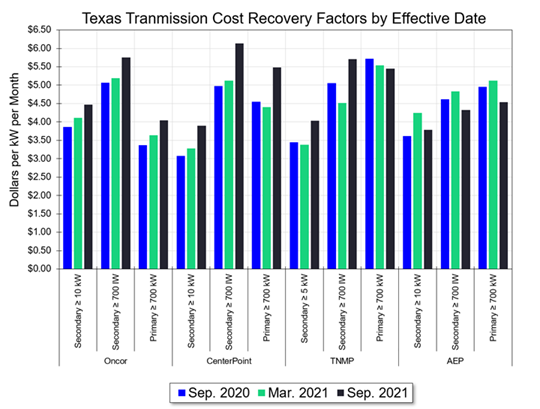 An example of these Transmission Cost Recovery Factor (TCRF) charges is shown in Figure 2, which is a detailed REP invoice from CenterPoint with the TDU charges broken out and the TCRF charge highlighted in yellow. This September, CenterPoint raised their TCRF rate for customers with demand greater than 700 kVA from $5.1263 to $6.1358 per kVA per month. You can see the TCRF is now the largest single line item on the invoice, accounting for almost 50% of the overall TDU charges for the month.

It is important to note that these costs can be managed and reduced by taking action to reduce electricity usage when 4CP email alerts are issued throughout the summer months. And while most of the tariff classes across various TDUs raised their TCRF rates in September, rates for AEP Texas customers actually decreased in this most recent adjustment. Given that TCRF costs for all other TDUs are increasing, it is likely that AEP will increase their TCRF rider once again during the next update in March 2022.

While there are many drivers behind in the increased transportation costs on the Texas grid, including an expanding economy, the multiple oil and gas plays in the state, the rapid increase of renewable generation assets, and the need to transport renewable energy from the rural areas to the large cities, the bottom line is that transmission costs will continue to increase for the foreseeable future.

LNG Exports: How much gas can we pass?