Valentine’s Day may warm our hearts, but it often coincides with some of the coldest weather of the winter, and this year was no exception. Last week, Valentine’s Day weekend was followed by Presidents Day, which means that gas traders must make their purchases for the long weekend on Friday to cover the next four days. The weather forecast on that Friday pointed to record cold temperatures across most of the midcontinent and extending into south Texas. The expectation of cold temperatures and high heating demand over the long holiday weekend started to produce volatility in natural gas markets as early as Friday afternoon.

On the afternoon of Friday, February 12, the major gas trading hubs in the midcontinent were trading at record high prices for the next four days:

Prices in the western part of the country averaged about $80/MMBtu, while regions to the east were largely unaffected, with Henry Hub in Louisiana at $6/MMBtu and prices in the Northeast (TETCO M3 & Transco Z6) all generally at or below $6/MMBtu. Clearly the price spikes were limited to and contained in the middle of the country.

When trading resumed on Tuesday for Wednesday delivery, the situation went from bad to worse. With natural gas scarcity already widespread from Louisiana throughout Texas and up past Kansas, spot prices climbed even higher. By Tuesday afternoon, prices had climbed to levels at or above the following:

And while these record-breaking price rallies were limited to Texas and the middle of the country, Henry Hub spot prices hit an 18-year high of $17/MMBtu on Tuesday, then $23.61 on Wednesday. At the same time, Northeast regional hub averages climbed to a modest $12/MMBtu, with Transco setting a regional high of around $18/MMBtu along the eastern seaboard. The magnitude of the spot price increase at the Henry Hub in Louisiana is shown in Figure 1. 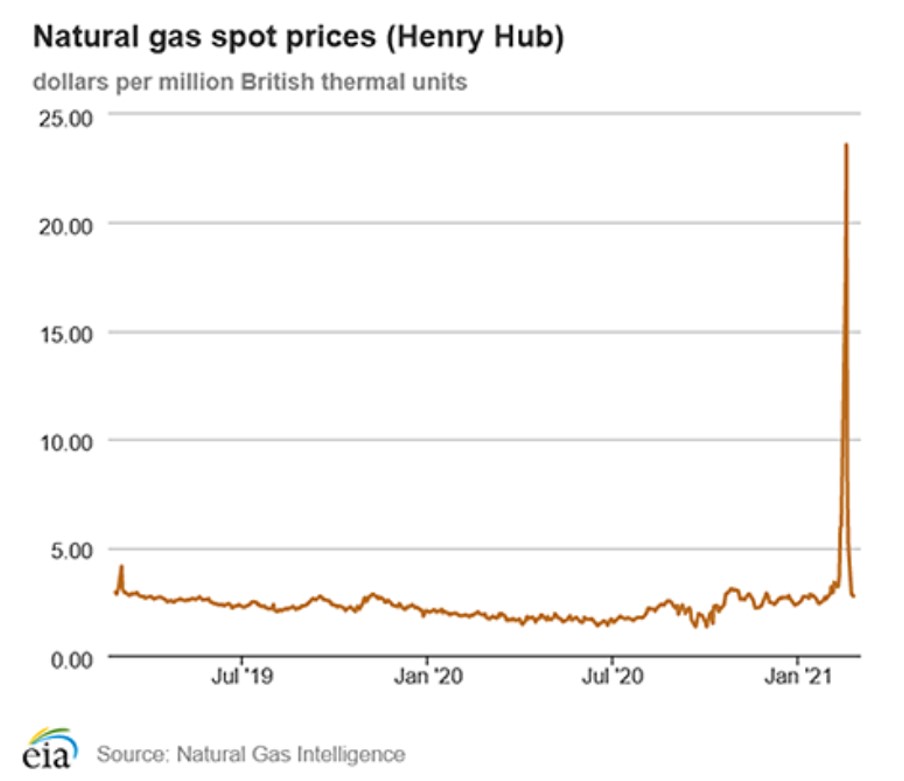 This extraordinary volatility and regional demand for natural gas was primarily driven by increased demand for fuel for heating as near-record low temperatures settled in over the middle of the county. This was aggravated by large multiple supply reductions and disruptions, mostly from frozen pipes and power outages at gas processing plants and compressor stations. While actions taken by regional grid operators helped to stabilize the power grids through rolling blackouts, they also dramatically reduced natural gas supplies.

After the record high demand for natural gas, and the dramatic decreases in production due to freeze-ins and pipeline equipment failures, the EIA reported a withdrawal of 338 Bcf from storage on Thursday morning this week. This is the second largest natural gas withdrawal ever recorded, behind only the first January withdrawal in 2018 of 359 Bcf.

Given the record high spot prices, demand, and storage withdrawals, many expected a corresponding rally in futures prices. This kind of response in the market would make sense – except it never happened. In the middle of the blackouts across Texas, the March natural gas contract traded intra-day as high as $3.30/MMBtu. A week later, the March contract settled at $2.854/MMBtu, and retraced all the way back to where prices were trading on February 10th. This is likely due to warmer-than-normal weather patterns that have taken over the short-term forecasts.

It has been said that the secret to happiness is having a short memory and leaving the past behind. If that is true, then there are a lot of happy natural gas traders out there who have their eyes fixed on thoughts of spring, warmer temperatures, and the beginning of baseball season.