Inexpensive spot prices for natural gas in the Midwest and Mid-Atlantic Regions have had a material impact on the spot prices for electricity inPJM. Figure 1 illustrates the monthly average Real-Time index prices for the two main trading hubs in PJM (PJM West is a broad area from Erie to DC, PJM East is the Philadelphia area and East) going back to 2016. This shows a decreasing trend in spot prices going back to last fall, following the decline in natural gas prices. It also highlights that in the last two months, spot electricity prices have settled near their lows, close to those that were set back in 2016. 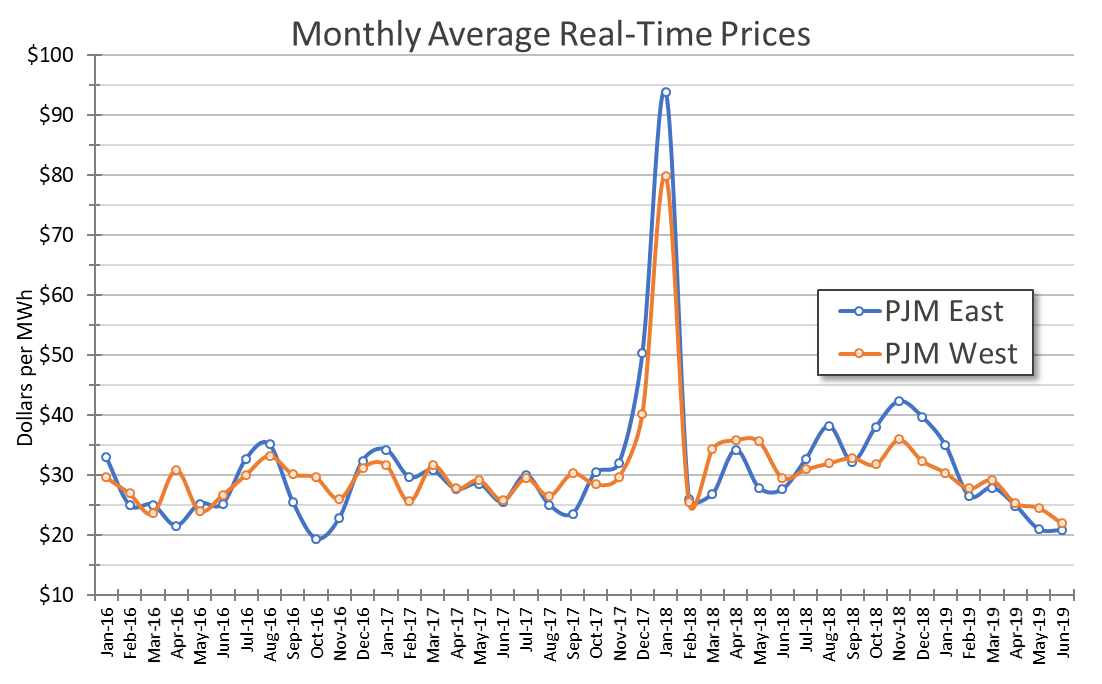 Declining spot prices have had an impact on forward market prices too. Figure 2 shows the trading history for January 2020 to December 2022 in PJM East going back to January 2016. The decline in spot prices over the last couple of months has been a significant factor in the dramatic drop in forward prices over the last couple of months. The red arrow in Figure 2 shows that forward prices for January 2020 to December 2022 are at their lowest levels since the fall of 2017. These are excellent purchasing signals for clients in PJM that have open positions beyond January 2020.

Maryland:  Senate Bill 516 was approved and became a law in late May and will take effect on October 1, 2019. This new law will dramatically increase the amount of renewable energy that is required by suppliers to purchase on the behalf of customers in Maryland. The previous standard required 25% of the state’s electricity to come from renewable sources by 2020. The new law builds upon this and mandates that 50% of the state’s electricity must come from renewable sources by 2030. This new law also increases the amount of electricity that has to come from solar power, escalating from 6% in 2020 up to 14.5% by 2030. This act alone has dramatically increased the market price of Maryland’s Solar Renewable Energy Credits (SRECs). These new renewable power obligations will raise electricity prices in the near-term for all clients in Maryland.

Clients who execute retail supply agreements before the law takes effect in October may avoid the higher electricity rates that will occur as a result of the new renewable power standards. We strongly encourage all clients in Maryland to contact their energy advisors to discuss ways to mitigate their exposure to higher electricity rates from this new legislation.

Pennsylvania: Senate Bill 510, which would approve Zero Emission Credit (ZEC) subsidies for the state’s nuclear power plants has stalled. This reduces the likelyhood that Pennsylvania will move forward with ZEC subsidies during this session.  As the legislation stalled, Exelon announced their intention to move forward with the early retirement of the Three Mile Island nuclear station.

Ohio:  House Bill 6 passed and now awaits action in the Senate.  This bill is similar to ZEC subsidies in other states as it seeks additional funds that would be recouped through electricity customers to keep FirstEnergy’s Perry and Davis-Besse nuclear plants in operation.  FirstEnergy claims that it needs the Senate to act this summer because both plants will need to be refueled if they are to remain in operation.  If the ZEC subsidies are not approved, FirstEnergy claims that Davis-Besse will close in May 2020 and Perry will close in 2021. This bill is different from ZEC legislation in Maryland and Pennsylvania as it removes many of the renewable energy standards in Ohio and replaces them with subsidies to not only keep the state’s nuclear plants in operation but to also financially support two coal-fired plants in the Ohio Valley Electric Cooperative.  Proponents of House Bill 6 claim that this is a jobs and clean energy bill, since it will support the continued operation of Davis-Besse and Perry nuclear stations and that it will also support electricity that is being generated in Ohio.