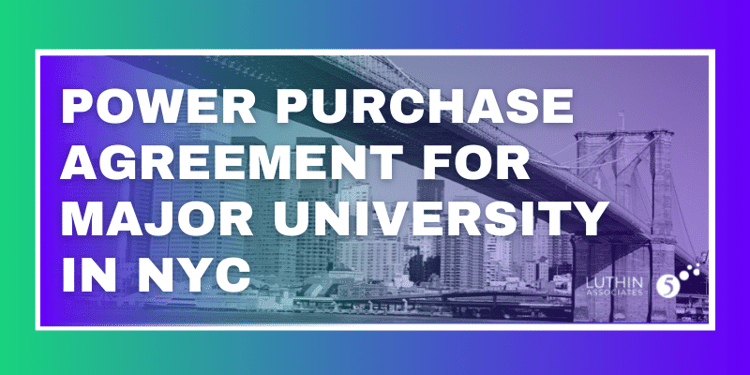 Luthin Associates was involved in negotiating a Power Purchasing Agreement (PPA) that helped a well-established New York City University build the largest solar system installed in New York City. The 3.1-megawatt solar collection will offset a significant share of the electricity used by this university and its sister school located in the Bronx. This project is in support of Governor Andrew M. Cuomo’s clean energy goal authorizing 50% of electricity to come from renewable energy sources by 2030.

The solar installation contains more than 9,000 solar panels and will produce almost four million kilowatt-hours of clean solar energy annually. This is enough to counterbalance 20% of the University’s electricity use and 37% of the sister school’s use. The projected cumulative savings for this project is more than $2.3 million over 20 years, which is an average of approximately $115,000 annually.

The solar project utilizes an arrangement referred to as remote net metering, in which installed solar at one site can offset electric bills for customers at other locations. The cost associated with solar energy continues to decline. As such, the state is dedicated to ensuring that the policies and regulations that compensate solar production benefit all electric customers while also benefiting the electric grid and delivering the biggest return on investment in regards to reducing carbon emissions.

Luthin Associates assisted in negotiating the key terms of the PPA which included, but was not limited to:

Applying for available incentives was a key factor in financing this project. Aside from negotiating the PAA, Luthin Associates provided the university with information on existing incentives, such as NY-Sun, to help with funding. NY-Sun is an initiative devoted to making solar energy more accessible and affordable throughout New York State. Apart from researching incentive opportunities, Luthin provided the University with the requirements and qualifications needed to participate in the NY-Sun program, which ultimately provided funding for this project. The NY-Sun initiative is a major component of Governor Andrew M. Cuomo’s Reforming the Energy Vision (REV) which aims to create a cleaner, more resilient, and affordable energy system for all New Yorkers. By increasing the number of renewable energy sources statewide, through private and public partnerships, New York has been successfully reducing the state’s carbon footprint.

The solar system was designed, developed, and installed by New York City-based EnterSolar. Key Equipment Finance, an affiliate of KeyCorp and one of the largest bank-based equipment finance providers in the country, offered to finance the project, which was also supported by Consolidated Edison, Inc.

The projected cumulative cost avoidance for this project is more than $2.3 million.