New York City’s electricity is primarily generated by fossil fuel-fired power plants which typically produce higher levels of greenhouse gases than generators in the rest of the state. Physical bottlenecks in the City’s electrical transmission infrastructure have limited its ability to receive additional power from zero-emission generators located in other parts of the state or neighboring regions. The lack of downstate renewable generating assets and physical constraints have created a challenge for the state in reaching its carbon reduction targets established in the Climate Leadership and Community Protection Act (CLCPA).

Additionally, the current generation mix adversely affects NYC’s electricity carbon coefficient as promogulated in Local Law 97 of the Climate Mobilization Act (CMA). The financial penalties facing building owners will be significant if the electricity generation mix does not improve through decarbonization in the coming years as the carbon limits for buildings ratchets down in 2030 and 2035.

The selected developers CHPE and CPNY proposed hydropower delivery from Quebec and solar and wind power from upstate New York. The proposed transmission lines are expected to provide 18 million MWhs of renewable energy to NYC each year, which would reduce greenhouse gas emissions by 77 million metric tons over the next 15 years, according to NYERSDA. These renewable generating assets from upstate and the CHPE transmission line are shown in Figure 1. 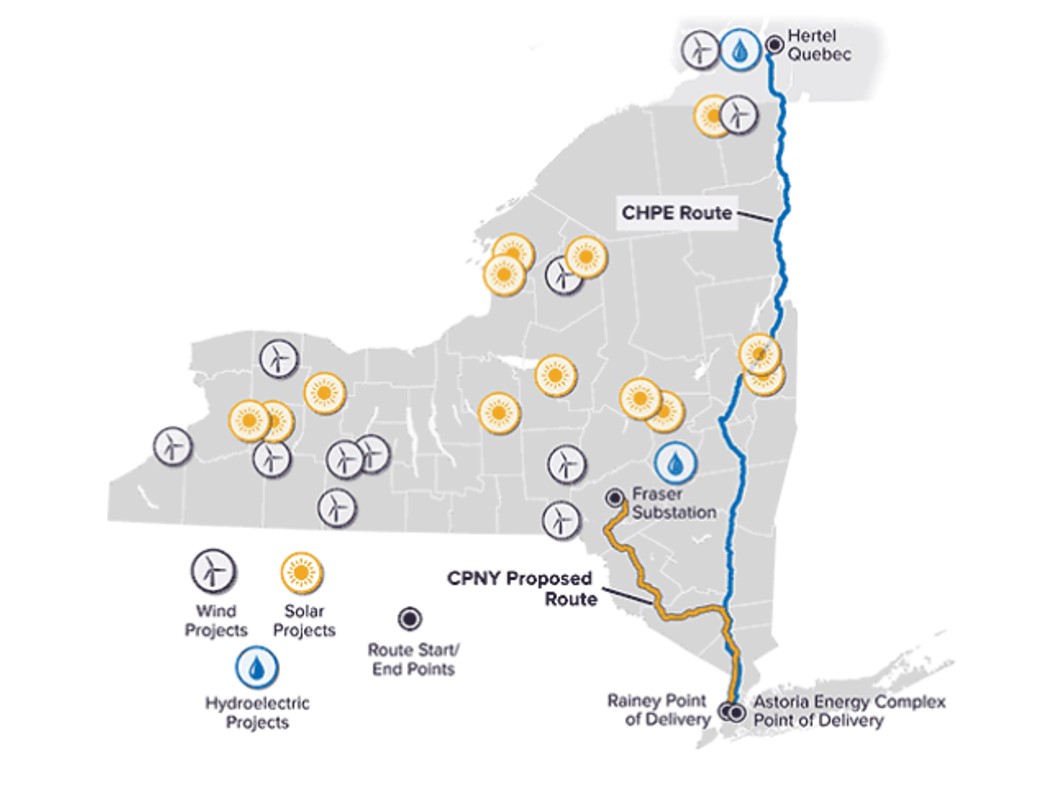 5 is Keeping Close Watch of These Developments

In October, representatives from CPNY and CHPE spoke on a panel, hosted by Urban Green, to discuss the proposed projects. 5’s summary from the panel presentations appears in Table 1 below. 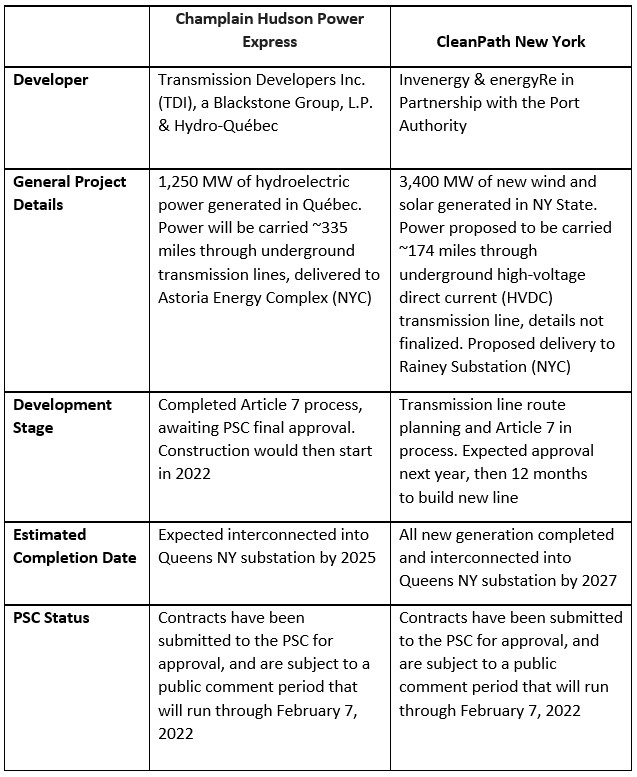 5 Will Continue Tracking the Following for Our Clients:

5 will continue to track many components of these projects starting with the actual costs and how those will be allocated to the rate base. Official cost estimates have not been announced but early estimates put the projects in the billions.

The marketplace is waiting for NYSERDA to formalize the programmatic structure of Tier 4 commercial sales since these newly established RECs will be owned by NYSERDA. So far, we have heard that a portion of anticipated annual RECs will be offered to voluntary purchasers first, likely through an auction process. If demand exceeds supply on the first offer, the RECs will be allocated on pro-rata share of the purchase quantity requested and any unsold RECs could be assigned to retail electricity suppliers as part of the Clean Energy Standards (CES) obligation. The price for RECs from solicited projects will likely be Index-based and vary based on the difference between the required strike price for the transmission line and market price for energy and capacity.

Another area to watch is how much these transmission lines will help alleviate LL97 carbon penalty liabilities for building owners who currently face steep penalties in 2030 and 2035 based on the carbon coefficient from electricity sourced from the grid. The city will need to update the carbon coefficient for electricity expeditiously so building owners can continue to plan for necessary energy retrofits, including electrification, in the next decade.

CHPE and CPNY will be the largest transmission projects contracted in New York State in the last 50 years and the success of these projects is of high importance for the state and city to reach the carbon reduction targets of the CLCPA and CMA. 5 continues to assess the information as it is made available and then incorporate the new details into our recommendations for energy purchasing as all buyers are expected to be affected, either directly or indirectly, by these projects.