One Hot Week in Texas

Over the past two months in Texas we’ve witnessed our dream summer: a July where there was plenty of rain across the state, where North Texas didn’t see an official 100 degree day until July 31st, and where both Real Time electricity index prices were tame, and forward summer prices fell. Then August came.  The streak of sub-100 degree days ended, a high-pressure weather system settled in and we were all reminded of what summer in Texas is really all about.

In Texas, as multiple hot days start to stack up, heat starts to build in the urban areas, and each subsequent 100 to 102 degree day brings a slightly higher peak demand to the electrical system.  On Monday (August 12th) and Tuesday (August 13th), that steady build in higher daily temperatures and higher peak demand finally built up to the point where the total ERCOT system load started to run close to total system capacity.

On Monday, ERCOT’s peak hourly demands surpassed the prior record for demand set during July 2018, for all hours from 3:00 pm through 7:00 pm.  The impact this peak demand had on Real Time prices was dramatic.  The highest priced hour (the hour from 2pm to 3 pm) cleared the auction process above $4,100 per MWh, which is about six times higher than the previous month’s highest priced hour of about $700 per MWh, but still far short of the system ceiling of about $9,000 per MWh.

On Tuesday, the weather forecast was similar to Monday, with the one big difference: lower wind forecasts.  Lower wind speeds translated to about 2,000 MWs less output from wind farms across those critical afternoon hours.  The amount of wind generation compared to all other generating assets on Tuesday is show in Figure 1.  This reduction in total wind generation, combined with total systemwide load similar to Monday afternoon was enough to send Real Time Index prices up to and slightly over the systemwide cap of $9,000 per MWh for six, 15-minute intervals between 3:15 and 4:45 PM (See Figure 2).  This is the first time in ERCOT’s history that the $9,000 price cap has been hit for an entire 15-minute interval, much less for multiple intervals in a row.  Tuesday’s average Real Time index price in North Texas averaged $1,024 per MWh, or $1.02 per kWh. 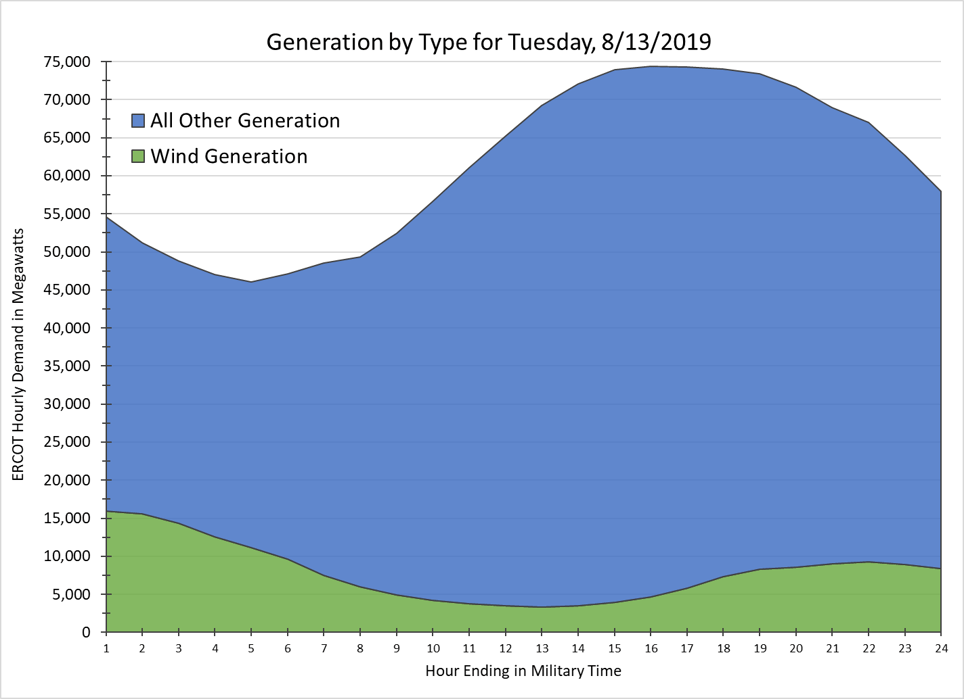 Wednesday was a bit of a reprieve from the heat, with rain showers moving through North Texas in the morning, and showers moving south towards Central Texas and the Houston area in the afternoon.  Later that evening, prices started to become volatile.  Prices between the hours of 5:00 to 6:00 PM averaged about $1,300 per MWh, even though prices during the day averaged $115 per MWh, which was 10% of what prices were on Tuesday.

The price volatility that began Wednesday evening continued into Thursday afternoon.  Thursday was slightly cooler than the day before, which reduced the demand on the electricity grid.  However, an 840 MW natural gas fired plant in East Texas tripped offline early Thursday morning and wind speeds were down, which reduced the output from wind farms.  That reduction in electricity production was just enough to put the grid back into a critical situation by 2 PM.  On Thursday afternoon, prices rose above $8,500 per MWh for two hours and set another record where the average daily index price was $1,168 per MWh - just slightly higher than Tuesday’s.

There may be additional price volatility today (August 16th).  Even though the East Texas power plant that was offline on Thursday came back into service this morning, the lack of wind in the wind forecast along with slightly higher temperatures have this afternoon’s forecast predicting another situation where there is not enough generating capacity to meet the amount of demand. 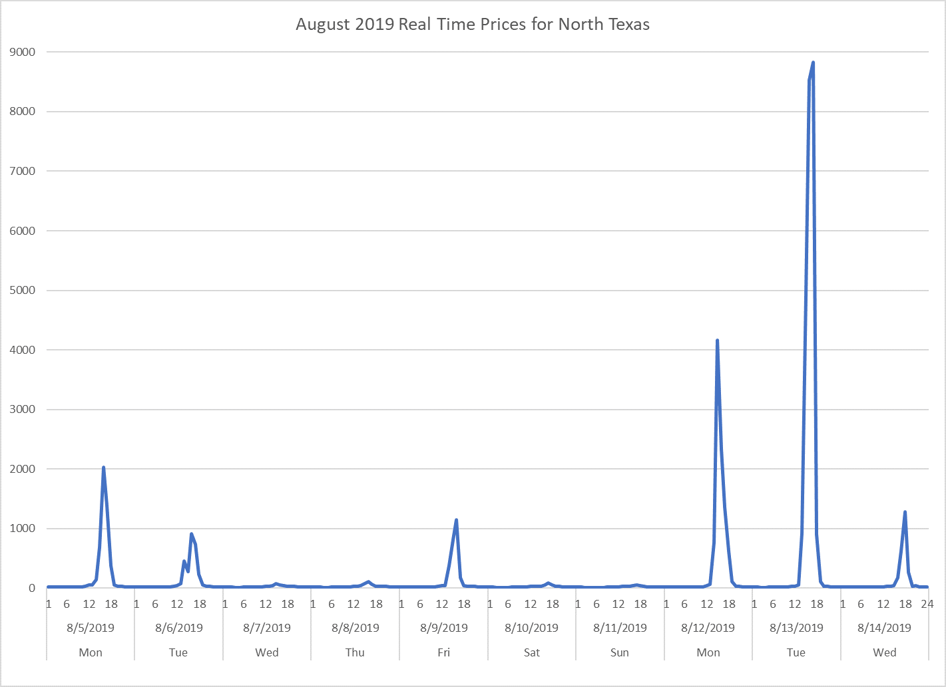 All in all, by the end of this week, we will have set the two highest Real Time Index days in ERCOT history, also making this month the highest index priced month in ERCOT history.  Electricity prices this week surpassed the hottest days during the summer of 2011 (a summer of extreme drought and wild fires across Texas) and the winter snow event of February 2011 when the Super Bowl was in town and rolling black outs were experienced across the Dallas Metroplex.

If we close out August with the balance of the month index prices similar to July, the monthly average index prices for this month will likely settle between $260 to $300 per MWh for On Peak hours (the times when most business use the most power - weekdays from 7 am to 10 pm).  This would make August 2019 the highest of all time in Texas, only behind August of 2011 which settled out around $210 per MWh.

The impact to future summer power prices was also significant.  The On-Peak forwards for the next summer increased by about $35 per MWh since the end of July, which brought the averages for the entire year of 2020 up by about $8.00 per MWh, or about 0.8¢ per kWh.