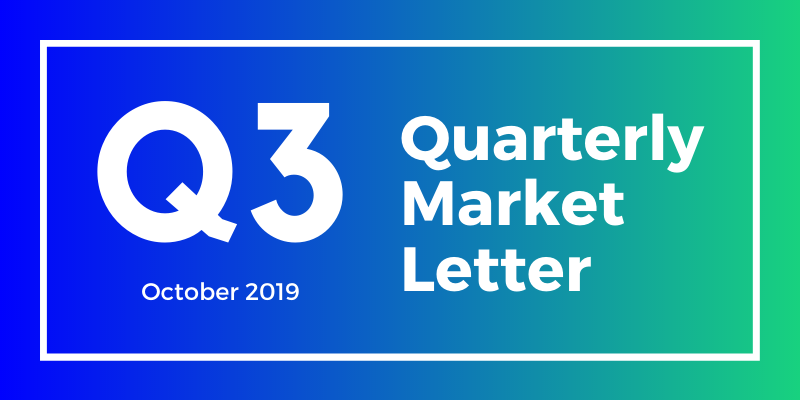 On behalf of the team at 5, I am pleased to forward our market letter for the third quarter of 2019. This letter discusses: (i) electricity price spikes in Texas, (ii) new limits on natural gas usage in New York, and (iii) California’s continued struggle with the linkage between power lines and wildfires.

The breadth and depth of the 5 family continues to expand. Now over 60 strong, the 5 family came together recently to recognize and celebrate the integration of Luthin Associates, our Mexican business, EnergyBy5 Mexico, and one of our strategic partners, Simplified Power, into a single entity. We are thrilled by the solidarity of this one organization and its commitment to helping people and changing an industry.

Texas electricity prices hit historic highs over several days in August. Prices rose from the typical range of $20 to $30 per MWh to $9,000 per MWh during the second week of that month. The chart below shows daily prices during the week of August 12, 2019. 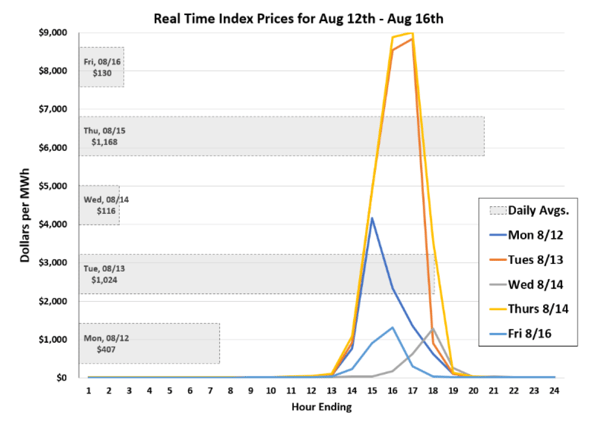 High market prices increased both power generators’ revenue and the electricity price paid by consumers floating at index. Surprisingly, the spike in prices was not correlated to extreme temperature. The chart below shows the temperature during the peak price days in Texas. It was hot, but well within average historical summer temperatures. 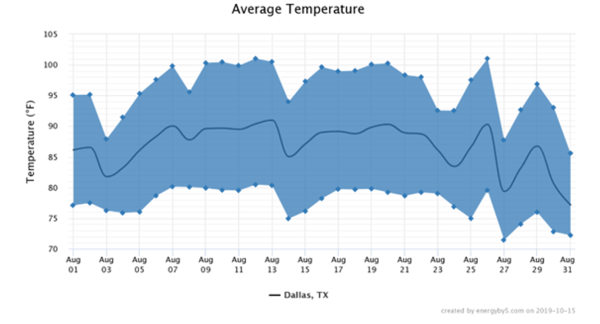 Our lead analyst, Eric Bratcher, believes that these price spikes were actually caused by low output from wind generating assets throughout the state. If this analysis is correct, the ERCOT market is finally showing indications that supply and demand are becoming more balanced. The chart below shows the reserve margin as a percent of peak summer demand since 2013. The declining reserve margin supports Eric’s conclusion. 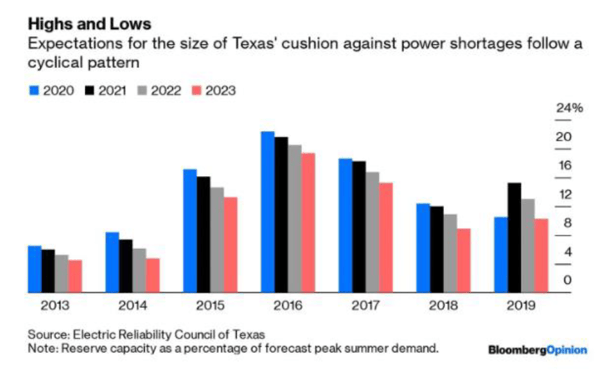 ERCOT expects the reserve margin to be even lower in 2020 and increasing in 2021 and beyond as more power generating assets are brought online. However, as with all projections, there is considerable uncertainty around these forecasts. For this reason, we urge our clients to reduce exposure to the volatility of spot market prices during summer as (i) high temperatures, (ii) low wind output, or (iii) the failure of expected generation assets to come online, could readily send index prices at or near the $9,000 per MWh cap again.

High spot prices also support continued development of solar generation in Texas. The race to put new projects in service is driven in part by the scheduled expiration of Federal tax incentives.1 With so many projects in development, this is a great time to be a credit worthy buyer of renewable power. 5 is actively working with a growing list of buyers interested in long term fixed price contracts that are (i) attractively priced, and (ii) sourced from new solar projects in development.

In New York, the new front in the war on climate change is natural gas. Natural gas is much cleaner than coal, but environmental groups argue that expanding natural gas infrastructure (building pipelines that transport gas, new gas power plants, and/or new buildings that use natural gas) will result in increases in upstream methane emissions and dampen efforts to switch to carbon free sources. Due in part to environmental opposition, permits have not been granted for the construction of the infrastructure needed to support increased usage of natural gas. As a result, in certain parts of the State, the natural gas infrastructure cannot support new natural gas demand. Natural gas shortages have caused gas utilities in Lansing (NYSEG service territory), Westchester (ConEdison), New York City and Long Island (National Grid) utilities to impose restrictions on new gas connections. New customers in these utility territories are unable to connect to the existing natural gas delivery system and customers seeking to return to the system after making renovations are finding they cannot get their gas service restored, even when there is no increase in demand.

These utilities point to the State’s failure to permit the construction of new natural gas infrastructure when defending their gas moratoriums.2 They argue that they cannot get enough gas to serve new customers during periods of peak usage. For example, National Grid imposed its moratorium when the State blocked permitting for the Williams Northeast Supply Enhancement pipeline. As discussed in my prior Quarterly Letter, this relatively short underwater pipeline is needed (according to National Grid) to bring sufficient supply of natural gas from the gas producing regions of Western Pennsylvania to New York City. A map of the proposed pipeline is below: 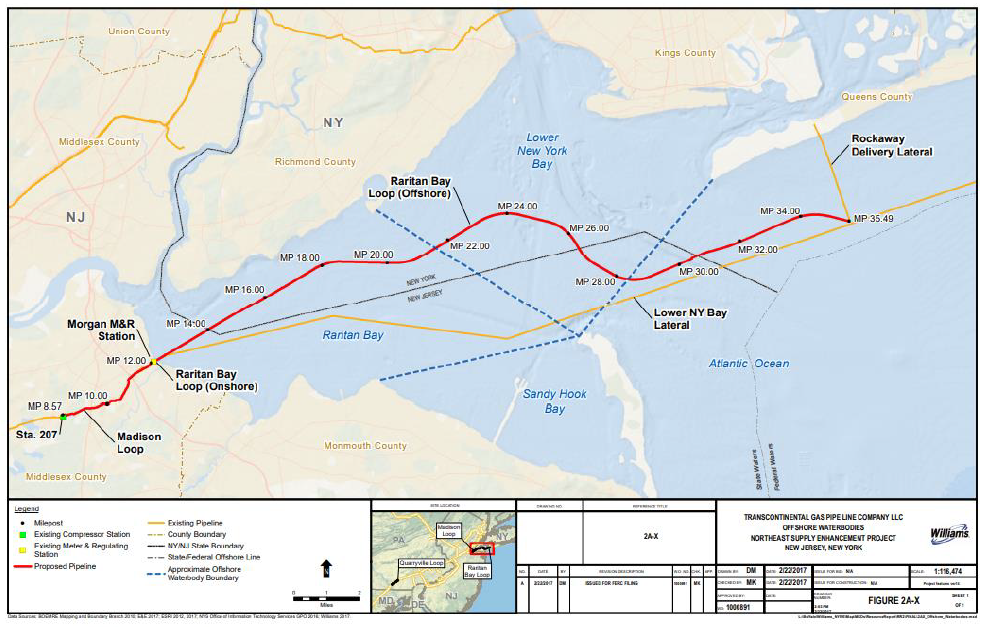 Here is where it gets interesting. Governor Cuomo, who strongly opposed the Williams Pipeline, is equally adamant in refusing to accept National Grid’s refusal to hook up new gas customers. Governor Cuomo recently took National Grid to task arguing that:

"It is the fundamental responsibility of our utilities to provide reliable service .... National Grid has acted in bad faith throughout the process – first by denying over 1,100 eligible customers with service and now by failing to fulfill its core responsibility. Today, National Grid is being ordered to immediately connect those 1,100 customers, and I have directed DPS to expand their ongoing investigation to include potential negligence in not preparing for the months ahead. Make no mistake, New York will hold National Grid accountable.”

The City of Berkeley, CA, voted in July to ban natural gas from all new low-rise residential buildings. The city plans to expand this ban to include commercial buildings and larger residential structures in the near future. San Jose followed suit in September, banning natural gas appliances in new single-family homes and new low rise and multi-family structures. San Francisco, Santa Rosa, Menlo Park and Petaluma are among other cities in California considering similar natural gas bans. These bans do not take effect until 2020. However, there is a more current energy-related crisis in California - wildfires.

Unusually dry and hot weather in 2018 led to unprecedented wildfires throughout California. Under California law, utilities are held strictly liable for damage caused by a wildfire triggered by the utility’s equipment, whether or not the utility was negligent. 2018’s deadliest fire, the Camp Fire (85 deaths, 153,336 acres burned) was triggered by PG&E’s electrical transmission lines. PG&E paid an $11 billion claim over the Camp Fire, and its liability for this and other fires resulted in the utility filing for bankruptcy.

This year, hoping to avoid a repeat of the 2018 fires, PG&E preemptively cut off power to some 2 million customers during a period of high fire risk. Governor Newsom and the utility’s regulator, the CPUC, found PG&E’s actions and the way they were carried out unacceptable. In a tone similar to that of Governor Cuomo, Newsom stated that:

“The unacceptable scope and duration of this outage was the direct result of decades of PG&E prioritizing profit over public safety, mismanagement, inadequate investment in fire safety and fire prevention measures, and neglect of critical infrastructure.…For the thousands of affected residents who rely on power for medical equipment or to refrigerate machines, this communication failure put lives at risk.”

The Governor also requested that PG&E provide rebates of $100 to each residential customer and $250 to each small business impacted by the blackouts.

Ironically, during the same period of high fire risk, Southern California Edison (SCE), the utility for a large portion of Southern California, did not power down a large transmission line near Sylmar, in the Northern San Fernando Valley. The Saddleridge fire (8,300 acres, destroyed 17 structures) occurred while PG&E’s blackouts were in effect. Initial indications are that the Saddleridge fire was triggered by SCE’s transmission line near Sylmar. Not surprisingly, residents of Sylmar are asking why SCE chose not to power down the transmission line that may have sparked the fire.

Regulation and the Energy Market

California and New York’s energy policy illustrate that it is relatively easy to make aggressive environmental commitments. But it does not matter if that policy is designed to limit wildfires or carbon emissions, once the policy causes the power to be turned off, it is very difficult for politicians to accept the status quo. Especially if the status quo means elderly customers losing power to medical equipment.

We see no easy solution to these problems. Climate change and fundamental changes in the economics of energy production are causing a restructuring of the energy markets. Increased government regulation (e.g., subsidizing nuclear plants, banning natural gas, introducing a carbon tax or new renewable credits) all have unintended consequences. Will Texas allow the electricity market price cap to stay at $9,000 per MWh for extended periods of time? Will New York allow utilities to stop hooking up new gas customers? Will California ban natural gas altogether? Each action provokes a reaction. There are many questions but few easy answers.

Of course, please do not hesitate to contact me or other members of the 5 team if you would like more information on renewable purchase opportunities and/or if you would like to discuss the issues covered in this letter in more detail.

1 Solar developers currently qualify for a 30% Investment Tax Credit (ITC) – a dollar for dollar reduction in Federal Tax equal to 30% of the project’s cost. To qualify for the 30% ITC, a solar project must commence construction before 12/31/19 and be in service by 12/31/23. If a solar project commences construction by 12/31/20, the ITC drops to 26%, and for projects that commence construction by 12/31/21, it drops to 22%. For projects that begin construction after 12/31/21, the ITC is only 10%. To qualify for an ITC in excess of 10%, construction must be completed by 12/31/23.
2 New York is no fan of natural gas. In fact, in December 2014 New York banned hydraulic fracturing as a means of extracting natural gas from the state’s plentiful shale reserves.