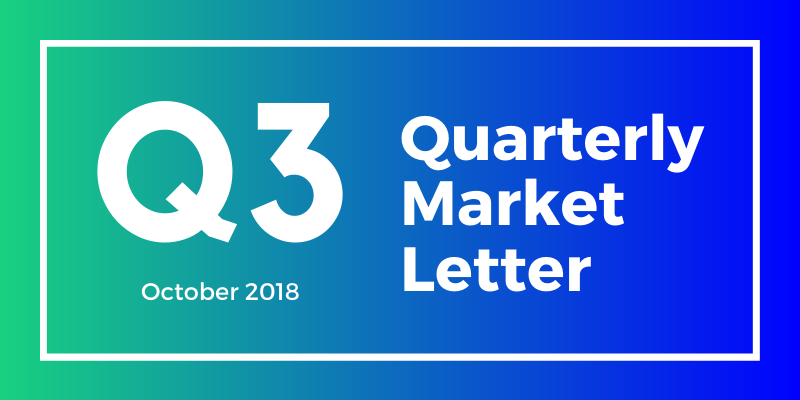 On behalf of the team at 5, I am pleased to forward our market letter for the third quarter of 2018. In this letter we focus on two topics, (i) the increased interest of large corporate purchasers in virtual power purchase agreements with renewable generators, and (ii) the upcoming mid-term elections and the possible impacts such elections could have on state and federal energy policy. I have to start, though, by expressing all of our genuine sadness at the recent passing of Phil O’Connor. Phil was one of the true leaders in in the deregulated industry and was a driving force in the opening of competitive energy markets throughout the country. He also played a pivotal role in bringing retail choice to Illinois. More importantly, he was a fine person who truly cared for others - he will be sorely missed.

We last discussed renewable power purchase agreements (PPAs) in our October 2016 letter. In almost all cases, when a large corporation announces the execution of a renewable PPA, the underlying agreement is a virtual power purchase agreement or VPPA. The corporate buyer does not actually consume the renewable electricity it purchases in a VPPA. Instead, the renewable power is sold at or near the location of the power plant. The corporate buyer is credited with the production of renewable power (and often purchases the renewable energy credits generated by the plant at an agreed price). The electrons generated by the plant are sold by the plant owner as and when generated. If the price negotiated in the VPPA is lower than the local market clearing price, the corporate purchaser is paid the difference. If the VPPA price is higher than the market price, the corporate purchaser pays the generator the difference.

The chart below on the left outlines a standard VPPA transaction. The illustration on the next page demonstrates how the VPPA settles based on the market price.

If electricity prices rise over the term of the VPPA (typically 10 or more years), these agreements will be assets of the corporate purchaser. If electricity prices fall, the VPPA will be a liability of the corporate purchaser. Corporate buyers generally assume that the downside is limited, and either way, they will reap the benefits of being a supporter of carbon free generation.

Several trends help explain the growing VPPA demand. First, and perhaps most important, the price of renewable power has dropped significantly. For example, we are seeing PPA offers in ERCOT for long term fixed price contracts at prices that are approximately 50% less than prices we saw only a few years ago. Second, corporate renewable buyers are increasingly focused on “additionality”- the ability to demonstrate that their actions directly impacted the development of carbon free generation. Instead of just purchasing renewable energy credits which simply provide revenue to existing renewable assets, a VPPA with a to be developed renewable plant directly supports the construction of a new asset that will displace generation from traditional plants that are more carbon intensive. Third, an expanded choice of different projects, locations and technologies allows a VPPA buyer to mitigate risks associated with earlier VPPAs. 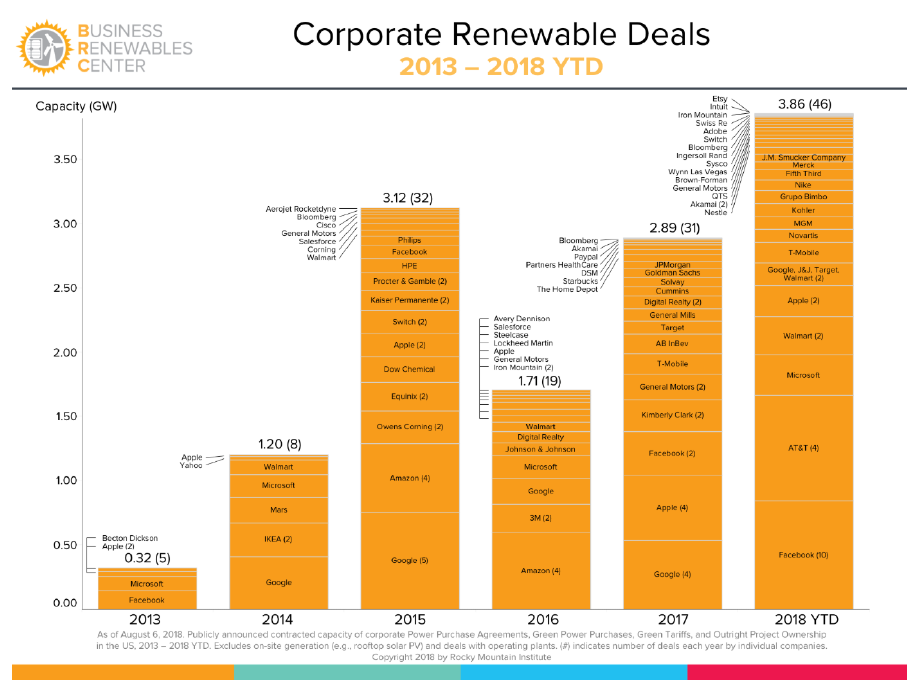 Recent transactions demonstrate the degree to which VPPAs are not just ways to meet climate goals, but are increasingly complex risk management tools as well. For example, in September, Kaiser Permanente finalized a 180 MW purchase of renewable power from NextEra. The project combines a 131 MW solar farm and a 110 MW battery storage facility in Riverside County, California with a 50 MW wind farm in Arizona. The plants are at the development stage and expected to be completed in 2020 and 2021. While we do not have access to project documents, the combination of technologies with different production shapes as well as battery storage appears to be an effective way to mitigate Kaiser’s exposure to potentially high peak electricity prices in California.

Another byproduct of corporate demand for renewables is that regulated utilities are increasingly active developers/owners of renewable power generation plants. Regulated utilities are paid a rate of return based on the size of their rate base. Since there are few reasons to develop new natural gas or coal power plants, one way to increase the size of a utility’s rate base is by building renewable generation. At the same time, since renewable plants do not pay for fuel, utilities can use renewable generation to help prevent rate increases (particularly in the event that the price of natural gas increases). Instead of fighting for regulations that subsidize coal power plants, utilities are starting to see renewables as an economic way to meet customer demand, while also increasing shareholder value.

The November elections are less than a month away. The Trump administration’s deference to state regulation and several recent court cases weakening the strength of Federal regulations has increased the importance of state energy policies. Energy issues are on the ballot in several states. A few of the more important energy issues that will be voted on in November are discussed below.

On the top of our list is a proposed carbon tax in Washington State. As we noted in our July letter, the NYISO introduced a carbon tax in June, and the announcement had an immediate and dramatic impact on future electricity prices in that state. In Washington State, Initiative 1631 would set a fee of $15 per metric ton on carbon emissions beginning in 2020. This fee is scheduled to increase by $2 per ton every year. If passed, the carbon tax would materially increase electricity rates. In New York, we estimated that a $20-40 per metric ton carbon tax would increase electricity rates by around $0.02/kWh. Unlike the NYISO proposal which only impacts energy generators, the Washington State fee would be assessed on almost all carbon emitters. Not surprisingly, Initiative 1631 is opposed by five major oil companies including BP and Chevron and several public utilities.

Advocates of retail choice are closely watching the voting on Question 3 in Nevada. This ballot initiative, if passed, would direct the Nevada legislature to “minimize regulations on the energy market and eliminate legal energy monopolies.” This ballot initiative was approved in 2016 but Nevada law requires amendments be approved in consecutive elections. Choice is strongly supported by Sands Casino and its owner, Sheldon Adelson, who have teamed up together with renewable focused data storage company, Switch. Nevada casino owners have long pushed Nevada to open up the market to competition as a way for them to lower their cost of electricity. NV Energy, the Nevada utility owned by Warren Buffet’s Berkshire Hathaway, is the strongest opponent.

The same alliance between environmental groups and regulated utilities that was critical in winning support for subsidies for uneconomic nuclear plants in New York, Illinois and New Jersey, now threatens the initiative’s success. NV Energy proposed to double Nevada’s renewable energy generation but only if voters reject Question 3. This strategy appears to have worked as environmental advocates such as NRDC and the Sierra Club recently announced their opposition to choice and are warning their members that a restructuring of the market would have a negative impact on renewables.

While not directly related to the upcoming election, it is interesting to note that in August 2018, three of Arizona’s Corporation Commissioners (ACC) asked the commission to explore retail choice. The ACC is an elected, five-member executive commission that oversees public utilities in the state. Retail choice was last considered by the State in 2013.

In Nevada, Question 6 would increase the state’s RPS standard to 50% by 2030. The current RPS in Nevada requires utilities to purchase 25% of their power from renewable resources by 2025.

The renewable ballot initiatives in Arizona and Nevada are financed by NextGen Climate Action, an organization founded by Tom Steyer. Steyer’s support for these initiatives is driven in part by the two states’ abundance of solar resources. Unlike in the retail choice debate, NV Energy has not taken a public position on Question 6. Question 6 is expected to pass, but it would have to pass in 2020 as well under Nevada law. At that time, we may see NV Energy oppose the measure in the same way they are opposing Question 3 this year.

It is unclear if the midterm elections will have a significant impact on Federal energy policy. One thing to watch is the composition of the Federal Energy Regulatory Commission (FERC), which is comprised of five commissioners. Currently, there is one vacant seat on the commission. Of the four sitting commissioners, two are Republicans and two are Democrats. President Trump has nominated Bernard McNamee, the head of the Energy Department’s policy office to fill the remaining open seat. McNamee’s appointment requires Senate confirmation, and the Senate will not consider the appointment before the mid-terms. In the event that the democrats gain a majority in the Senate, President Trump may have to consider a less partisan appointee. A strong democratic showing in the mid-term elections could also hurt President Trump’s efforts to support coal generation and turn back many of President Obama’s environmental policies.

As always, please do not hesitate to contact me or other members of the 5 team if you would like more information on renewable purchase opportunities and/or if you would like to discuss other issues covered in this letter in more detail.