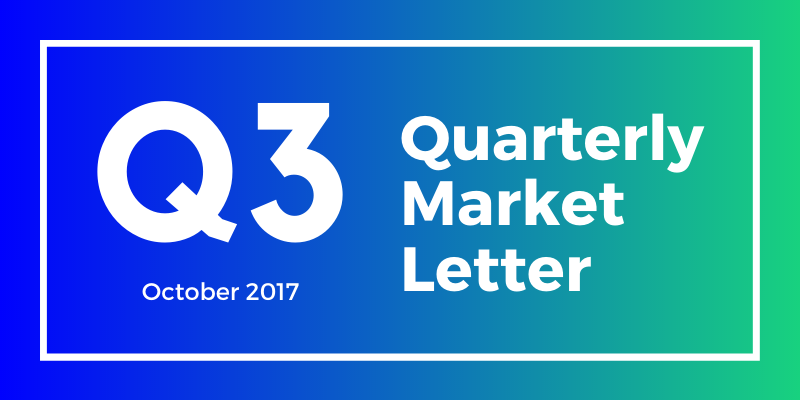 On behalf of the team at 5, I am pleased to forward our market letter for the third quarter of 2017. For many years, the energy market has seen a direct correlation between extreme weather events, high electricity prices, and regulatory changes. Q3 was different. It set records for extreme weather, but we did not see a corresponding increase in energy prices. Still we saw significant regulatory changes tied in part to weather events. In October, Energy Secretary Rick Perry, citing recent storms, announced new rules to compensate coal and nuclear plants for their ability to operate through adverse weather events. This letter focuses on the relationship between weather, energy prices and regulatory change.

Two good examples of the historical correlation between extreme weather, volatile energy prices and regulatory change are record heat in Texas in 2011 and the record cold in the Northeast in 2014. In August 2011, temperatures were extremely high throughout Texas. Electricity usage hit all-time records and prices spiked for sustained periods during the month. For example, on August 9 the peak temperature in Dallas was 107° and the day ahead price for peak electricity (from 7am to 10pm during the week) was $592.40/MWh, that’s 59.24 cents per kWh! The chart below shows the direct correlation between heat, load and price. 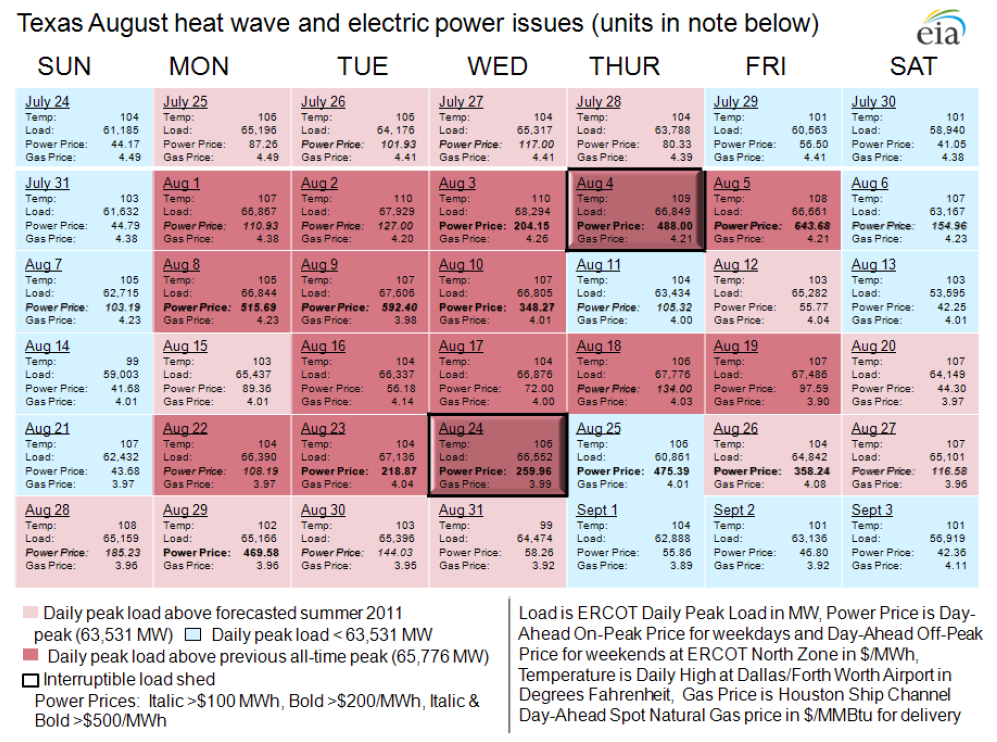 ERCOT lacked sufficient power reserves or sufficient connections to other power markets to address the unexpected demand. Regulators responded to the unusual weather and shortage of reserves by significantly increasing the price cap – the maximum amount that wholesale prices can trade at during an energy shortage. The cap went from $3000/MWh to $4,500/MWh in August 2012, and continued to move in stages up to $9000/MWh, or $9/kWh, in June 2015. By raising the cap on wholesale prices, ERCOT increased the value of a wide variety of energy assets including on-site generation. As a result, significant new sources of generation entered the market. Due to a variety of factors (relatively mild weather and significant increases in wind generation), the ERCOT market has not faced further shortages, however, the system’s ability to withstand record head remains untested.

In the Northeast, the relationship between weather, price and regulation was very  similar. In the winter of 2013-14 there was an unprecedented cold snap – a Polar Vortex - in the Northeast which resulted in record winter peak electricity demand. The graph to the right charts the weather in January 2014.

Unfortunately, when the weather was coldest and the need for power greatest, 22% of the generation capacity in PJM was out of service. This combination of events resulted in the extremely high prices shown to the left.

increases in their monthly energy spend. In response to the Polar Vortex, regulators proposed a significant change in the capacity market.1 PJM was unwilling to trust market forces to address the shortage as ERCOT had done in Texas. Instead of raising the wholesale cap to allow the market to respond, regulators introduced a new capacity product, Capacity Performance. This increased payments to generators that could operate during adverse summer and winter weather events. Due to relatively mild winters since 2014, PJM’s solution to the Polar Vortex has also not been tested by extreme weather.

The Summer of ’17: Severing the Connection Between Weather and Price 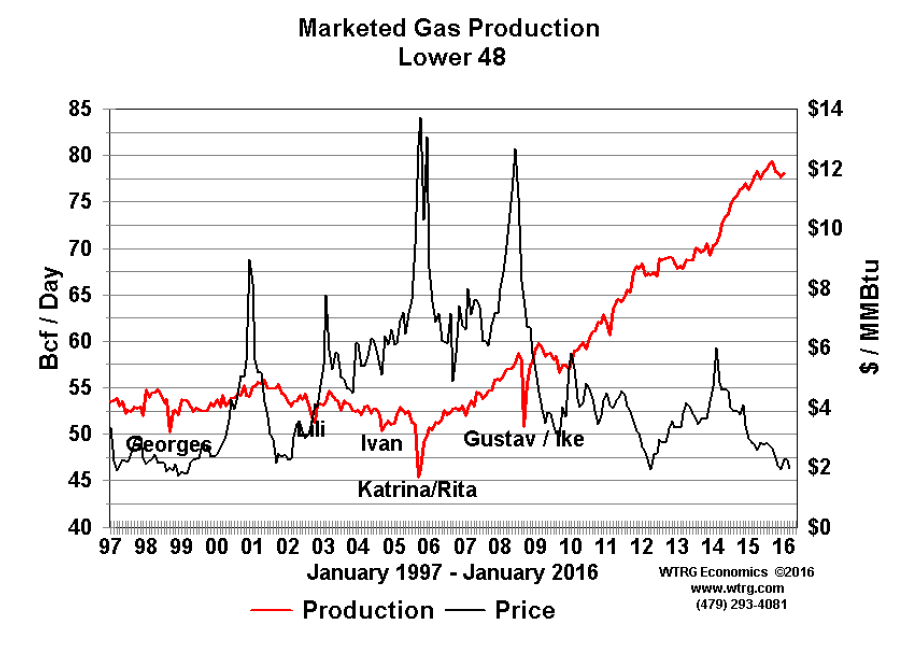 This summer we saw an end to the long streak of mild summer storms. The 2017 hurricane season is one of the most active in history. Ten consecutive Atlantic storms became hurricanes, tying a record dating back to 1893. The graph at the left shows the timing (so far) of 2017 hurricanes, and the history making storms of September – Harvey, Irma, Jose and Maria.

The chart below shows the change in spot natural gas prices over the same period. In a clear departure from 2006 and 2008, the hurricanes had little if any impact on the market price of natural gas and electricity. 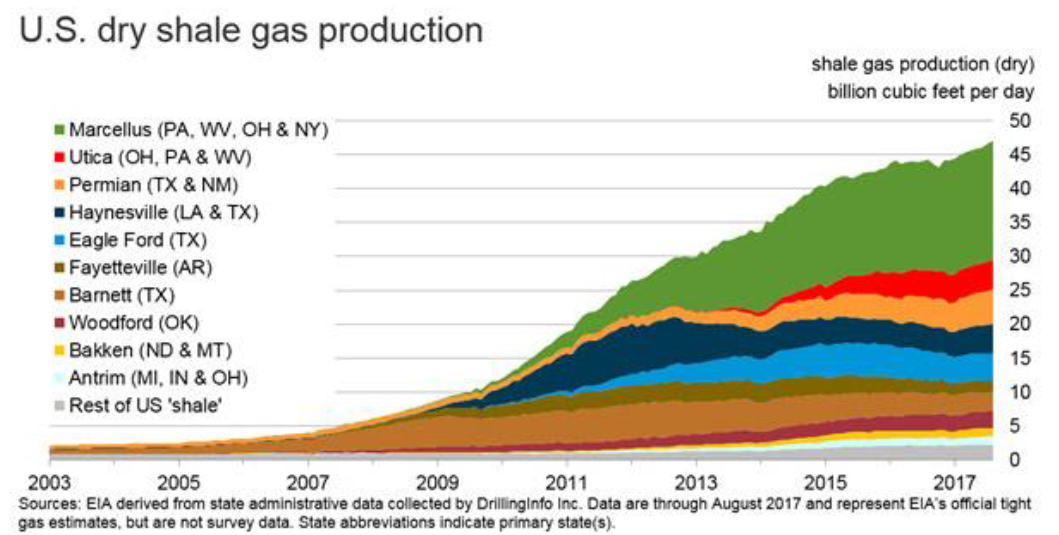 As noted earlier, the absence of a price spike has not stopped new regulations tied to the recent adverse weather.

Weather and Energy Risk – The Department of Energy’s Proposed Rule

Secretary Perry’s proposed rule is designed to halt the continued retirement of nuclear and coal plants, which the administration claims is the result of the free market’s inability to properly compensate reliability. The same logic – the free market’s inability to property compensate carbon free generation - was used by various regulators to support tax incentives for wind and solar generation and renewable energy credits for carbon free generation.

The Department of Energy claims that emergency action is needed to insure reliability of power supply, however, none of the regional transmission organizations that are impacted by the proposed rule agree with Secretary Perry that supply is inadequate to address weather risk. The debate over Secretary Perry’s plan has just begun. As long as natural gas prices remain low, the high cost of subsidizing coal plants places considerable political risk on the long-term survival of these payments. In addition, there is no bipartisan support for coal generation. In contrast, the Zero Emission Credit (ZECs)2 payments offered to nuclear plants in Illinois and New York were the result of bipartisan support. Environmental groups support ZECs as a way to achieve carbon reduction targets. Lawmakers saw them as a way to avoid significant job cuts. And large and well capitalized nuclear plant owners like Exelon used their political muscle to pressure legislators and regulators to support the payments. Coal plants do not have a comparable coalition of supporters.

From our perspective, it is unlikely that many operators of coal plants will change their investment decisions based on Secretary Perry’s proposed regulations – it is simply too risky. Luminant’s recent decision to retire 2,300 MWs of coal fired generation in Texas is a good example of the challenges faced by coal generators. Policy makers from both parties need to better understand the value of competition and think hard before introducing regulations that further interfere with the free market. For our clients, we recommend caution as the market continues to adjust to coal plant retirements, volatile weather and regulatory risk.

1 ERCOT uses an energy only market to control supply and demand. In PJM, NYISO and NEISO regulators have been unwilling to fully trust the energy market to assure adequate supply. For this reason, a capacity market is used and generators receive capacity payments for being available to run.