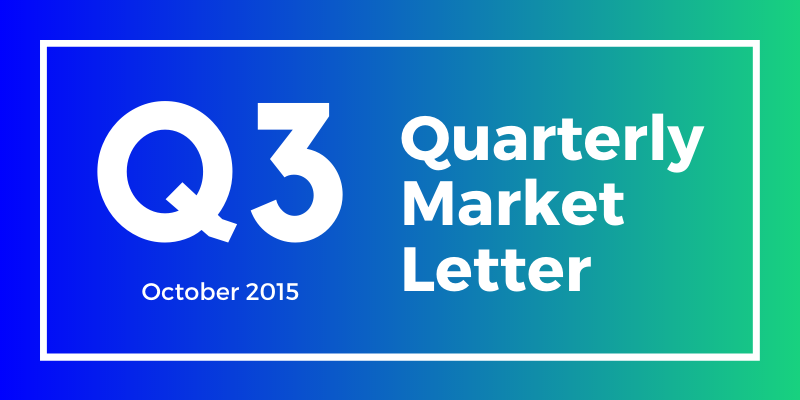 I am pleased to forward 5’s third quarter overview of the energy market. In this quarter, energy markets continued the stable trend that characterized both Q1 and Q2. We continue to urge clients to take advantage of these historically low prices. The energy market’s price movement during the first three quarters of 2015 is shown in the following chart:

Important developments in the Mexican energy market are the lead story in this Quarter’s letter. While the focus of this issue is Mexico, we also touch on several important developments over the past quarter including: (i) changes to the capacity market in PJM, (ii) heightened interest by solar developers in the commercial and industrial market segment, and (iii) the Supreme Court’s decision to try to provide some much needed clarity on where federal regulation of wholesale energy markets ends and state regulation of retail energy markets begins.

The Mexican electricity market is the first significant new market to open to retail competition in years. Deregulation in Mexico has accelerated to the point that we felt we needed to get a firsthand look at the market. In August, 5 visited Mexico City and sat down with a wide variety of parties involved in the deregulation of Mexico’s energy market. In our discussions with consumers, regulators and various service providers, we saw many parallels to market openings in the US, Canada, and England.

The Mexican energy market is comparable in size to Texas, with approximately 54,000 MWs of generation and over 250 million MWhs of energy sales. 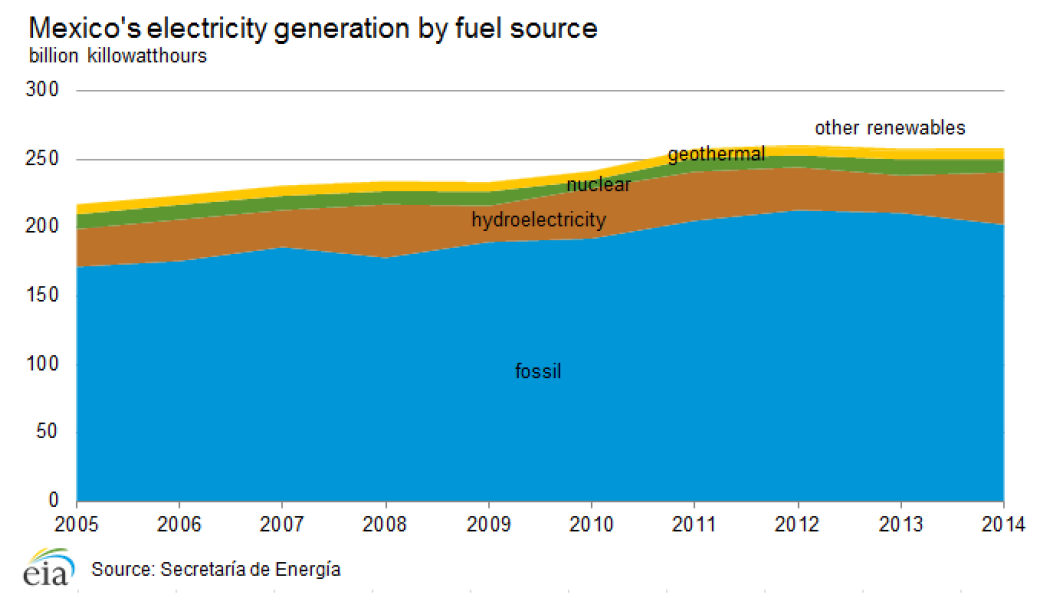 By opening the Mexican market to competition, deregulation should reduce the price of electricity and, in turn, increase Mexico’s strong and growing manufacturing base. The IMF suggests that “reductions in electricity tariffs derived from the energy reform, could increase manufacturing output by up to 3.6 percent, and overall GDP by 0.6 percent.” Even more significant improvements could be seen if Mexico is able to reduce electricity prices to the levels seen in low cost markets like Texas.

Mexico continues to show the political will needed to open its energy market. Retail energy deregulation in the United States was accomplished piecemeal. One by one, states passed legislation and took the regulatory steps necessary to open retail markets to competitive forces. Many states continue to have fully regulated electricity markets. Unlike the United States, Mexico’s deregulation required a Constitutional amendment to narrow the scope of energy related activities that are defined as “public services,” and as such, are the sole responsibility of the state.

Changes to the constitution were made in December 2013, and implementing legislation was passed in August 2014. If deregulation in the US required a constitutional amendment, we would still be waiting for the energy market to open.

Prior to these market reforms, the Comisión Federal De Electricida (“CFE”), controlled the production, transmission, distribution and marketing of electricity in Mexico. Once deregulation is completed, only transmission and distribution will remain regulated. All other aspects of the energy market will be subject to competitive forces. CFE will become a competitive entity allowed to participate in all segments of the market (although still owned and controlled by the state). In addition, CFE will continue to provide Mexico’s version of default or basic generation services to residential and small commercial customers under regulated rates. The follow diagram shows how the new market will function: 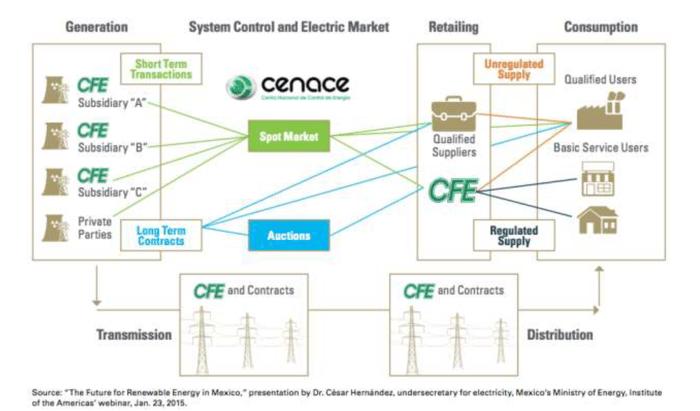 Similar to other deregulated markets, Centro Nacional de Control de Energía or CENACE, will function as an Independent System Operator or ISO. Prior to deregulation CENACE was a part of CFE. Comisión Reguldoa de Energía (“CRE”) will regulate the wholesale market.

There are many issues still to be worked out and, as with any new market, there remains a significant amount of regulatory risk. There are also some structural challenges. For example, CFE owns 85 percent of all generation capacity in Mexico. In addition, while competitive wholesale generators can decide at what price they offer electricity into the market, market prices will be subject to regulatory oversight. As we understand the proposed rules, generators will be required to submit (on a daily basis) their operating costs to CENACE, and CENACE will have the ability to insure that bids are not out of line with operating costs.

In spite of this uncertainty, companies with significant operations in Mexico have an immediate opportunity to more actively manage their energy costs. Companies that use 2 MWs or more in electricity can purchase electricity directly from a generator or from CENACE. In 2016, the threshold for choice drops down to 1 MW. The team at 5 is very excited to be an active participant in this new market and applauds Mexico in taking the courageous steps to embrace competition. We look forward to working with current and future clients as competition is rolled out to retail consumers.

In August and September, PJM concluded its first capacity auctions that included its new capacity product, Capacity Performance. Unlike an energy only market (for example, Texas), the PJM market structure includes capacity payments. These are fixed annual payments made to generators (and demand response providers) for being available to meet the grid’s maximum electricity demand. The payments are made even if the capacity resource does not run and sell energy into the wholesale market. Capacity prices are set at auctions run by PJM. In theory, this fixed revenue stream makes it easier for developers to finance new generation.

At the time of the Polar Vortex, capacity resources in PJM were only required to meet annual performance requirements. They could meet these requirements without being available during all emergency events. Due to shortages of natural gas and operational constraints, a significant amount of capacity was unavailable during the winter of 2013/14. In response to these operational issues, PJM adopted a new definition of capacity, “Capacity Performance”. To qualify for Capacity Performance, resources must be available every time PJM calls an emergency event. If a capacity resource does not perform as promised during such event, it is subject to significant penalties. The new capacity rules make it very difficult, if not impossible, for  intermittent and summer-only resources (such as demand response and solar generation) to qualify for Capacity Performance payments.

Clients in PJM (e.g., Maryland, New Jersey, Pennsylvania, District of Columbia and Illinois), can expect the increase in capacity costs to impact rates in 2016 and beyond. This is true even if you are being served under a fixed price contract as the increased costs from these capacity auctions can generally be passed on to consumers under the change in law provisions contained in most retail contracts.

Commercial and Industrial Customers: A New Focus for Solar Developers

Solar activity in the commercial and industrial space increased significantly in the third quarter. We have been working with several leading solar companies that are now targeting commercial and industrial customers in various deregulated markets, including Texas. This focus is driven in part by the federal investment tax credit (ITC). Solar projects completed by December 31, 2016 receive a 30% investment tax credit. This effectively reduces the project cost by 30%. For projects that are completed after December 31, 2016, the ITC drops down to 10%. Until recently, large solar developers have been focused on utility scale projects. These large projects take too long to permit and construct for any new large projects to be completed by the December 31, 2016 deadline. There is still time, however, to complete small projects (rooftop or ground mounted) for medium and large C&I customers. In addition, solar costs continue to drop at a rapid rate. For C&I clients interested in a long term fixed price for electricity, this is an excellent time to consider solar options. However, in order to meet the December 31, 2016 deadline, projects should be initiated by the end of this year.

In earlier letters, we discussed the ongoing legal and regulatory disputes between federal and state regulation of the wholesale and retail power markets. On October 14, the Supreme Court heard oral arguments in FERC v. EPSA (Electric Power Supply Association). This case seeks to resolve whether FERC’s Order 745 is a permissible use of FERC’s regulatory authority. Order 745 established that demand response resources (retail customers) are paid the same price for reducing demand that generators are paid when they generate electricity. The legal arguments depend on whether demand response is a wholesale or retail product. FERC has authority to regulate the sale of wholesale electricity and to ensure that rules and regulations affecting wholesale rates are “just and reasonable.” Regulation of retail sales are the responsibility of the states.

EPSA, arguing largely on behalf of energy generators, maintained that FERC overstepped its jurisdiction by setting the wholesale price for demand response, which effectively set how retail customers will be paid for reducing demand. Increasing the amount (and value) of demand response resources reduces the value of generation assets. Justice Alito recused himself from this, and it is speculated that the remaining Justices were split, 4/4.

This may explain why later that same week the Supreme Court agreed to hear two other cases that sought to clarify federal and state jurisdiction over power regulation (Hughes v. PPL EnergyPlus and CPV Maryland v. PPL EnergyPlus). As with the FERC Order 745 case, these cases were brought by generators. This time, though, generators objected to state sponsored subsidies/incentives offered to developers of new generation projects in NJ and MD. Switching roles from the FERC Order 745 cases, generators now champion FERC and argue that the NJ and MD’s actions conflicted with the FERC’s role to regulate wholesale prices. Since the NJ/MD
cases will be argued before a decision is made in the FERC Order 745 case, generators will need to be careful as they argue for a broad role for FERC oversight of wholesale rates in the new generation cases, and a limited role for FERC oversight of demand response. The Supreme Court’s rulings are likely to have broad impact on future energy regulation, including, among other things, the legality of state incentives for renewable power. Hopefully, the Court’s holdings will give some much needed clarity to the regulation of power markets.

We do not expect this regulatory uncertainty to slow the ongoing transformation of the energy market. We continue to see dramatic improvements in many energy technologies including energy storage, lighting technology, solar and wind generation, and on-site generation that will continue to impact retail clients and energy prices. The team at 5 has responded to these developments by expanding our knowledge and resources so that we can support clients in all aspects of energy management. We look forward to working with all of you to maximize both near and long term opportunities.

What Happens When the Wind Stops Blowing?