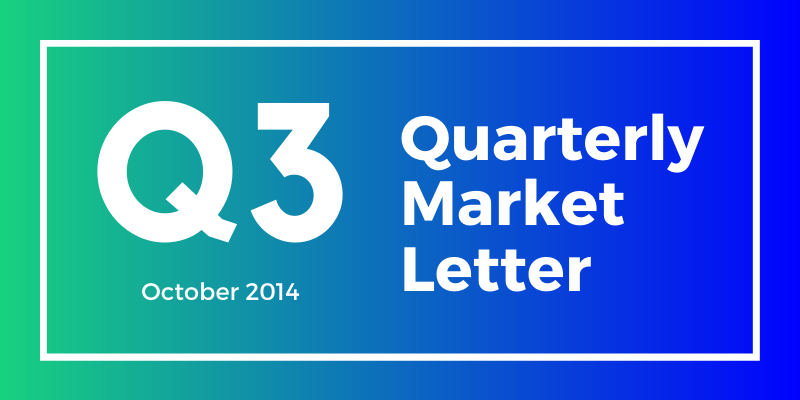 I am pleased to forward 5’s third quarter overview of the energy market. The speed and scope of changes to energy market continues to astound us. In this letter, we focus on the impact that changes in technology and consumer demand are having on another major industry player, traditional utilities, as well as the potential impact of such changes on our clients.A lead story by Rebecca Smith in the WSJ on July 28, 2014, “Electric Utilities Get No Jolt From Gadgets, Improving Economy – Electricity Sales Anemic for Seventh Year in a Row”, summarizes this turmoil very well. The story observes that for the first time, an improving economy and consumers’ purchases of more and more energy consuming devices, are not translating into increased consumption of electricity. This trend is reflected in current electricity and natural gas prices.

While August is usually a time for high electricity prices, energy markets in New England, the Mid-Atlantic States and New York City set 12 month low prices this past August. This reflects lower demand and low natural gas prices. The EIA chart below shows these prices compared to a yearly range.1 The conclusion for our clients is quite obvious, this is an excellent time to purchase electricity and natural gas.

The same macro story is playing out in Europe. The headline of an October 22nd story in the FT reads, “Utilities companies search for new business models as losses mount.” Just one example, Sweden’s state owned utility, Vattenfall, sees a market with an excess supply of energy and sluggish demand. At the same time, utilities in the United States and Europe are burdened with the cost of maintaining an aging infrastructure and addressing new ways to limit CO2 emissions, particularly those from older coal fired power plants. The following graphic demonstrates the challenge faced by utility companies: 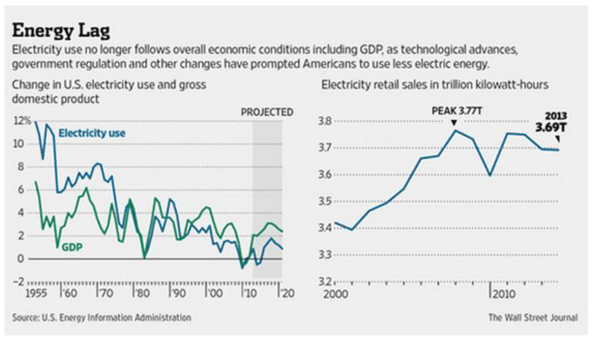 Reasons cited for this de-linking of economic growth and energy consumption include dramatic increases in energy efficiency, and the growth of on-site generation. Each time a residential consumer installs a solar array on their roof, the utility’s load is reduced by the amount of the new solar generation. A recent report from the Lawrence Berkeley Lab shows the potential impact on utilities’ earning of distributed solar becoming 10% of the electricity mix.2

Utilities lose revenue at a much higher rate than the reduction in costs as a result of lower customer demand. Over time, regulated utilities will try and recapture these losses through rate increases, however, this takes time and in the interim, utility earnings suffer.

On-site generation is only one reason for the decline in energy demand. Increased efficiency of lights, motors and all others aspects of energy consumption reduces load growth as well. A 2005 refrigerator used approximately 840 kWh/yr. of electricity. A 2010 model refrigerator consumes 435 kWh/yr. Consumers today spend only 5% of their disposable income on energy, a lower percentage than the average spent in the 1960s even though consumer energy prices have grown faster than the rate of inflation over the same period.3

New technologies focused on reducing peak energy demand will cause further erosion to utility earnings. One of the most significant of these technologies is energy storage. To date, the wide scale use of on-site generation to meet grid demand has been limited, in part, by the inability to economically “store” electricity.4 Wind farms generate more power at night and are not likely to be operating near peak levels when the grid needs maximum generation, the middle of a hot summer day. Solar plants operate at their peak on the hot summer day but generate very little when it’s overcast or at night. If utilities and homeowners could store energy cost effectively, the grid would be able to integrate a wide variety of distributed generation resources more easily.

Recent improvements in battery technology may be an important part of the solution. Over the last three years, lithium batteries (which power the Tesla and other electric cars) have declined in price by 40%. Their price is expected to decline an additional 40% over the next three to five years. This material decrease in costs will significantly broaden the application of these batteries to the energy market. Navigant (an energy consulting firm) projects that the market for battery storage will grow to over $2.5 billion in 2023.5 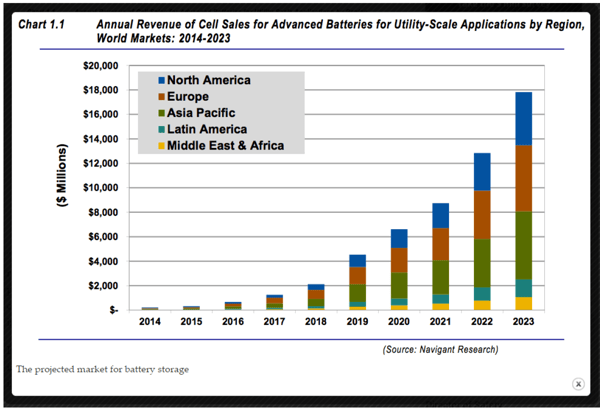 As with the roll out of other renewable technologies (such as wind and solar power), regulatory incentives will accelerate this trend. California’s Public Utility Commission has mandated that the state’s utilities purchase 1,300 MW of energy storage by 2024. In response to this mandate, San Diego Gas & Electric is now soliciting at least 25 MWs and up to 800 MWs of energy storage. Companies are quickly changing their business models to take advantage of these incentives. Distributors now offer both light commercial (30kw-60kw) and commercial/industrial (200kw-400kw) battery installations for customers in California. These batteries can either be installed with or without a related rooftop solar project. We are currently evaluating this technology for a quick service restaurant client with 80 locations in California. The economics are promising, with the potential to reduce demand charges by as much as 20% and achieve a 5 year payback. These economics are driven by (i) generous rebates offered by the state, (ii) significant demand charges, and (iii) high peak power prices.

For utilities and merchant owners of generation plants, these trends have upended their basic business model. FirstEnergy (FE) CEO Tony Alexander summed it up when he stated “It’s pretty much a lost decade.” The utility response falls into two very different camps: fight and switch. The fight is being led by FE. As noted in last quarter’s letter, FE is the plaintiff in legal action brought at FERC to reduce customers’ ability to sell as “a generation equivalent” curtailable load or run on-site generation. FE has asked FERC to remove these energy reduction programs from the capacity market in the Mid-Atlantic states. Capacity payments are made to suppliers that are able to produce energy (or in the case of demand response, reduce consumption) when called upon by the electricity system operator. In the last several years, demand response (DR) in the Mid-Atlantic States has accounted for a significant amount of market Capacity, reducing both the price of Capacity and the quantity purchased from traditional generators such as FE.

NRG, an owner of both generation plants and large consumer focused retail businesses is responding to the pressure on traditional utilities and generation owners in a very different manner. Its “switch” approach was spelled out in detail by CEO David Crane when NRG presented its Q2 results on August 7, 2014. Crane addressed directly the comments of Rebecca Smith at the WSJ. Instead of joining FE it is regulatory fight, NRG has radically shifted its business and now characterizes its business into three main groups, NRG Business, NRG Home and NRG Renew.6 The following chart summarizes these different value propositions:

Not surprisingly, NRG has taken a very different position from FE and other pure play generation owners. NRG filed a motion in opposition to FE’s efforts to have DR resources excluded from Capacity markets. While NRG’s generation assets would gain from PJM throwing out the results from the 2014 PJM Capacity Auction, NRG argued that “the fundamental harm to the market that would result from resettling settled capacity auction prices outweighs any short-term financial benefits.” This may be true, but it is also true that NRG has a much greater stake in a successfully functioning retail market, a position not shared by FE and many other generation owners.7

Some European utilities are following the same strategy as NRG. They are looking into “possible new business models in the sector [which] include flexible energy consumption, when utilities become experts in energy conservation and storage, rather than generation.” You know something radical is going on when the CEO of Germany’s iconic energy giant, RWE, states “My dream, my vision is that RWE will put solar panels on your roof, a battery in your shed, a heat pump in your cellar, and we will also manage this complex energy system for you. We want to be the holistic energy manager of the future.”8

At 5, we are realistic observers, and we take seriously the efforts of companies like FE to turn back the clock on customer curtailment programs and other innovative technologies. The big monopolists will not give up without a fight and you will be hard pressed to find a group with more experience fighting regulatory battles than North America’s leading utilities. We will continue to actively monitor current and future regulatory challenges. Fundamentally, though, we share the view of those energy companies that see competitive markets and new products, such as demand response, as an opportunity not a threat. Continued innovations present a great opportunity for our clients. The potential applications (peak shaving, real time price arbitrage, demand response) are numerous and will give informed customers considerable leverage when working with energy suppliers. As described above with energy storage in California, we continue to find new and innovative ways to use new products to help clients manage exposure to energy prices.