The State of New Jersey has been at the forefront of an ongoing conflict between a state’s right to establish its own clean energy goals and its participation in a regional competitive electricity marketplace. New Jersey belongs to the PJM Interconnection (PJM), which spans all, or parts of 13 states and the District of Columbia as shown below in Figure 1. New Jersey and many other states want to adopt their own clean energy standards. However, grid operators, such as PJM, are finding it nearly impossible to create a competitive marketplace with consistent rules among states that have very different renewable power goals and carbon emission standards.

In December 2019, the Federal Energy Regulatory Commission (FERC) directed PJM to modify a pricing mechanism known as the Minimum Offer Price Rule (MOPR), which critics claim put renewable power assets at a disadvantage compared to other types of generation not subsidized by state programs or mandates, including coal and natural gas plants. 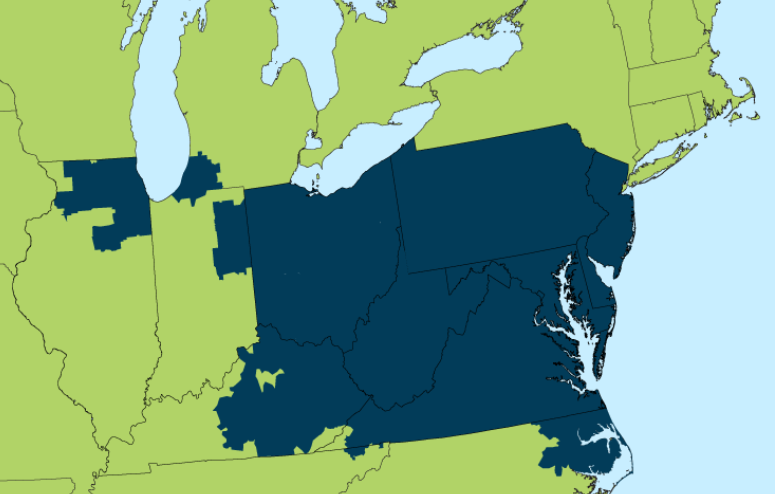 The State of New Jersey’s clean energy standards is at odds with PJM’s MOPR. According to its 2019 Energy Master Plan, 7,500 MWs of New Jersey’s electricity is to come from offshore wind sources by 2035 and 100% of the state’s electricity is to be carbon-free by 2050. On April 16th, the FERC upheld its previous ruling from December 2019 that upended the current regulatory framework within PJM. Through that ruling, the FERC commissioners voted to apply the MOPR to almost all generation that receives or could receive a state subsidy. The original intent of the MOPR was to provide a price floor that would prevent new market entrants from under-bidding other generators, lowering the price of capacity and ultimately discouraging the construction of new power generating assets. However, critics claim that this subverts the state’s clean energy goals by raising the minimum price these state-subsidized resources are allowed to offer into the capacity market. This decreases the likelihood that these new assets could clear the auction, and would prevent them from receiving the necessary auction revenues needed to be competitive.

In the wake of FERC’s ruling, New Jersey regulators were charged with examining ways in which the state could continue to pursue its aggressive clean energy goals while operating within PJM’s market paradigm.

One solution was to withdraw from PJM altogether. However, withdrawing from a regional marketplace such as PJM is very complicated and not dissimilar (although clearly on a much smaller scale) to the difficulties Great Britain has experienced with its withdrawal from the European Union. Another alternative is for New Jersey to establish a Fixed Resource Requirement Zone (FRR). This approach, which is provided for within PJM’s market rules, allows for one or more service areas in the state to withdraw from the wider PJM capacity market. This would enable the state to recover costs associated with the development of new renewable power generation through traditionally regulated rates and outside of PJM’s capacity market. Supporters claim that this model is the best way for New Jersey to meet its clean energy goals without withdrawing from PJM. Critics claim that the FRR approach would cost the state and its electricity customers between $32 million and $386.4 million more than PJM's 2021/2022 capacity auction.

New Jersey’s regulators will continue to solicit input from various stakeholders and market participants to find a solution where the state can pursue its clean energy goals while remaining within PJM.

5 Named Best Workplace in America Four Years in a Row