On behalf of the team at 5, I am pleased to forward our market letter for the first quarter of 2019. Before addressing this quarter’s topics, I would like to welcome the team at Simplified Energy and Luthin Associates to the 5 family. Simplified significantly expands our team in Houston, and Luthin Associates puts us on the map in a big way in the Mid-Atlantic region. We are all very excited to work with Catherine Luthin and her team in the East, and Dan McCarthy and his team in Houston.

The EPA introduced the Affordable Clean Energy Act in August 2018. This Act, which replaces the Obama administration’s Clean Power Plan, looks to individual states to develop emission reduction plans. With the Federal Government no longer driving a national carbon policy, states and local jurisdictions have filled the void. Numerous states have established renewable portfolio and zero emission standards. The widespread adoption of these regulations is important for several reasons. First, they impact the cost of electricity. More importantly, they threaten to undermine the competitive auctions that are the foundation of deregulated energy markets. In this letter we review this trend, discuss the court rulings that support continued state regulation of power markets, and touch on some of the ways that these regulatory changes impact our clients.

Not only has the current administration scaled back Federal efforts to regulate carbon emissions, the courts have taken a hands-off approach. Historically, the Federal Government regulated wholesale power markets and the individual states regulated retail sales of power. Until recently, the Federal courts limited state actions that interfered with the wholesale energy market. Most notably, in 2016, the Supreme Court invalidated out-of-market subsidies awarded by state governments to developers of new gas plants in Maryland and New Jersey on the grounds that such incentives “impermissibly intrude(s) upon the wholesale electricity market, a domain Congress reserved to FERC [the Federal government] alone.”1

However, on April 15, 2019, the US Supreme Court appears to have modified the position it took in 2016. The Court voted in Electric Power Supply Association v. Star not to consider appeals from lower court decisions in Illinois and New York that rejected challenges to the subsidies (Zero Emission Credits) that are designed to provide revenue to specific nuclear plants based on the fact that such plants did not receive sufficient revenue in competitive power auctions. The Supreme Court’s refusal to consider this case endorses recent judicial decisions that give states increasingly broad authority over energy markets and limit Federal oversight of wholesale markets. Emboldened by this ruling and with the support of the executive branch and the EPA, states can continue to implement policies with limited concern that such policies will be challenged in the courts.

Not surprisingly, certain states have accelerated their efforts to subsidize renewable
(wind and solar) and zero carbon (nuclear) generation. Some 100 bills to promote renewable energy are pending in varying states. In PJM, there are 13 different state policies that involve the regulation of carbon emissions. To date, three states (Hawaii, California, and New Mexico), the District of Columbia and Puerto Rico have passed legislation to move to 100% renewable electricity procurement.2 Washington, Massachusetts, New York, Illinois, Minnesota and Nevada 3 also have legislation pending to move to a 100% renewable standard. Proposals to increase renewable portfolio standards are pending in Maryland, Pennsylvania, Virginia, New Hampshire, and Arizona. The map at the top of the following page shows the spread of Renewable Portfolio Standards (RPS) throughout the United States. This map shows that nearly 75% of the states have some form of RPS in place. 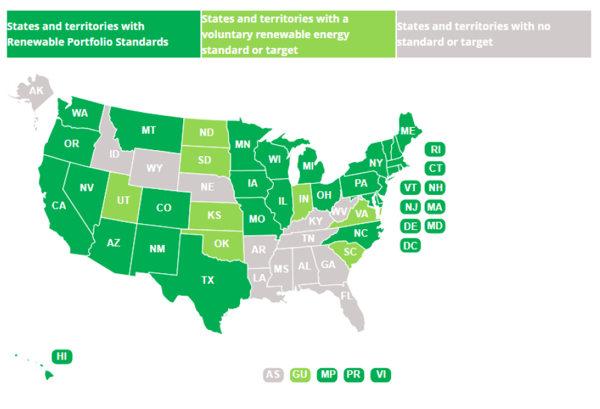 Concurrent with this trend, states are adopting ZECs, zero carbon emissions credits, to ensure the continued operation of uneconomic nuclear power plants. Illinois and New York approved ZEC payments in 2017 and New Jersey followed in May of last year. Pennsylvania, Ohio and Maryland also have ZEC regulations under consideration now.

The New Jersey regulations established a tariff of $0.004 per kWh to cover the cost of the ZECs, a subsidy of $300 million per year for 10 years, or $3B. The additional
$0.004 per kWh fee (or $4/MWh) will start showing up on customer bills in April or May of this year. This will amount to a $20,000 annual increase in electricity costs for a typical client that uses 5,000 MWhs per year. The additional $300 million in new revenue will go directly to three nuclear plants in New Jersey. At the last minute, the amount and need for this subsidy was challenged by the NJ Division of Rate Counsel and the PJM Independent Market Monitor. In response, the plant’s owner, PSEG, threatened to shut down the plants if the subsidies were not provided. New Jersey’s Board of Public Utilities (BPU) buckled under the pressure from PSEG and approved the subsidies. In making its decision to approve the subsidies, the BPU said that 40% of the state’s carbon-free energy comes from nuclear power and also cited the jobs that would be lost if the plants closed.

Exelon, PSEG and other nuclear owners have developed a playbook that works. This playbook consists of threatening job cuts from potential plant closures and pointing to the carbon-free emissions from the plants to keep uneconomic nuclear stations operating. The next battleground states are Pennsylvania and Ohio. In Pennsylvania, the targets are Three Mile Island and Beaver Valley. Draft legislation suggests that Pennsylvania may adopt a new tier of renewable power that includes “zero-carbon” resources. These subsidies could amount to $981 million per year. Exelon is threatening to begin shutdown procedures at Three Mile Island in June unless Pennsylvania provides subsidies to support the plant’s operations.

In Ohio, FirstEnergy is following Exelon’s playbook by threatening to shut down the Davis-Besse nuclear plant in 2020, and Perry in 2021. Republican lawmakers in the Ohio House introduced legislation in April to provide approximately $300 million in annual subsidies to Davis-Besse and Perry. This legislation would pay nuclear plants an additional $9.25/MWh for each MWh produced. This “subsidy” is a 30% premium over the current wholesale price of electricity. Based on what we have seen in New Jersey, Illinois and New York, we would not bet against the combination of low carbon emissions, jobs and the power of a utility to successfully lobby regulators at the state level in order to keep financially struggling nuclear power plants in operation.

Connecticut also took regulatory steps to insure the survival of Dominion’s Millstone nuclear plant. On March 15, 2019 Dominion announced that it would keep Millstone open, supported by a 10-year contract with the State of Connecticut. The amount that the state is paying to Millstone in excess of current wholesale market prices was not disclosed. Also in April, in the final hours of the Maryland 2019 legislative session, the House and Senate approved an amendment to the Clean Energy Jobs Act that required the state to consider if nuclear energy should be added to the states renewable portfolio standard.

Renewable regulation drives up the cost of electricity and creates budget uncertainty. Large energy users need to follow multiple state regulations to estimate future energy costs. At 5, we are spending more and more time advising clients on state regulations as well as new local regulations that address carbon emissions. New York City just adopted building regulations that require all buildings over 25,000 square feet to reduce emissions by 40% by 2030 and by 80% by 2050. Buildings that are unable to meet emissions targets will be subject to significant fines. It will be interesting to see if other local jurisdictions follow New York City and pass regulations to address carbon usage.
State regulators often pass renewable mandates without adequately considering how such regulations impact wholesale energy prices. In deregulated markets, the energy price is set by competition. Market operators (Regional Transmission Organizations) run auctions to set the price of electricity. In each of these markets, generators submit the price at which they are willing to sell power into the market, and the RTO selects generators based on lowest price – without considering fuel type.4 The diagram below shows a sample supply stack. 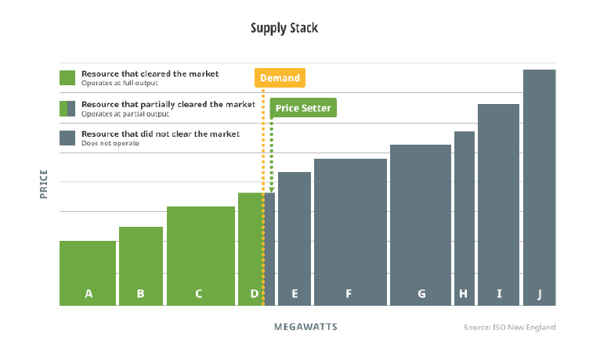 For a competitive market to work efficiently, the price paid to a generator should reflect the cost of building and operating a power plant. Government subsidies to promote renewable or carbon free (nuclear power) electricity provide renewable and nuclear plants with a competitive advantage over fossil fuel plants. These subsidies allow plants to bid at a price that is not directly related to their cost of producing electricity. The larger the subsidy, the more a subsidized generator can lower its price, displacing more efficient and lower cost power plants. Since decisions to invest capital in existing or to-be-developed generation plants are based on basic forces of market supply and demand, when the market structure no longer rewards the low cost generator, developers are no longer incentivized to find ways to lower the cost of electricity.

It will be difficult for many deregulated markets to establish bidding rules that incorporate so many different renewable mandates. As the map at the top of the following page demonstrates, PJM is a single energy market and RTO that comprises 13 states, the District of Columbia and includes 21 different utility companies.

How can PJM or any other RTO develop common rules for all market participants, if each state sets its own renewable or carbon emission standards? At a recent PJM meeting, Stu Bessler, who oversees market operations for PJM, acknowledged that it would be difficult to set up market rules if only some states set carbon emission targets.

The team at 5 has lived through multiple periods of market disruption. In almost every case, regulatory change and uncertainty results in unforeseen circumstances. On a macro level, our supply desk has been warning for some time about disproportionate amounts of renewable generation that is being developed across all markets. In light of these trends, we encourage our clients to continue to actively manage their exposure to energy market volatility.

Of course, please do not hesitate to contact me or other members of the 5 team if you would like more information on renewable purchase opportunities and/or if you would like to discuss other issues covered in this letter in more detail.

1 Without spending time on the legal analysis, the Supreme Court in Hughes v. Talen Energy Marketing rejected New Jersey’s and Maryland’s efforts to provide out of market subsidies to developers of natural gas plants who had been awarded power purchase contracts with the two states.
2 DC, 100% renewables for retail energy sales by 2032, Hawaii, 100% renewable energy in the electricity sector by 2045, California – 100% zero-emission energy by 2045, New Mexico – 100% percent carbon free electricity by 2045, Puerto Rico – 100% renewable energy by 2050.

Are Spring and Fall the Best Time to Buy Power?