Lubbock All Set for Electricity Deregulation

Why did Lubbock vote to deregulate the LP&L service territory?

Lubbock, Texas, the 11th most populous city in the state and birthplace of rock ‘n roll legend Buddy Holly, is becoming a deregulated electric territory. On February 22, 2022, the Lubbock City Council cast a unanimous vote in favor of electric deregulation, the final hurdle to transition Lubbock Power and Light (LP&L) to competitive retail electric service. LP&L hopes to fully transition service by mid to late 2023. Lubbock will now join over 7 million Texas electric consumers with the right to choose their own retail provider.

LP&L’s deregulation will go down in history as the first municipally-owned utility that voluntarily adopted a competitive retail structure since Texas Senate Bill 7 (SB 7) first became law in 1999. SB 7 aimed at using retail competition as a vehicle to lower electric rates across Texas and eliminate the monopolistic nature of electric utilities. The city of Lubbock has already begun the process, as LP&L connected 70% of customers to the ERCOT grid in May 2021. The remaining 30% are estimated to be connected by the summer of 2023. Once complete, Lubbock adds an additional 670 MW of load to the Oncor service territory. See Figure 1 for Lubbock’s transition timeline: 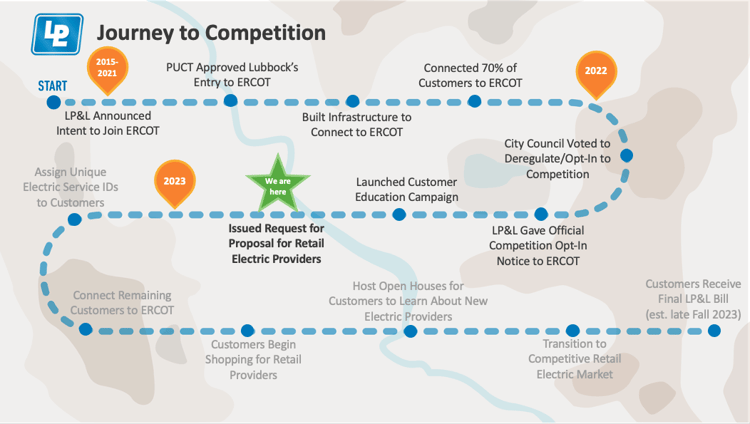 The cost was one of the many reasons Lubbock decided to take this step and join ERCOT. In a recent study by LP&L, the utility found that electric costs could drop an estimated $148.9 million annually for the city of Lubbock. Additionally, due to overall electric demand, if Lubbock remained disconnected from the ERCOT grid, the city would require a new power plant with an estimated cost of more than $700 million.

LP&L will continue to own and maintain all transmission and distribution infrastructure, in addition to being the sole provider of metering services. However, they will no longer bill customers for electricity. Instead, under the competition model, customers can shop multiple retail electric providers (REP) for plans, pricing, and contract terms, and the REPs will be responsible for billing once fully transitioned.

Is Lubbock pathing the way for other regulated territories in TX?

When SB 7 passed in 1999, deregulating the Lone Star state, 72 municipal power companies and 75 electric cooperatives were given the option to remain regulated. LP&L became the first of these companies to deregulate by choice. Policymakers reviewed the facts and determined that deregulation was the best path forward for their citizens. The city council's resolution states that "the City Council of the City of Lubbock believes that customer choice and retail electric competition will benefit the citizens of Lubbock and enhance growth and development in Lubbock."

In addition to reduced costs for consumers, a representative of LP&L also noted that by moving to a deregulated electricity market, the utility faced less risk from not having to supply power and exposure to spot prices in reference to the extreme volatility the ERCOT market faced during Winter Storm Uri. By connecting to ERCOT’s grid, LP&L can shift focus back to its delivery operations. Lubbock could be used as a positive example of the benefits of retail choice, leading other power companies and electric cooperatives to take similar steps towards deregulation.

5 is actively advising clients in the LP&L territory as they prepare for the procurement and operational opportunities ahead. Please reach out to your energy advisor from 5 or contact us to learn more about what clients are doing in that area as they transition to a competitive retail electricity market.