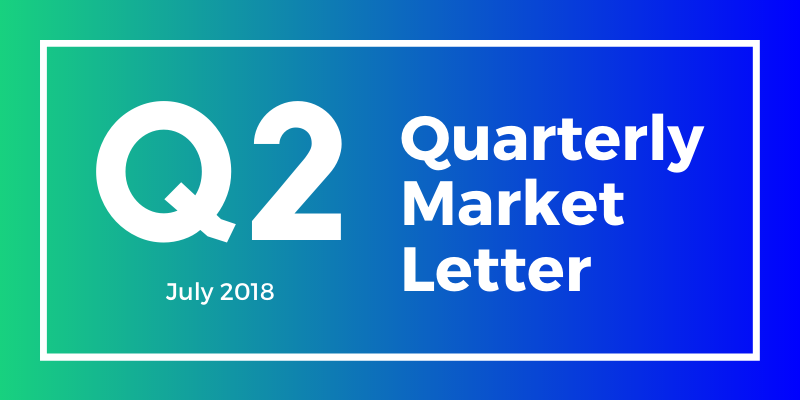 On behalf of the team at 5, I am pleased to forward our market letter for the second quarter of 2018. It was a record quarter for significant market and regulatory developments. To keep this letter a manageable length, we focus on three issues that are particularly important: (i) the New York Independent System Operator (NYISO) carbon tax proposal, (ii) various Federal efforts to effectively re-regulate competitive energy markets, and (iii) the 2020/2021 PJM capacity auction and what results say about the current chaos in the deregulated energy markets.

In June, the NYISO issued a five-year strategic plan. The plan surprised market participants by calling for, among other things, an accelerated introduction of carbon pricing. The NYISO intends to finalize the carbon plan in 2019 and to implement this plan in 2021 or 2022. Under the draft proposal, the NYISO will charge all electricity suppliers participating in the NYISO on a $/ton basis for all carbon emissions associated with electricity production. Load serving entities will pass such costs on to NY’s energy consumers. Current estimates are that the state would charge power plants $20-$40/ton for carbon emissions. A carbon tax at this level should increase a consumer’s electricity costs by approximately $20/MWh or $0.02/kWh. For a 2,000 MWh/year customer, such as a medium sized office building or a manufacturing facility, this change could mean an annual cost increase of $40,000.

Not surprisingly, the market reacted immediately. As the chart below shows, 2021 and 2022 prices quickly rose by $10 per MWh, suggesting that the market has put the odds on the carbon tax being implemented at 50%. 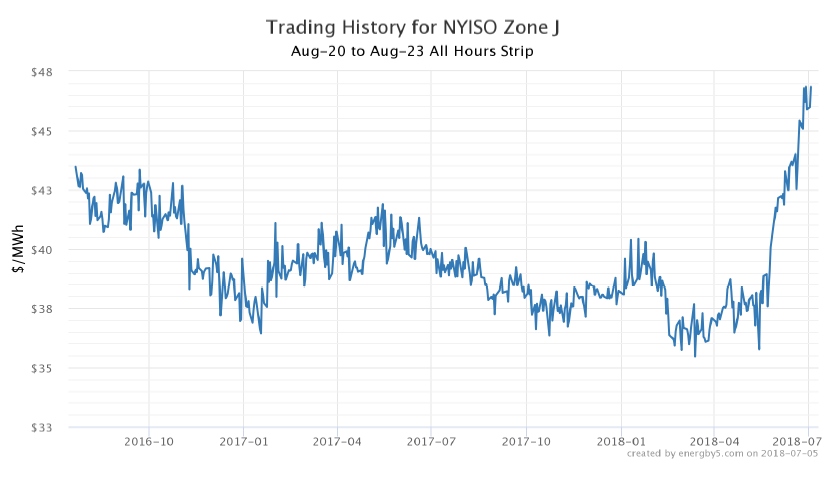 The correlation between regulatory change and market risk is not just important for our NYISO clients. In the last quarter, three parts of the federal government (the Executive branch, the Department of Energy and FERC) announced policies which, if implemented, will allow the Federal Government and each State to interfere more actively with the competitive energy market. Now more than ever, clients must incorporate regulatory risks into their energy procurement strategy.

Federal Efforts Part I - The President and the Department of Energy

As noted in Vol 6, Issues 3 and 4 of our Quarterly Letter, the Trump administration’s first effort to save coal plants was a Notice of Proposed Rulemaking (NOPR) from the Department of Energy (DOE). The DOE argued that the electricity grid’s reliability was at risk from the closing of coal and nuclear plants and called for a guaranteed rate of return for existing coal and nuclear plants with a 90-day supply of fuel. This plan was rejected by FERC’s five commissioners in a 5-0 vote on the grounds that the DOE’s NOPR would compensate generation plants regardless of a market demand for their output, a clear conflict with a free market.

Not to be deterred, on May 29, 2018 the DOE sent a 40-page memo 1 to the National Security Council calling for a 2-year halt to the retirement of certain generation facilities. The facilities are not named, but commentators expect that the list will include many of the large coal and nuclear plants that were the target of the NOPR. The memo leans heavily on issues of national security and the importance of defending our country from attack. The DOE notes that “resources that have a secure on-site fuel supply, including nuclear and coal-fired power plants, as well as oil-fired and dual-fuel units with adequate storage, are essential to support the Nation’s defense facilities, critical energy infrastructure, and other critical infrastructure.” The memo goes on to argue that our country’s natural gas pipeline system is a “major point of vulnerability” since it is difficult to protect. Environmentalists pointed out that if the DOE was really concerned about fuel supply, it should have focused on accelerating renewable plants and storage technologies, none of which require a firm fuel source. A few days after the memo’s release, the President ordered Energy Secretary Perry to take immediate steps to prevent the closure of additional coal and nuclear facilities. We are still waiting for Secretary Perry to act in response to the President’s order.

On June 29, 2018, in a 3-2 vote, FERC issued what may be the most significant regulatory announcement in many years. The ruling came in response to proposed adjustments to the PJM capacity market. Unlike in ERCOT, a market that allows the marginal price of electricity to incentivize the construction of new generation, PJM pays power plants and other sources of capacity (including demand response and energy efficiency) to be available to generate electricity. The energy market then provides additional revenue when the plants actually generate. Capacity auctions are run each year in May for a one year period that is three years into the future. For example, the auction held in May 2018, set capacity prices for the period from June 2021 to May 2022.

PJM (and other regulatory agencies) have been struggling with ways to address the increasing volume of subsidized generation that has entered the market. This includes renewable generation that receives tax benefits and incremental revenue in the form of renewable energy credits or RECs, and large nuclear generators that are being paid zero emission credits or ZECs (ZEC payments have passed in Illinois, New York and New Jersey). In addition, the declining cost of solar and wind generation means that the volume of subsidized renewable assets is becoming more and more material. Subsidies, in particular ZECs, are so high that generators that receive such payments can bid into the capacity market at lower prices, effectively depressing prices for other generators. PJM suggested several modifications to address these out of market subsidies. FERC rejected all of these proposals. Here is where it gets interesting: instead of just rejecting the PJM proposals and asking for PJM to respond to their concerns, FERC took the unusual step of initiating a hearing to discuss an alternative FERC-generated proposal.

FERC’s proposal allows states that want to subsidize generation to take these generating assets out of the market entirely and pay those generators a regulated rate of return on the assets. In this way, states can take a wide range of assets (coal, oil, wind, nuclear) that are the direct recipients of State or Federal subsidies out of the market altogether. If this rule is adopted, it could significantly undermine the basic principal of a competitive market – that supply and demand set the price of energy, not a regulator. If a large enough portion of the generation base is put back into rate base, the market could collapse.

PJM’s most recent capacity auction adds another layer of confusion to energy market. Auction results for 2021/2022 capacity were announced on May 23, 2018. The reserve margin for PJM (the amount of excess capacity) in 2021/2022 was 21.5%, almost 6% higher than the targeted reserve margin of 15.8%. PJM hit this reserve margin with a very limited amount of new base load generation. In fact, only one new combined cycle gas plant in Western Pennsylvania
(595MW Hill Top) cleared in this auction. Contrary to the concerns raised by the President and the DOE, the market has excess capacity and has very limited need for additional gas fired generation to meet future demand.

At the same time, there was a 4,400 MW increase in supply coming from customers who are able to reduce demand, 3,300 MW of this was Demand Response (DR) and 1,100 MW was from increased energy efficiency. This is reflected in the following chart: 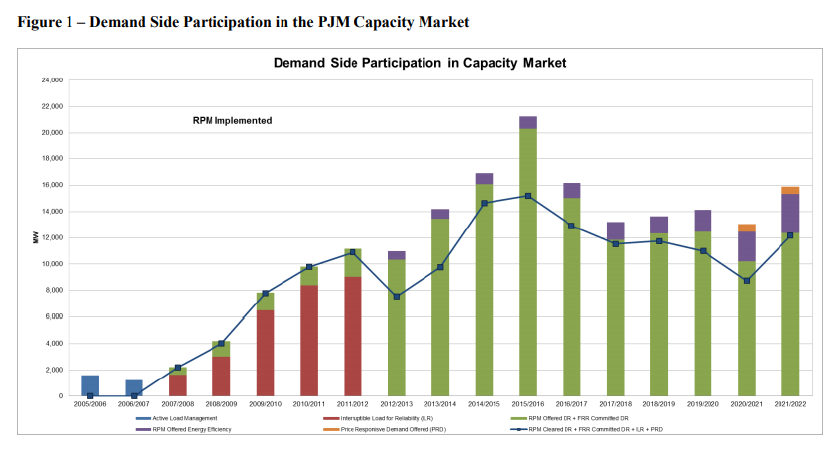 In recent auctions, the market’s supply of these resources had been reduced in response to stricter reliability rules. This trend has now changed as market participants have found new ways to offer DR and energy efficiency while meeting reliability targets. Renewable generation also continues to increase its market share in PJM. Wind powered generation increased by 529 MWs up to 1,417MWs (which represents an installed capacity of over 8,000 MWs), and solar from 125 MWs to 570 MWs (which represents approximately 1,600 MWs of installed plants). At the same time, existing nuclear power plants fared poorly. Approximately 7.4 GWs of nuclear capacity that cleared last year’s auction did not even clear this most recent auction.

The auction results make it particularly hard to understand FERC’s recent ruling and the DOE effort to mandate the continued operation of inefficient power plants. More aggressive carbon and other state environmental goals will only add to the confusion. And if that is not enough, a recent IRS ruling allows solar plant developers more time to build plants and still qualify for the 30% Investment Tax Credit.

For our clients, I think there are two important conclusions that can be drawn from the past quarter. First, it is increasingly important to be able to pro-actively manage load. As the PJM auction demonstrates, load reduction will continue to be a more and more important resource. Clients who can control consumption will be in the best position to manage market changes and leverage their ability to alter consumption to generate revenue. Second, procurement decisions need to factor in regulatory uncertainty. Clients that had long term hedges in place in New York are already seeing the benefit of this strategy. We would not be surprised to see the PJM and New England markets follow New York and rally in the face of continued regulatory uncertainty.

As always, please do not hesitate to contact me or another member of the 5 team if you have energy related questions or you would like to discuss the issues covered in this letter in more detail.

1 The memo was promptly leaked. The memo is in draft form and the header states that it is “Privileged & Confidential, Attorney-Client Privilege NOT FOR FURTHER DISTRIBUTION”.