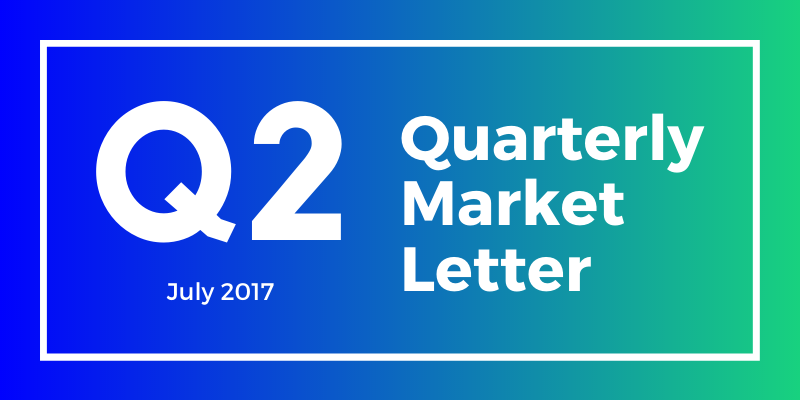 On behalf of the team at 5, I am pleased to forward our market letter for the second quarter of 2017. In our Q1 letter, we focused on how new technologies, particularly solar and wind generation, are transforming the power market and causing negative power prices in California. In this quarter’s letter, we focus on an old generation technology, nuclear power.

Low power prices, particularly prices that frequently swing up and down with variable levels of wind and solar generation, undercut the basic economics of nuclear generators. Nukes are expensive to operate and cannot easily adjust generation output. Faced with a growing number of nuclear plant closings, an unusual alliance joined together in passing legislation that established Zero Emission Credits (ZECs). ZECs are payments made in a dollar per MWh basis to specific nuclear plants to ensure that the plants do not retire for many years. Supporters of ZECs argue that the payments fairly compensate the plant owners for the plants’ environmental value, since nukes generate electricity without carbon emissions. These subsidies are not minor rate adjustments. In New York, ZECs increase consumer prices by over $3 per MWh, more than $500,000 per year for one of our larger clients.

ZEC advocates include environmentalists that embrace the carbon free quality of nuclear plants, politicians interested in preserving jobs and economic activity, and generation owners facing significant losses. In the 70s and 80s environmental groups opposed the construction of nuclear power plants in the US and overseas because of the risk that such plants posed to the planet. Today, many of these same groups support prolonging the operation of nuclear plants because of the risk that carbon dioxide poses to the planet. How did we get here?

While I was writing this letter, the following headline scrolled across the Bloomberg screen:

“Renewables Top Nukes in US Power Mix for First Time Since 1984.” 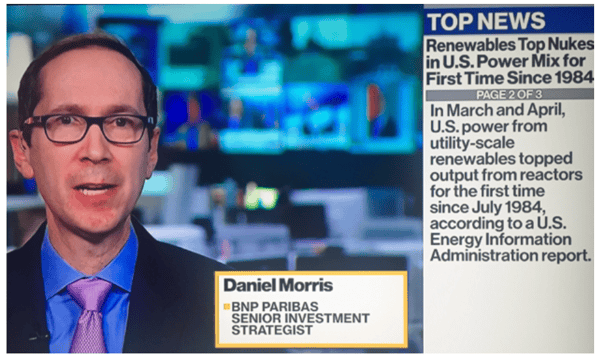 In March and April, utility scale renewable power plants generated more power in the US than existing nuclear reactors. The renewable generation share calculated includes hydro generation and the combination of high levels of precipitation in the West and the rapid growth of solar and wind all contributed to the shift. Between March of 2016 and March of 2017, wind generation increased by 16% and solar generation increased by a staggering 65%. At the same time, nuclear generation has been flat to declining. Low price natural gas and renewable resources have driven electricity prices to levels so low that many nuclear plants are unable to cover their variable operating costs. To date, more than 30 reactors have been retired. 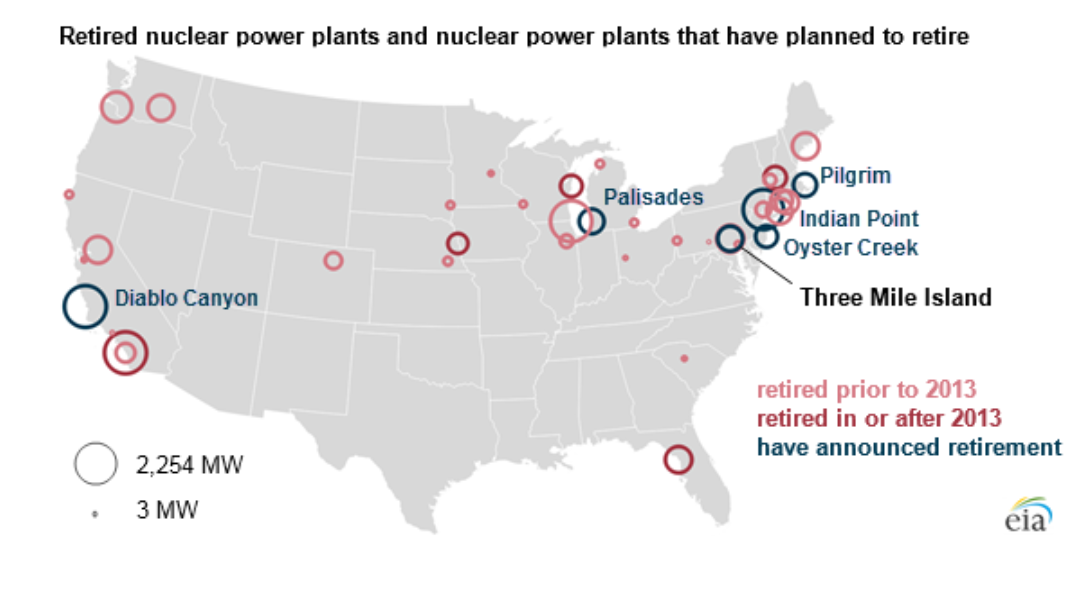 The economics of new build nuclear is even worse. In the last 10 years, only a single new nuclear plant opened in the US. TVA’s Watts Bar Unit 2 went online in October 2016. The four 1,250 MW reactors now being built by Westinghouse at two locations in Georgia and South Carolina are challenged by significant cost overruns and the bankruptcy of Westinghouse – the company that designed and is constructing the new reactors.

Unable to profitably operate, Exelon and other owners of nuclear power plants have leveraged the threat of closing plants, job losses, and climate change to support legislation which subsidizes nuclear generation at a level sufficient to permit profitable operation. The New York State Energy Plan calls for 50% of electricity to be generated by renewable power by 2030. ZEC supporters argue that if the nukes are closed, carbon emitting gas plants will be built to replace them, jeopardizing long term renewable goals. Leading environmental groups like EDF and NRDC have filed legal briefs in favor of the ZEC payments. While environmental groups may have reservations about nuclear power and its risks, they feel that the risk of climate change outweighs other concerns. 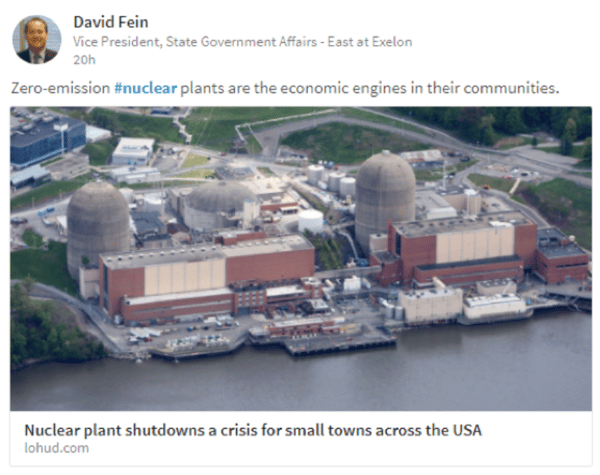 In both Illinois and New York, Exelon is now being paid a set amount of ZECs based on the MWhs of zero emission electricity they produce. The ZEC payments are modeled after the way states have paid renewable generators for renewable energy. This structure is important because of court rulings that suggest that a state can require the purchase of Renewable Energy Credits or RECs without such payments violating the Federal Power Act 1. The history of ZEC legislation in New York and Illinois is quite similar.

New York: In June 2016, Exelon told the New York State PSC that the company would shut down the Ginna and Nine Mile Point 1 reactors if ZEC legislation was not implemented. Similarly, the FitzPatrick plant, which was scheduled for closure, would be purchased by Exelon and kept in operation if, and only if, the ZEC legislation passed. This legislation guarantees payments to the three plants for the next 12 years at an estimated cost of $7.6 billion. Energy suppliers started to collect ZEC payments from retail customers in April 2017.

Illinois: In 2016, Exelon threatened to close two large Illinois nuclear plants, Clinton and Quad Cities, unless the Illinois legislature approved ZEC payments. In a May 2016 press release Exelon stated that (i) the two plants have lost $800 million over the past 6 years, (ii) the closure would cause the State 4,200 direct and secondary jobs, and (iii) $1.2 billion in economic activity. Illinois eventually passed a ZEC bill that will pay Exelon an estimated $235 million per year for the next 10 years. ZEC charges are now part of the distribution tariff in Illinois.

The success of this strategy in New York and Illinois may result in other states following suit. In Pennsylvania, Exelon announced that Three Mile Island will close in 2019 if Pennsylvania did not subsidize its output. Similarly, in Ohio, First Energy pushed House Bill 178 that would provide ZECs to the Davis-Besse and Perry plants. In May, the Ohio PUC suspended action on this proposal.

Non-nuclear generators and PJM (the independent market operator) have cried foul, arguing that such subsidies undermine the competitive market established in these regions. PJM argues that ZECs “will substantially harm the wholesale electricity markets that PJM operates, as well as the investors, competitive energy providers, and (ultimately) consumers that rely on PJM’s markets to provide adequate and reliable electricity at the lowest efficient price.”2 The ZECs allow thousands of MWs of nuclear power to run at market prices that are below their variable operational costs. For generation owners that do not qualify for ZECs (primarily coal and natural gas fired generators), the presence of more nuclear power reduces the wholesale price of power. These generators have filed lawsuits against the Illinois and New York regulations.

These lawsuits argue that the ZEC regulations violate the Federal Power Act. Extensive briefs have been filed and oral arguments have taken place in both cases. On July 14, 2017, the Illinois District Court granted the motion of Exelon and the state of Illinois and dismissed the claims made by the generators. This ruling is being appealed to the Seventh Circuit. As of the date of this letter, the New York court has not yet ruled on the matter.

In addition to artificially depressing the wholesale price of electricity, large ZEC payments undermine one of the key benefits of deregulation. In deregulated markets, the capital risk that goes with decisions to construct new generation facilities are borne by the owners of the plants, not by consumers. When energy markets were first deregulated, supporters of competition argued that market forces would (i) increase innovation, (ii) reduce prices, and most importantly, (iii) shift the risks of poor energy procurement decisions from utility ratepayers to companies that build and finance power plants. There are many examples of how competition has led to innovation and reduced prices – but it is easiest to demonstrate how deregulation has allowed ratepayers to avoid paying for poor decisions made around the construction of generation plants.

When energy deregulation was first debated, the Shoreham nuclear power plant was often used to demonstrate the importance of shifting risk to developers. Shoreham was built between 1973 and 1984 on New York’s Long Island Sound. Accidents at Three Mile Island (1979) and Chernobyl (1986) gave support to strong opposition to the plant. Construction was completed in 1984, however, opposition continued. Finally, in 1989, New York decided to decommission the plant. The cost of decommission alone was $186 million. The total cost of the ill-conceived plant to ratepayers in New York was $6 billion. Advocates of deregulated power markets argued that had the energy market been deregulated in the mid-1980s, the $6 billion cost would have been borne by the shareholders of the company that built the plant, Long Island Power Company, not the taxpayers of Long Island.

The amount of money lost on Shoreham pales in comparison to the amount of capital lost by owners and developers of natural gas and coal fired generation in the last twenty years. As the graph below demonstrates, there was a very large overbuild of natural gas plants in the early 2000s. The overbuild was compounded by demand destruction caused by the recession that began in 2008. 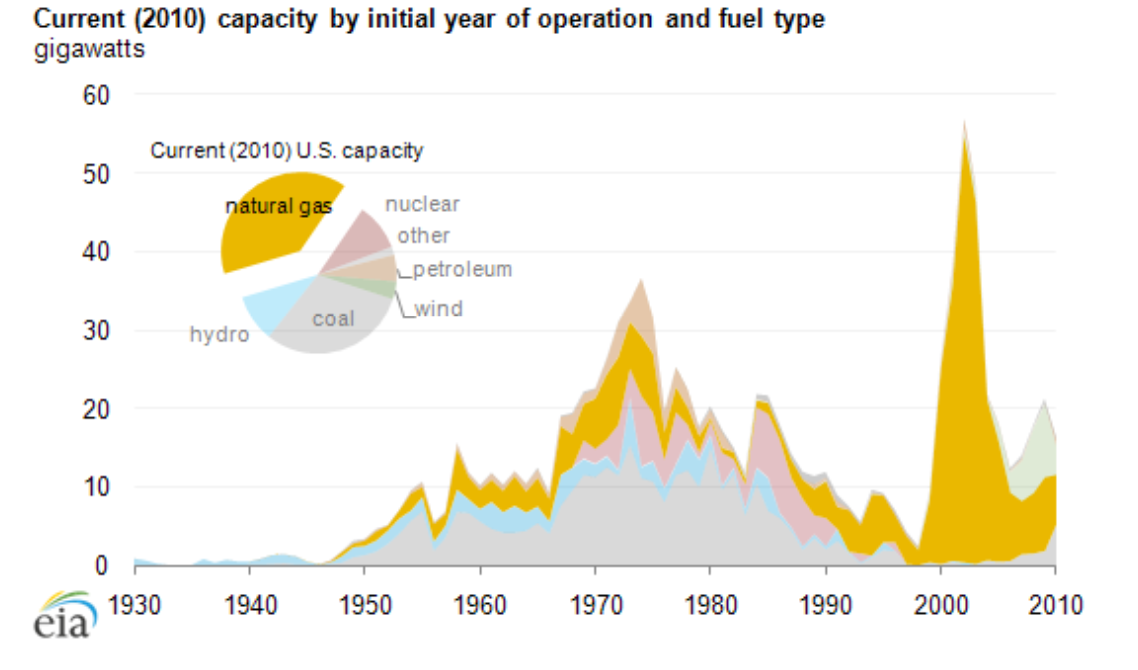 In deregulated markets, poor decisions made by these power plant developers did not impact consumers. The list of energy companies that have filed for bankruptcy since the beginning of deregulation is long and includes:

Unlike Shoreham, the cost of these bankruptcies were not passed on to consumers in deregulated markets.

The long term ZEC contracts in Illinois and New York shift the decision on where, when and what type of generation is built from the free market back to the regulators. If FERC and the courts uphold these new regulations, I expect we will see more generators using political power and the threat of job losses to avoid the closure of out of market generators. If this trend continues, it could threaten the successful operation of the competitive energy market.

In recent years, the Federal Government and FERC have strongly supported competitive electricity markets. For example, when Maryland and New Jersey tried to subsidize natural gas generation (as discussed in prior letters), PJM and FERC argued that such subsidies were in conflict with the Federal Government’s power to set wholesale electricity prices. In the Illinois ZEC case, FERC filed a letter explaining that it could not take a position in the case because there was only a single commissioner. FERC has not filed anything in the New York ZEC litigation. FERC is unable to act since it does not have a quorum – there is currently only a single sitting commissioner and a quorum requires at least three commissioners. The next few months should be an interesting time in the energy market.

What's Going on Behind the Curtain?