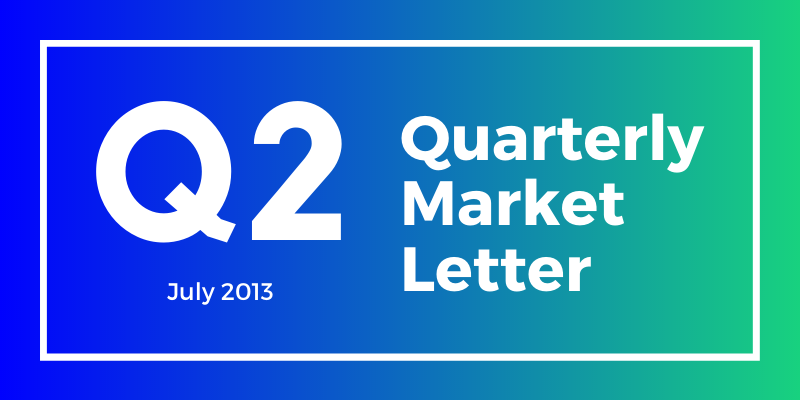 I am pleased to forward 5’s 2013 second quarter overview of the energy market. Like the prior letters, this note covers some notable trends and developments over the past quarter.

Let me start with a simple observation: it is a great time to be an energy consumer.Almost all other segments of the energy market are under pressure. Producers are pressured by an abundant supply of natural gas and oil driven by hydraulic fracking. Generation owners face difficult investment decisions. They manage power plants that struggle to turn a profit at today’s wholesale prices and face new challenges from demand response, renewables and environmental legislation. Retail suppliers continue to see increased competition and compressed margins.

The electricity and natural gas consumer holds many cards. Prices remain relatively low, suppliers are willing to modify standard contract terms to win business, and customers’ on site generation is an increasingly valuable resource. We do not expect the current market to remain this way for very long. Any number of market or regulatory changes could shift the balance of power back to energy producers or generators. A few examples include the institution of capacity markets 1 (now under consideration in Texas and, as of July 10, in California as well), accelerated retirement of coal and nuclear plants, new environmental legislation, extreme weather, and an over-dependence on natural gas to fuel power generation. Our general sentiment is unchanged, now is a great time for customers to aggressively explore all options that the market provides to manage electricity and natural gas costs.

The partners of 5 hold very different positions on the appropriate government reaction to climate change, but we all agree that the planet is warming. I am reminded of something I learned from Tim Treadwell, an environmental scientist at California’s Center for Sustainable Energy and former colleague to many at 5. Every time someone tried to assert that a particularly dramatic weather event (Hurricanes Rita and Katrina a few years back, more recently Sandy or the record temperatures in Alaska and Nevada just now) was the result of “global warming”, Tim told us that there was simply no scientific evidence for such a cause and effect. But what Tim would say was that with higher global temperatures we would see increased volatility in weather patterns. Tim’s forecast has held up, and we all support the simple proposition that a hotter globe will see increased volatility in weather patterns. Record setting heat in the South and Northwest, unusually active and tragic forest fire seasons in the Southwest, and unprecedented rains in the East all support Tim’s predictions. For energy consumers, this means that you can expect more volatility in energy prices driven by weather events.

On June 25, 2013, in an address at Georgetown University on climate change, President Obama announced his plan to regulate carbon pollution from power plants. Specifically, the administration called for greenhouse gas (GHG) emission standards for future power plants no later than September 2013, and new rules for existing power plants no later than June 2014. Notwithstanding the Supreme Court’s finding in 2007 that the EPA can regulate GHG emissions as a pollutant under the Clean Air Act, implementation of the administration’s plan is uncertain and subject to significant regulatory and legal challenges. In spite of these challenges, the proposed carbon regulations will create additional uncertainty for owners of aging coal generation and should accelerate retirements. Decisions on the lifespan of these plants are being made every month. This month, First Energy announced plans to deactivate two coal fired power plants located in Pennsylvania by October 2013. The total capacity of these plants is 2,080 MWs. The decision was “based on the cost of compliance with current and future environmental regulations in conjunction with the continued low market price for electricity.” AES made a similar announcement in May with respect to 620 MWs of coal plants in the Midwest. We expect to see continued acceleration of coal retirements in the near future. These retirements may result in additional energy price volatility.

The Continued Shift to Natural Gas

The second quarter saw a continuation of the dramatic shift in our nation’s energy infrastructure. As noted by the US Energy Information Administration in its Energy Outlook 2013, fundamental changes in the energy economy include four important trends, all a result of the low price of natural gas. These are (i) the increased use of gas in electricity production, (ii) higher US based industrial production, (iii) an acceleration in the switching of heavy vehicles to burn natural gas, and (iv) expanded efforts to export LNG. 2 In the Midwest and Northeast (the PJM system), an annual capacity auction is held to determine the amount of generating resources available to serve electricity demand. Results in the most recent PJM capacity auction confirm the increasingly rapid move to gas fired generation. Lower capacity prices set in the most recent auction were driven by “a record setting combination of new generation [gas fired], uprates, imports and energy efficiency” and a continuing trend of “a significant decline in the amount of coal-fired generation cleared...”.

Coal is not the only base load power source being left behind by the natural gas revolution. Nuclear power is moving down the same path to obsolescence. In President Obama’s speech he made a small nod to new nuclear, mentioning that we are building the first new nukes in three decades in Georgia and South Carolina. What he failed to mention is that a large number of existing nuclear plants are under pressure and being shut down. Just a few years ago the French energy giant, EDF, announced a large investment in Constellation’s nuclear fleet, and a JV to develop new nuclear plants in the US. Today, the JV has collapsed; low natural gas prices (and the disaster in Fukushima) ended the US nuclear revolution before it could begin. We see this trend continuing and accelerating.

The natural gas revolution is destroying coal and nuclear generation; at the same time it is creating new markets and new opportunities for distributed generation. Historically, on site gas generation was only used as an expensive “emergency” source of back up supply. Today, developers are looking at various opportunities, one of the most exciting of which is Combined Heat and Power (CHP)3 projects. These distributed generation projects, particularly in coastal states like New Jersey, are seen as a way of reducing the grid’s susceptibility to weather events. Large commercial and industrial customers should monitor developments in the distributed generation market and evaluate on site generation options as rules and incentives for CHP projects are established.

For smaller commercial customers, on-site solar is an increasingly viable way to hedge exposure to gas driven energy prices. The improving economics of on-site solar result from three factors, (i) a continued excess supply of solar panels due to the recession in Europe and increased production from China, (ii) federal tax incentives that currently offset almost 50% of a solar project’s cost, and (iii) the ability to offset all per kWh distribution and transmission charges. Even without any State incentives, solar projects can generate electricity at very competitive prices. Markets remain very volatile and customers that have a load profile and site layout that favors on site solar need to move quickly when conditions are right. In Massachusetts, the Government was shocked to find out how fast a market will respond to strong incentives. The State set an objective of 250 MW of solar by 2017; this quarter projects with over 550 MWs of projected supply applied for incentives, four years ahead of the State’s goal. The interest was so strong that the State decided to expand its solar goal to 1,600 MWs by 2020.

Change On the Horizon – Merchants are Back

For the first time in many years, merchant power plants (plants that are built to sell power in deregulated energy markets and do not have a guaranteed source of revenue) are being financed and are under construction. In April, Panda Power Funds announced the financing of a 758 MW expansion of the Temple Power Plant. Together with other projects in Texas, Panda now has 2,250 MWs of new gas fired capacity under construction in Texas alone. Institutional Investor also reported that Panda is raising between $800 million to $1 billion of new funds to develop three generation projects in the Northeast. We are seeing similar progress on several other merchant plants in the East including Moxie Energy’s 850 MW Liberty Plant in PA, Genesis Power’s 750 MW Keys Energy Center in MD, and EmberClear Corp 300 MW gas plant in PA. While new generation could dampen capacity shortages, we think it is more likely that the successful development of these new projects will result in faster retirements of coal and nuclear projects and create increased upward pressure on electricity prices.

Our overall approach to managing risk has not changed. We strongly feel that most customers should leverage the current beneficial market conditions and pro-actively explore ways to hedge their exposure to the potential of rising electricity and natural gas prices. Of course, please do not hesitate to contact me or anyone at 5 if you would like to discuss the issues raised in this letter, or if you have specific questions about your energy management strategy.

1 Capacity is an additional revenue stream paid to owners of energy generation plants and other energy resources (such as demand response) for being available to generate electricity. Capacity revenue is designed to incentivize construction of new generation. Capacity markets currently exist in most deregulated markets (although not in Texas or California). The cost of capacity payments are borne by energy consumers.
2 LNG is natural gas that has been converted to a liquid form for transportation. In May 2013, the Department of Energy ended a nearly two year moratorium on LNG export approvals when it approved the export of LNG to countries that do not have a free trade agreement with US. The order specifically addressed the proposed expansion of the Freeport LNG plant, an $11 billion project that is scheduled to ship 2.1 bcf of gas a day in six years. Customers of the project include BP, Osaka Gas Co. and Chubu Electric Power Co.
3 These projects, which produce two forms of energy from a single fuel, such as electricity and steam, were responsible for the first boom in independent energy projects following the energy crises of the late 70s.

Hitting A Home Run With An Energy Audit

Power Storage In Your Building