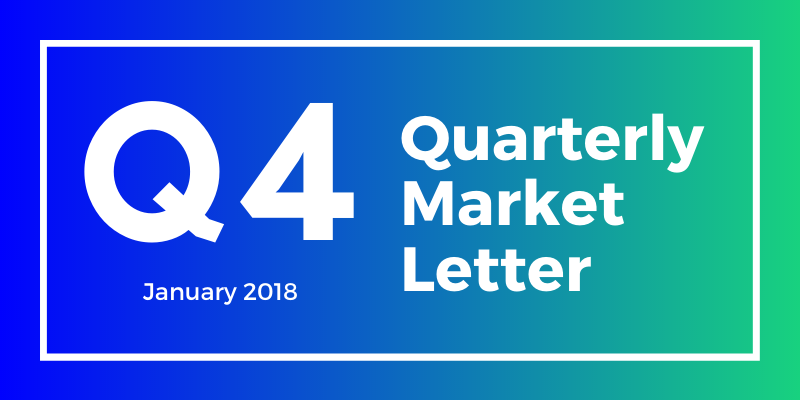 On behalf of the team at 5, I am pleased to forward our market letter for the final quarter of 2017. I began our last quarter’s letter with a discussion of the correlation between extreme weather and energy prices. I noted that since the extreme cold in the Northeast in 2013/2014, and the extreme heat in Texas in 2011, the energy market had not been tested to see how it would respond to extreme weather. Consider the market tested: the chart below tells the story. 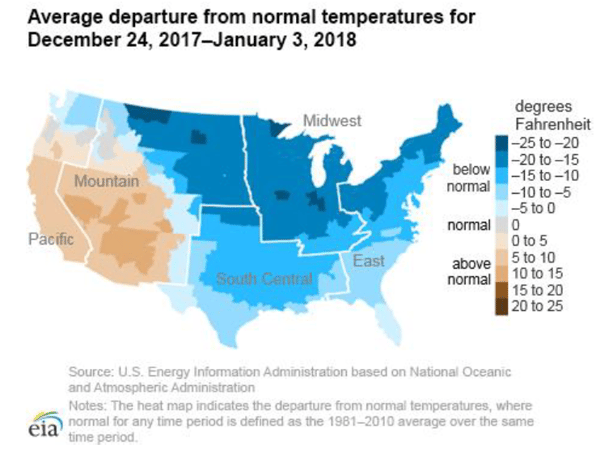 This test was particularly timely in the context of the ongoing debate in Washington regarding grid resiliency. As noted in our last issue, in September, Energy Secretary Perry filed for regulatory changes arguing that emergency action is needed to insure the reliability of power supply. In his filings, Secretary Perry and the Department of Energy (DOE) used the 2014 Polar Vortex and the failure of natural gas plants to perform during that period of cold weather to support their demand that independent operators (for example, ERCOT and PJM) provide “cost of service” compensation for certain coal and nuclear power plants with 90 days of onsite fuel. FERC agreed to rule on Secretary Perry’s request by January 10, 2018.

With FERC watching and just days before their ruling, we saw some of the coldest temperatures on record. But contrary to DOE’s concerns, we did not see a repeat of the outages that plagued various electricity markets in 2014. Market reforms introduced to increase reliability after the 2014 Polar Vortex appear to have worked exactly as planned. During the cold spell, there was a dramatic reduction in the market’s reliance on natural gas. Various programs introduced by market regulators after the 2014 Polar Vortex insured that a large portion of generation in the Northeast was able to run on oil as well as natural gas. When natural gas supplies became tight and very expensive, dual fuel generators ran on fuel oil. As you can see from the chart below from the New England ISO, oil was the predominant fuel used for power generation on January 5th. The next chart shows the fuel mix on the same day in 2017. On that day, with milder temperatures, natural gas was the main source of electricity. The switch to oil fired generation occurred in New York State as well.

In New York, the ISO stated that “Almost 50% of the generation fleet is able to rely on oil as a backup.” For example, at 6:25pm on January 3rd, dual fuel units generated 7,209 MWs, while natural gas units only generated 3,364 MWs. Like New England and the Mid-Atlantic states, New York survived the 2018 Polar Vortex without any significant reliability issues.

The 2018 Polar Vortex: The Market Impact

The rally in spot electricity prices in PJM in 2018 was not nearly as significant: 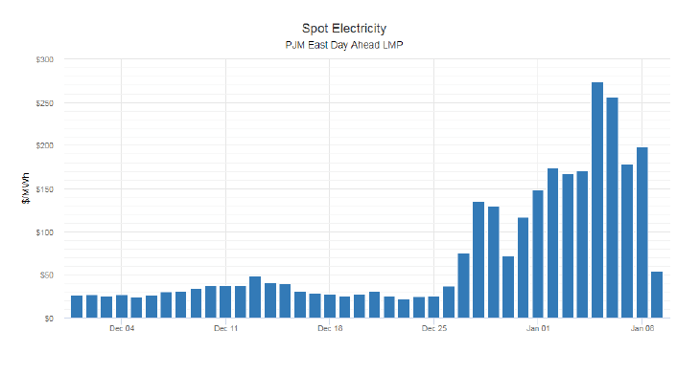 While it is still early in the winter, initial indications are that generators’ ability to run on oil also limited the increase in spot prices. If generators had to purchase natural gas on the spot market to run, the spot electricity price would have been much higher. For example, a generator that is paying over $100 MMbtu for natural gas will have to charge ~$1,000 MWh just to recover its fuel cost. This happened during the 2014 Polar Vortex, but because of the increase in dual fired units, generators switched to oil when natural gas prices soared during the recent cold snap.

FERC Responds to the Department of Energy

As the temperatures moderated, FERC issued its rulemaking in response to Secretary Perry and the DOE. It looks almost like the commissioners were waiting to see how the market responded to the cold weather. In a unanimous vote, the 5 commissioners (4 of whom were appointed by President Trump) terminated the proceeding. The ruling was a total rejection of DOE’s three part rationale for cost recovery: (i) the accelerated retirement of baseload coal and nuclear plants, (ii) the 2014 Polar Vortex and the weakness of the grid’s response to extended periods of cold weather, and (iii) a concern that reliability is not adequately compensated by competitive markets.

5 and all supporters of competitive energy markets breathed a big sigh of relief. The Department of Energy’s argument was particularly dangerous to a competitive market for electricity. DOE had argued that the market was flawed and that in order for coal and nuclear plants to compete with cheaper gas and renewables, regulators should guarantee them a recovery of their cost. This kind of rate of return compensation is antithetical to a functioning competitive market. In its ruling, FERC determined that the DOE and proponents of coal and nuclear generation had failed to show that (i) current market rules were unjust and (ii) that any “past or planned generator retirements… maybe a threat to grid resilience.” In a further finding that supports competitive markets, FERC stated that “the [NOPR] would allow all eligible resources to receive a cost-of-service rate regardless of need or cost to the system. The record, however, does not demonstrate that such an outcome would be just and reasonable.” In a nod to DOE’s concerns, FERC initiated a new proceeding to explore resilience issues in the RTOs/ISOs. We will continue to follow this new proceeding in the months ahead.

Regardless of FERC’s ruling, consumers should still pay close attention to the accelerated retirement of baseload plants. On October 6, 2017, Luminant announced its decision to close the 1,800 MW Monticello coal plant in Titus County, Texas. This was followed by the October 13 decision to close two other power plants, Sandow Power Plant in Milam County and the Big Brown Power Plant in Freestone County. These added another 2,300 MWs of base load generation to be retired in early 2018. The three plant closures amount to 12 percent of the Texas’ coal fired generation capacity. The market’s reaction was immediate. Summer peak prices for 2018 moved up immediately as reflected in the following chart: 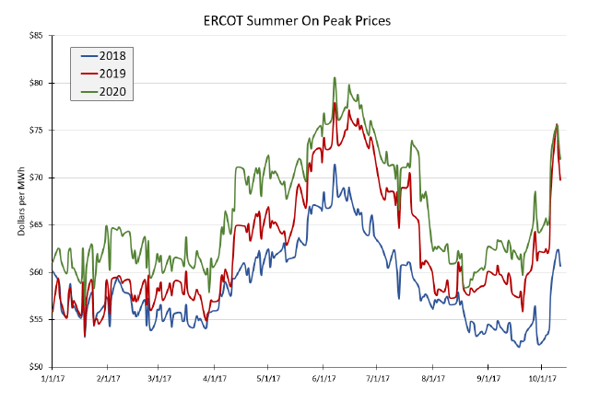 The speed with which the market responded to this announcement confirms what we have been saying for some time. At current low energy prices, even a relatively minor change in the energy stack can have a very material impact on forward prices. ERCOT enters 2018 facing renewed concerns about the sufficiency of its generation fleet. The retirement of these plants reduced ERCOT’s reserve margin to 9.3%. Beth Garza, director of ERCOT’s Independent Market Monitor, stated that ERCOT is coming into the summer of 2018 with some of the tightest reserve margins since 2007. At the same time, ERCOT continues to see more and more wind and solar projects enter the market. Approximately 29 GW of wind and almost 25 GW of solar projects are currently going through some part of the interconnection process.

We continue to believe that ERCOT’s energy only market is the best model for a competitive market, and we expect new supply and increased levels of distributed generation to adequately address potential shortages. However, reserve margins are low in the summer of 2018. If we have a particularly hot summer, ERCOT may have to look to Mexico for imports or for customers to reduce load. If demand exceeds supply, we could see prices trade up to the ERCOT cap of $9 kWh, which equals $9,000 MWh. If summer prices rise to these levels, we could also see a significant jump in the forward price of electricity as well. Accordingly, we are strongly recommending that our ERCOT clients avoid significant open positions over the next few years.

Factoid: Exploring the Possibility of Solar Energy From the Moon