Get to Know Cady Thomas

Cady Thomas was 5’s first employee and is celebrating her eight-year anniversary this month. Today, she is a member of 5’s Executive Leadership team and serves as the company’s Pit Boss. The following is her interview with the 5 By 5 Editor-in-Chief, Steve Kass.

SK: What exactly is a “Pit Boss”? That’s an odd title.

CT: Laughs. That title comes from a couple of different places. At First Choice Power, which is where I worked before 5, we had something called the “sales pit” which was the hub around which all sales activity happened. When we started 5, our goal was to set up a similar team that coordinated all sales and sales support activities. We took that concept of the “sales pit” and brought it to 5. The idea of a Pit Boss also comes from NASCAR and Vegas. In both cases, there are many things happening, quickly, that involve different team members. There has to be a person responsible for ensuring that the team works together, the wheels don’t fall off and things run smoothly. That’s what I do.

SK: How did you get started in the energy industry?

CT: My first job out of college was in accounting and I hated it. I really wanted to find a job where I didn’t dread going to work every day. I applied for a sales support role at First Choice Power and was ultimately hired after a series of very intense interviews. I really thought I bombed those interviews, but, to my surprise, I got the job. I really loved the fast-paced nature of the work and the fact that there was nothing repetitive or boring about what I did. Each day I was doing something different. I also liked the flat organizational structure. I was working in an entry-level position and yet the senior leaders and executives at First Choice were open to my ideas and interested in what I had to say. That’s where I met Brian Hayduk, Josh Coleman, Eric Plateis and Jeff Schiefelbein, who are four of the founding Partners of 5.

SK: You were actually the first employee hired at 5. What was that like?

CT: It was weird. In the very beginning, it was me and four of the five Partners crammed into a small home office. But above all, I was shocked and honored that Brian, Josh, Eric and Jeff would pick me, out of everyone else they knew, to be the one who helped them to get this business off the ground. It was a whirlwind of activity in those first few months where we were trying to figure things out and get things done. It was also an atmosphere of collaboration where we would all bounce ideas off each other to try and find different and better ways of helping people. Our goal was, and still is, to get in front of as many people as possible and to disrupt an industry.

CT: The energy industry is complicated and continuously changing. I think there is a tremendous need to take what is complex and make it accessible in a way that matters to clients. I’ve also seen too many instances where clients have been taken advantage of and given bad advice by non-reputable people in this space. We want to change that. We think people deserve better energy advice. And I think we are successful in doing that. But this is a marathon and not a sprint as we build our business and gradually change things one client at a time.

SK: Tell me about some of the famous and talented people in your family.

CT: Well, my grandmother on my Dad’s side of the family won the Miss America pageant in 1947. She only entered the competition to earn money for college and was stunned when she actually won. Her name was Barbara Jo Walker and she has the distinction of being the last Miss America to be crowned in her bathing suit. She was also the last Miss America to be married during her one-year reign. My Dad, Andy Hummel, was the bass player and founder of the band Big Star. They were popular in the 1970s but never had a ton of commercial success. Today, they are perhaps best known for the theme song to “That 70s Show.” While my Dad played bass in the band, he could also play the piano, mandolin and guitar – he was an extremely talented musician. Even though he went on to have a successful career as an engineer for General Dynamics, music was always his first love.

SK: And your family is continuing to grow, isn’t it? 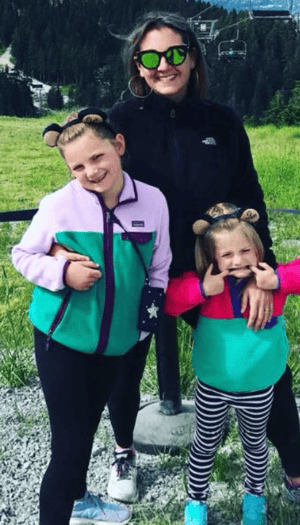 CT: Yes! My husband Tanner and I have two daughters. Eleanor will be 10 this year and Caroline is 5. Tanner and my daughters are the loves of my life and are all constant lessons for me in patience and grace. We are also very blessed as we are expecting our first son to be born in five months. I pray that he will inherit his father’s kindness and big heart. But it will be a good thing if he doesn’t share Tanner’s love for the band Nickelback.

SK: This month is your eight-year anniversary with 5. What advice would you go back and give to yourself eight years ago?

CT: I would go back and remind myself, as I mentioned before, that this is a marathon and not a sprint. Our goal of changing an industry is lofty and it is only going to happen through baby steps. And it is not as daunting as it seems when you realize that this kind of change happens gradually in the way you interact with others and treat them on a daily basis.

SK: You are stranded on a desert island. What books and music do you bring with you?

CT: I love to read and I wish I had more time to read it but if I am stranded on an island, I would bring “Matilda” by Ron Dahl and Elton John’s entire musical catalog to listen to.

SK: What actress stars in an a movie about your life and what is the name of that movie?

CT: It would have to be Emma Stone and the title of the movie would be, “Everything will be OK in the end, if it’s not OK, it’s not the end.”

Connect with Cady on LinkedIn.