Have you ever believed the energy market myth that natural gas prices are always cheaper during the fall and spring?

On September 15, 2021, the prompt month NYMEX contract traded intraday as high as $5.65/Dth and closed at $5.46/Dth. At the beginning of June, that same contract was trading near $3.00/Dth. Except for the five down trading days between September 16th and September 23rd, a correction driven by a bullish storage report, the market has been in a steady rally since last August as shown in Figure 1. 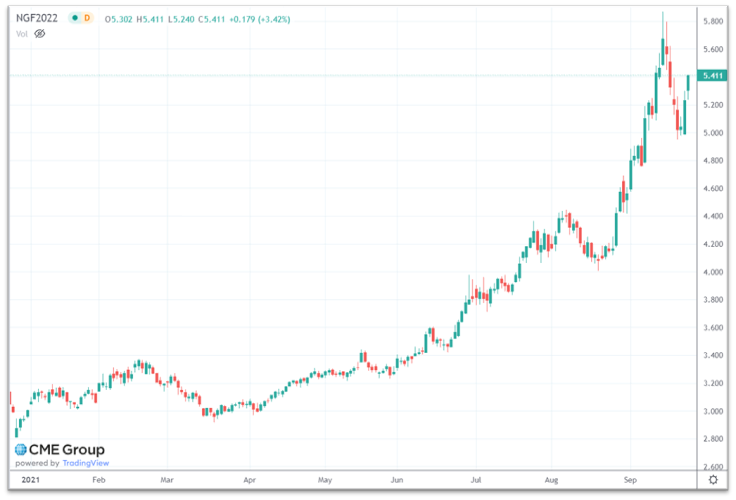 Most consumers do not realize that domestic natural gas prices are affected by the overseas demand for natural gas. Figure 2 shows prompt month gas prices for the Japan/Korea Market (JKM), the largest LNG trading hub in Asia. Note the similarities between this chart and domestic prompt month prices in Figure 1. Not only are the prices curves almost identical, but the daily corrections and changes in direction are also highly correlated.

European natural gas prices are following a similar pattern. The large European LNG trading hub, the Dutch Title Transfer Facility (TTF) in Figure 3, has also experienced a sustained rally since the beginning of 2021. The JKM and TTF price curves are also highly correlated to one another, with both markets trading at record highs. 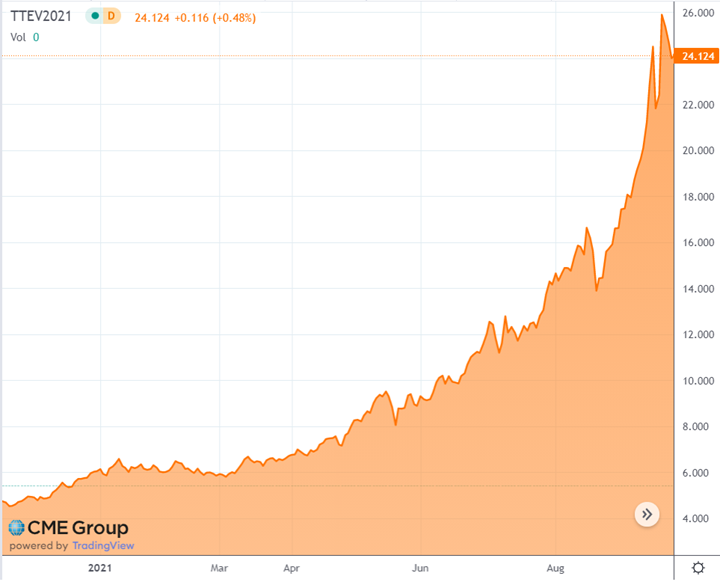 The large drivers of the price spikes in Europe and Asia are very familiar for US traders. Overseas gas markets are dealing with low natural gas storage levels in Europe and Russia, where this past week the International Energy Agency asked Russia’s Gazprom (a state-owned energy company) to increase gas deliveries to Europe to help combat soaring gas prices. To say that political pressures are present in these conversations would be an understatement.

In China and Asia, some energy-intensive industries, like producers of fertilizer, cement, and aluminum, are being curtailed due to the energy shortage, while others have started to switch to alternative fuels such as fuel oil, crude, or coal.

Domestically, there has not been any significant growth in natural gas storage levels since the end of the traditional injection season just a few months ago as the difference between the five-year average and current storage levels has been constant since July. The EIA’s larger-than-expected injection into storage, reported on September 16, 2021, was the 2nd largest injection for that week in the past five years, which was likely was the main driver in the five-day sell-off that week as shown in Figure 1. This also correlates to the $2.00/Dth drop in global LNG prices on that same day, which quickly corrected two days later.

One thing is certain, the large spread between natural gas prices at the Henry Hub in Louisiana, which is near many US LNG export terminals, and LNG prices abroad have brought renewed attention to expanding domestic LNG export capacity. International buyers that would like to mitigate their risks to future LNG spot price rallies are likely to increase conversations around locking in future capacity with long-term tolling agreements with additional US LNG terminals.

When looking at the fundamentals of domestic natural gas trading to determine how prices might move, which traditionally have included winter weather forecasts or rig counts in the Marcellus or Haynesville shales, we might also need to start evaluating international gas demand as well. It could be that global natural gas fundamentals and geopolitics are having a greater impact on US natural gas prices than many anticipated. While it is too early to tell if foreign gas markets will create another black swan event this year, it is certainly in the realm of possibilities. A harsh winter, in the US, Europe or Asia, could send prices soaring even higher than they are today. Prudent natural gas buyers should be prepared to expect the unexpected.