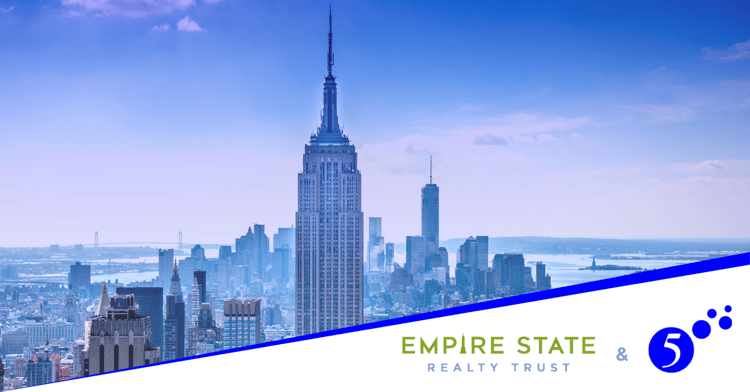 “ESRT is the leader in sustainable operations with a viable example of how to scale carbon neutral technologies, strategies and policies to balance with an effective economic business case,” said Dana Robbins Schneider, SVP, director of energy, sustainability & ESG at Empire State Realty Trust. “We have purchased renewable power from Green Mountain Energy for the World’s Most Famous Building, the Empire State Building, for a decade. We now expand that to all properties in New York State with an additional Direct Energy contract for our Connecticut properties. We continue to advance our commitment to solutions that reduce our environmental impact. Our tenants now work in carbon neutral offices and the investment community can recognize our leadership.”

100% of ESRT’s more than 10.1 million square-foot portfolio is now powered by renewable wind energy. This three-year expansion will purchase more than 300 million kilowatt hours (kWh) of renewable energy and avoid the production of 450 million pounds of carbon dioxide. Comparable equivalent measures would require:

- Every New York State household to turn off all their lights for a month; or
- Removal of all New York City taxis for one year; or
- The addition of two Central Parks to New York City

“At Green Mountain, we’re encouraged by the sustained and vocal advocacy from Empire State Realty Trust that continues to lead New York’s transition to renewable energy,” said Mark Parsons, vice president and general manager of Green Mountain Energy. “As the longest-serving competitive green energy provider, our mission is to use the power of consumer choice to change the way power is made, and we are committed to helping New Yorkers reduce their carbon footprint.”

Green Mountain Energy was awarded the electricity contract after a bid process that involved multiple electricity providers and was facilitated by 5, an award-winning energy advisory firm that serves clients throughout North America. 5 and Green Mountain worked together to create a custom rate structure for ESRT’s New York properties that leveraged favorable market conditions for both energy and capacity, and which is expected to result in more than $800,000 in savings to ESRT for the first year of the contract.

“We were excited to advise ESRT on the electricity procurement strategy for the Empire State Building,” remarked Taylor Duncan, vice president of 5. “As our team continued to help ESRT, we were able to expand our impact to include powering the entire ESRT portfolio throughout New York and Connecticut with renewable wind electricity.”

ESRT’s Empire State Building was one of the first Green Power Partners to be recognized by the U.S. Environmental Protection Agency for its use of green power as an effective way to reduce the environmental impacts of electricity consumption. The iconic landmark also underwent a groundbreaking energy and efficiency retrofit, which began over 10 years ago as part of the $550 million Empire State ReBuilding restoration program and has already delivered a 40% reduction in energy use and emissions.

“We are happy to serve as a groundbreaker in sustainability,” said Robbins Schneider.

Empire State Realty Trust recently earned the highest possible GRESB 5 Star Rating, widely recognized as the most rigorous standard for the sustainability performance of real estate companies and their funds. The company’s portfolio was also the first in the U.S. to achieve the WELL Health-Safety Rating, an evidence-based, third-party verified rating focused on operational policies, maintenance protocols, emergency plans, and stakeholder education to address a COVID-19 environment now and broader health and safety-related issues into the future. ESRT was additionally named a Fitwel Champion from the rigorous third-party healthy building certification created as a joint initiative between the U.S. Centers for Disease Control and Prevention (CDC) and the General Services Administration (GSA), with 83% of its NYC portfolio certified.

Cuomo's State of the State for Energy