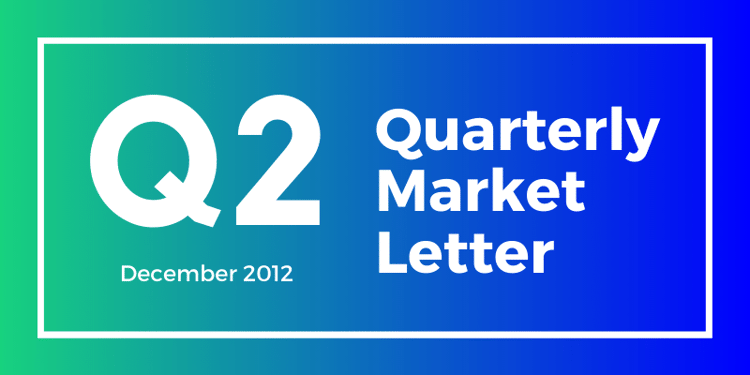 I am pleased to forward 5’s second quarterly overview of the energy market. As with our first letter, we cover notable trends and developments in the market over the past few months. We hope that these quarterly reports serve as a natural complement to our weekly market reports (which focus on energy prices), as well as the specific client-based recommendations issued by our advisors.

In our last report, we suggested that an evolving consensus on climate change may put additional focus on retiring existing coal plants, push for greater use of natural gas, and create additional upward pressure on energy prices. It may be bad science to link Superstorm Sandy directly to climate change, but there is little doubt that the storm and the record sea levels seen in New Jersey and New York will provide significant support for those pushing for greater regulation of greenhouse gases. The combination of Obama’s re-election and the devastating storm should further de-politicize the climate change issue. If this trend towards consensus continues, we expect a gradual turn in the debate away from the validity of the science and towards a discussion of the appropriate regulatory response. Post-Sandy, the Federal Government is still unlikely to move forward with widespread climate change legislation, but we expect growing support for the Obama administration’s regulatory agenda that will impose increased costs on those industries (particularly electricity generation) that emit material amounts of carbon.

The November election may be more important for what did not happen than for what did. Under a Romney administration, we were promised a concerted effort to roll back regulations that impose additional compliance costs on older coal fired generation, the near certain approval of the Keystone XL Pipeline, and a reduction in tax incentives for renewable generation. The re-election of President Obama, and the continued Republican hold on Congress, means that the next 4 years of energy policy will look a lot like the last 4 years. New EPA regulations are likely to place further limitations on cross state air pollution from new and existing power plants, increase the cost of coal ash disposal, and require additional capital expenditures to limit particulate emissions and ground level ozone. Collectively, these regulations will accelerate the retirement of older, smaller and dirtier coal fired power plants, while at the same time the economics of new generation makes it difficult to finance new power plants to replace those that are being retired.

At the state level, ERCOT is trying to use higher price caps to incentivize new generation. Maryland and New Jersey continue to fight PJM and generation owners in their longstanding effort to mandate new generation that operates outside of the deregulated market. But so far, the market is only producing a limited number of new generation projects. In late November, the Government Accountability Office issued a report, titled “Significant Changes Are Expected in Coal-Fueled Generation, but Coal is Likely to Remain a Key Fuel Source.” This report confirmed that (i) the expansion of hydraulic fracturing and (ii) the cost of pollution controls to be mandated by new clean air regulations will cause 15-18% of the nation’s coal-fired generation to be retired by 2020. Retirement of coal plants is certain, however, the construction of new gas plants to replace this capacity is uncertain.

Hydraulic fracturing and the abundance of domestically produced natural gas continue to turn the energy industry upside down. Few things better explain the volatility and unpredictability of the energy complex better than the last 10 years in LNG. In January 2003, the dean of US energy policy experts, Daniel Yergin, wrote in Foreign Affairs magazine that the emerging overseas LNG market was “The Next Prize” (his award winning book, “The Prize” was the story of oil exploration). He urged policy makers to take the necessary steps to insure that LNG export facilities were developed around the world (and import facilities were built in the US) to ensure that “ample supplies come from many countries.” Today, one such import facility, the Cove Point import terminal in the Chesapeake Bay, has the capacity to receive 220 LNG tankers per year. So far, in all of 2012, they have received only one. Cove Point is now looking to reconfigure the import facility as an export facility so it can sell low cost shale gas to high priced overseas markets, particularly Japan where gas trades at $16 MMbtu. Cove Point is not alone, there are 15 LNG export terminal projects awaiting permits. If only half of these are built, the US could export 10bcf/day, 15% of our total 2011 consumption of natural gas. Exports of natural gas, including LNG, require prior authorization from the Federal Government and it now appears that such authorization is forthcoming. In early December, the Department of Energy announced (after an extensive study), that LNG exports are a net benefit to the economy. The LNG export trend will also put upward pressure on domestic natural gas prices.

The shift in the US market to domestic natural gas depends on the continued success of hydraulic fracturing. Perhaps the only hurdle faced by the drilling industry is opposition from environmental groups over potential ground water contamination. In fact, the EPA is expected to issue a report on water safety issues associated with fracking by the end of the year. Additional attention will be generated by Promised Land, a new film starring Matt Damon scheduled for wide release on December 28. http://www.imdb.com/title/tt2091473/. The oil and gas industry is already lining up to counter the film’s anti-fracking message. Hollywood has an uphill battle; fracking is good for the economy (driving low cost manufacturing), security (reduced dependence on foreign energy sources), and climate change. As a result of the shift from coal togas fired generation, the US is now on track to meet Kyoto climate change goals (a treaty we did not sign) as gas is 43% less carbon intensive. But as we saw with LNG, the only thing we can be sure about in the energy industry is uncertainty.

When we look at all of these trends together, increased regulation of coal plants, export of low priced domestic natural gas, increased regulation of hydraulic fracturing, and continued uncertainty in regional energy markets, we conclude it is prudent for most consumers to look for ways to hedge their exposure to rising electricity and natural gas prices. The benefits of locking in energy prices now are further enhanced by the historically low power and gas prices we are currently experiencing. As always, our approach to the energy market focuses on risk management strategies. We continue to work with our customers to design products that will protect their businesses in the event of adverse market conditions. Please let us know if your objectives or circumstances have changed such that a further review of your energy management strategy may be necessary, or if you have any specific questions about how your account is managed.