The New Jersey Board of Public Utilities (NJBPU) recently approved nearly $1.1 billion in transmission system upgrades to the state’s electricity grid. These upgrades will enable electricity generated from offshore wind assets to be connected to the power grid and are a part of the state’s plan of creating 7,500 MWs of offshore wind capacity by 2035. The project, the Larrabee Tri-Collector Solution (LTCS), is estimated to cost $504 million and was proposed by JCP&L and Mid-Atlantic Offshore Development, a joint venture of EDF Renewables North America and Shell New Energies US. The NJBPU also awarded additional onshore transmission upgrades to accommodate the additional generating capacity from LTCS and other planned offshore wind projects. These awards went to ACE, BGE, LS Power, PECO, PPL, PSE&G, and Transource at an estimated cost of $568 million. In a press release, the NJBPU stated, “These project selections will establish the first coordinated solution for offshore wind transmission in the U.S., testifying to New Jersey’s status as a national forerunner in clean energy production. This coordinated transmission solution will minimize cost and other impacts while supporting the continued expansion of offshore wind energy in the state.” New Jersey is looking to the Ocean Winds project as the first step in achieving the state’s offshore wind goals.

The Ocean Winds One project will be located approximately 15 miles off the coast of New Jersey (see Figure 1) with a generating capacity of 1,100 MWs through nearly 100 General Electric Haliade-X 12 MW turbines. These massive turbines are 850 feet tall with a blade radius of 750 feet. Ørsted and PSEG are the owners and developers of the Ocean Wind project, which will be New Jersey’s first utility-scale offshore wind farm. Project construction is scheduled to begin in early 2023, with commercial operations expected at the end of 2024. A second and adjacent project, Ocean Winds Two, is expected to add an additional 1,100 MWs of generating capacity. Construction on that project is not expected until 2028. The Oyster Creek Nuclear Station was closed in September 2018 and removed approximately 650 MW of generating capacity from the state’s grid. Ocean Wind One and Two are intended to not only replace that asset but also add an additional 1,550 MWs of carbon-free electricity capacity. Given the difference in availability of offshore wind compared to nuclear energy facilities, the additional capacity will be needed to help offset Oyster Creek production. 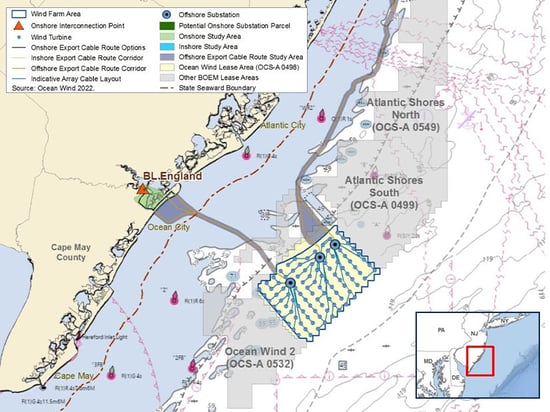 The Ocean Winds project, however, is not without controversy or opposition. Opponents of the project are seeking alternate routes for the onshore connections which are supposed to run under the streets of Ocean City, NJ. There is also significant opposition from commercial fishing groups who claim that the footprint of the wind farm and the associated electrical cables will occupy some of the region’s most fertile fishing grounds.

Many will look to the Ocean Winds project to see how a state can advance its own climate goals while also being a member of a wider Regional Transmission Organization (RTO). As discussed in a recent Quarterly Market Letter, without a clear federal energy policy or legislation, each state will need to develop its own goals and policies. However, this can be difficult since many states, where energy markets are deregulated, also belong to an RTO.

New Jersey is a part of the PJM Interconnection (PJM), which is the largest RTO in the country and comprised of all or parts of 13 states and the District of Columbia. This means that there must be some measure of cooperation between states like New Jersey, which want to move forward with a specific energy policy, and PJM, which manages the multi-state energy market and grid. Earlier this year, the Federal Energy Regulatory Commission (FERC) accepted a “State Agreement Approach” (SAA) between PJM and the NJBPU. Through the SAA, PJM initiated a competitive bid process for these recently approved transmission upgrades. Under the SAA agreement, PJM evaluated and developed recommendations on project proposals, but it was ultimately left to the NJBPU to approve and move forward with the LTCS project. New Jersey was the first PJM member state to use this SAA to advance its climate goals while also soliciting participation and input from PJM.