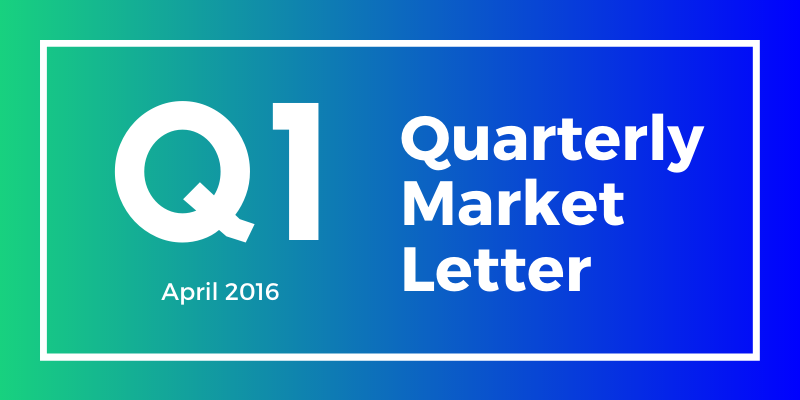 I am pleased to forward the first issue of Volume 5 of 5’s Quarterly Market Letter. The energy market remained relatively flat in Q1 and continues to trade at or near historically low levels. The chart below shows how little natural gas prices 1 have changed in the first three months of 2016. As noted below, the price of natural gas for the month of May 2016 and calendar years 2017, 2018, 2019, 2020 and 2021 were almost the same at the end of March as they were at the beginning of January. 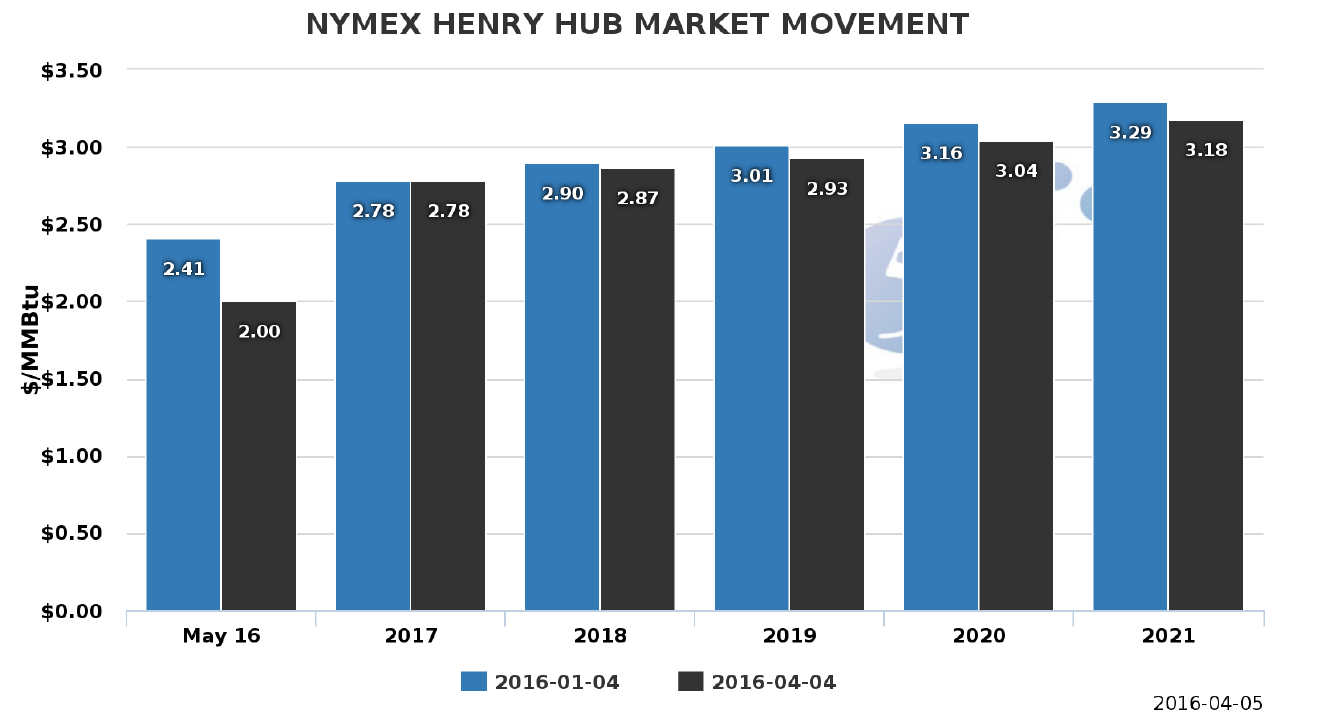 Our proprietary web based information system can now create customized charts like this one for almost any product, market and period in real-time. This data is fundamental in analyzing energy data and market conditions. Please do not hesitate to contact our Director of Technology, Matthew Shaw (matthew.shaw@energyby5.com), if you would like to learn more about the system’s capabilities.

Many critical energy matters were brought before the courts and regulators in Q1. 2 Our interest in these cases is not academic; it is driven by the significant impact such rulings can have on our clients. For example, in July 2015, a DC Circuit court 3 invalidated EPA’s 100-hour rule. This decision means that energy consumers throughout the US who were able to reduce electricity consumption by running standby generation during peak hours must halt running these generators to reduce load on May 1, 2016. Prior to the Court’s ruling, the EPA had allowed most on-site generators (even those without sophisticated emission controls) to run for up to 100 hours per year. The court’s decision was influenced by generation owners, who rightly believe that limiting the use of these generators will increase the spot price of electricity, and by environmental groups. Not only will this change reduce demand response revenue for many of our clients that used diesel engines to participate in load reduction programs, it may also increase peak summer electricity prices.

As noted in our Vol.4 Issue #3, last August and September, PJM concluded its first capacity auctions that included material changes to the capacity auction rules, called Capacity Performance. These changes are designed to avoid the generation outages experienced in the PJM market during the 2013/2014 polar vortex. As we predicted, clients with contracts in PJM – Maryland, New Jersey, Pennsylvania, DC and Illinois - are now receiving notices from suppliers of increased capacity charges that will be passed through pursuant to the “change in law” provisions in their contracts. In most cases these incremental charges are valid, however, it is important to confirm that you are being charged appropriately.

On our favorite floor (the 5th) of the Supreme Court building there is a basketball court, aptly nicknamed the “Highest Court in the Land.” Energy-related cases are so frequent at the Supreme Court that I would not be surprised if the need to understand arcane energy matters has a few law clerks spending extra time working out their frustration on the hardwood. In Q1 alone, the Court considered cases involving the EPA’s Clean Power Plan or CPP, EPA’s Mercury emissions rules or MATS, FERC’s demand response regulations, and New Jersey and Maryland state efforts to mandate new generation projects.4

These cases impact key environmental regulations as well as the fundamental structure and regulation of both wholesale and retail energy markets. The most significant rulings involve President Obama’s signature environmental legislation, the Clean Power Plan. Opponents, led by West Virginia and Peabody Energy (one of the nation’s largest coal miners), asked the Court to stay implementation of the CPP pending legal review. On February 9th, the Supreme Court, by a 5-4 vote, issued the stay the opponents were looking for. This was an unusual ruling and a very bad sign for the CPP. The Supreme Court had never before halted the implementation of a federal regulation pending legal review. And the stay reflected the Court’s conclusion that the case had a “fair prospect” of invalidating the CPP.

In a very sad and surprising turn of events, one of the 5 justices that voted against the CPP on February 9th, Justice Antonin Scalia, passed away just four days after the ruling. Justice Scalia’s untimely passing leaves the court split 4-4, with four Justices apparently in favor of the CPP and four against. Now the future of the CPP depends in part on who fills Justice Scalia’s seat on the bench.

Neither President Obama nor the 45th President will nominate a Supreme Court Justice based on his or her answers to energy-related legal questions. Yet we cannot underestimate the importance of the next election on the future of the US energy policy. While the next President may not nominate the 9th Justice, he or she will select the head of the EPA, the Secretary of Energy and the Chairman of the Federal Energy Regulatory Commission. For this reason, it makes sense to follow the candidates’ position on energy policy matters.

The democratic candidates, Secretary Clinton and Senator Sanders, are strong supporters of the Clean Power Plan. Both have environmental and energy policy statements that go beyond the goals set in the CPP. Senator Sanders also supports a ban on fracking for natural gas due to the linkage between fracking and earthquakes. At the other extreme, Senator Cruz seeks to kill the CPP, abolish the Department of Energy, and expand drilling for oil and natural gas. Governor Kasich also supports scrapping the CPP and increasing oil and gas production. Donald Trump’s website is yet to set out any energy policy positions.

Unless the new President holds an overwhelming majority in Congress, the future of key energy policies, like the CPP, will continue to be litigated in the courts.

Owners of Generation Cannot Wait for The Courts

The courts are an effective way to resolve disputes, but a poor mechanism for setting energy policy. The legal review process moves so slowly that energy market participants are forced to anticipate the success of challenged regulations long before a final ruling. This is exactly what occurred with the regulation of Mercury emissions. As noted in Vol. 4 Issue #2, in June 2015 the Supreme Court held (in a 5-4 decision) that the EPA had violated the Clean Air Act when it decided in 2012 that it was “appropriate and necessary” to regulate mercury emissions from power plants. While this rule is now being reconsidered by the EPA, this is too little too late for owners of coal plants that have already invested in remediation measures or retired plants due to the cost of meeting the new Mercury standards.

As the chart below demonstrates, owners of coal fired generation are not waiting to see if the CPP and EPA regulations like MATS are reversed. Retirement of coal fired generation continues to accelerate. To put the power plant retirements shown below in perspective, 14 gigawatts is over 30% of the peak load for all of New York State. In addition to the overhang of pending regulations, these facilities cannot compete against the combination of (i) efficient gas generation, (ii) the historically low price of natural gas, and (iii) wind and solar projects (driven by

the low cost of capital, tax incentives and decreasing production costs). For example, the cost of new generation, including current fuel prices, averages around  $75 per MWh for natural gas, $95 per MWh for coal, $73 per MWh for wind and $125 per MWh for solar.5 These economics, combined with the current low price of natural gas, mean that the use of gas fired generation is playing a larger and larger role in our generation mix. In March, the EIA announced that natural gas is expected to surpass coal as the primary source for electricity generation in 2016. The EIA does not mention MATS or the CPP as the reason for this shift. Instead they focus on

what we think is the central driver to this change, costs. EIA states that “The recent decline in generation share of coal, and the concurrent rise in share of natural gas, was mainly a market-driven response to lower natural gas prices that have made natural gas more economically attractive.” Coal faces other headwinds as well. The New York Times noted that in October 1902, when miners were on strike and coal prices were going through the roof, President Roosevelt turned to John Pierpont Morgan, then the nation’s leading banker, who quickly brokered a deal to keep the mines running. Not today. JP Morgan Chase, recently announced that “it would no longer finance new coal-fired power plants in the United States or other wealthy nations.” Oher leading US banks including Bank of America, Citigroup and Morgan Stanley have made similar moves.

The Risk of Reliance on Natural Gas

In all the enthusiasm for cleaner burning natural gas, solar and wind generation, commentators often overlook that a large portion of electricity generation still comes from coal (32%) and nuclear (19%) power plants. As we continue to build new natural gas plants and shut down old coal and nuclear plants, the electricity market is increasingly exposed to an increase in natural gas pricing. Few policy makers appear to understand that coal and nuclear power provide a valuable hedge to a market increasingly reliant on a single commodity. And there is always the risk of unforeseen developments. A recent USGS report that links hydraulic fracking to earthquakes could develop into just such an event. The map below shows 21 areas impacted by “induced earthquakes.” If those quakes start to cause damage to property or people, we could see others join Senator Sanders in seeking an immediate ban on fracking. A ban on fracking would result in an immediate and dramatic increase in the price of natural gas and electricity. 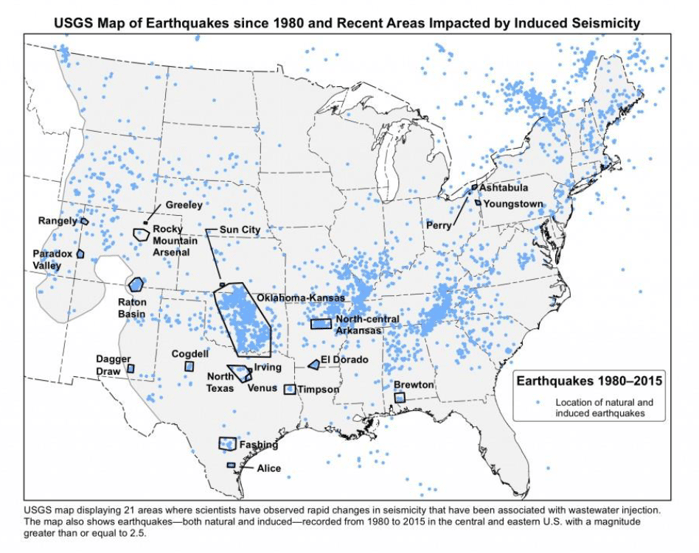 In closing, I want to send out a High-5 to our team in Texas on being named by Texas Monthly, the Texas Association of Business (TAB), Texas SHRM and Best Companies Group as the 7th best company to work for in all of Texas. We are excited by the continued growth of our business, and look forward to working with you in the United States and Mexico in 2016.

1 The price of natural gas is a good proxy for electricity prices in most markets.
2 As noted later in this letter, as a result of the political impasse in Washington, more and more often energy policy matters end up being litigated in State and Federal courts.
3 Chief Judge Merrick Garland, President Obama’s nomination to the Supreme Court, was part of the three judge panel that rendered this decision.
4 The law clerks may not be the only ones frustrated by the need to understand the workings of the energy market. In the oral argument in the MD/NJ generation case, two Justices, Justice Sotomayor and Justice Breyer, candidly admitted that they were having a very hard time understanding how the energy market functioned.
5 These numbers do not reflect the current low price of natural gas and coal, or the benefit of certain tax credits currently available to solar and wind projects. Recent reductions in renewable equipment pricing may also not be reflected.