Natural Gas basis prices for the winter of 2019/2020 have decreased by 28% since the middle of October.  Figure 1 shows how the basis price for this winter started to rally in August, reaching its peak of $2.90/MMbtu on October 16th.  Most believe that the strong rally was due to the TETCO natural gas pipeline explosion on August 1st near Danville, Kentucky.  In the wake of that accident, the amount of natural gas moving through that pipeline was reduced by 15%.   The reduction in gas volumes along this major interstate pipeline, which supplies the Northeast, had a bullish impact on basis prices for this winter, which rallied through September and early October.

This bullish trend seems to have been offset by relatively mild temperatures, large amounts of natural gas in storage and strong production.  Currently, there is over 3,700 Bcf of natural gas in storage, which is 2 Bcf more than the 5-year average and almost 500 Bcf more than what was in storage at this time last year.  Another bearish indicator is the fact that natural gas production remains strong. Last week, there was a net injection of 3 Bcf into storage, even though the beginning of November typically marks the beginning of the winter heating season as net withdrawals tend to exceed what is placed into storage.   Additionally, prompt month (December) natural gas also fell by $0.10/MMBtu for the week ending November 15th and settled at $2.688/MMbtu after reaching a high of $2.90/MMBtu earlier this month. 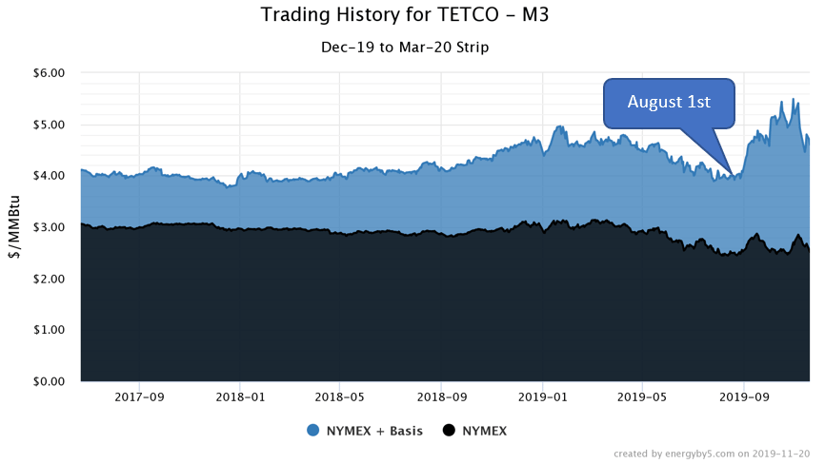 Despite the market’s initial bullish response to the gas pipeline explosion, there has been a downward correction over the last several weeks driven by both strong production numbers and the large amounts of natural gas in storage as we head into winter.