Often in commodity trading, it isn’t always the straight-forward market drivers that catch the market off guard. Rather it’s the counter-intuitive things that seem to side-swipe a market. Lately, there has been a negative correlation between the price of crude oil and the price of natural gas. This summer, a decrease in the price of crude oil has coincided with a rally in natural gas prices. This month, the inverse relationship between these two commodities will be examined in more detail.

Over the summer, prices at the West Texas Intermediate (WTI) and Brent crude oil trading hubs (the world’s two largest crude oil trading hubs) have decreased by about $40 per barrel, with WTI spot prices falling from over $120 in early June to below $80 last Friday for the November delivery month. Fifteen to twenty years ago, one would expect this to be very bearish to natural gas prices as these two commodities often traded in line with one another. Today, this is no longer the case.

A shift in where domestic natural gas is produced is the reason why these two commodities seem to move in opposite directions at the extreme ends of their price ranges. Twenty years ago, a significant amount of both crude oil and natural gas came from offshore wells in the Gulf of Mexico. Today, with the full implementation of horizontal drilling and hydraulic fracturing, onshore shale reserves have replaced the Gulf of Mexico as the largest source of the nation’s hydrocarbons.

The Permian Basin, located primarily in West Texas, is the nation’s largest oil-producing region and has turned Texas into the 3rd largest producer of oil, behind only Russia and Saudi Arabia. In 2021, these massive crude oil reserves pushed the United States into the lead as the world’s highest oil-producing nation at almost 12 million barrels per day. Significant amounts of natural gas are extracted as a byproduct of crude oil production, meaning growth rates in crude oil-producing regions like the Permian Basin also increase natural gas production rates. 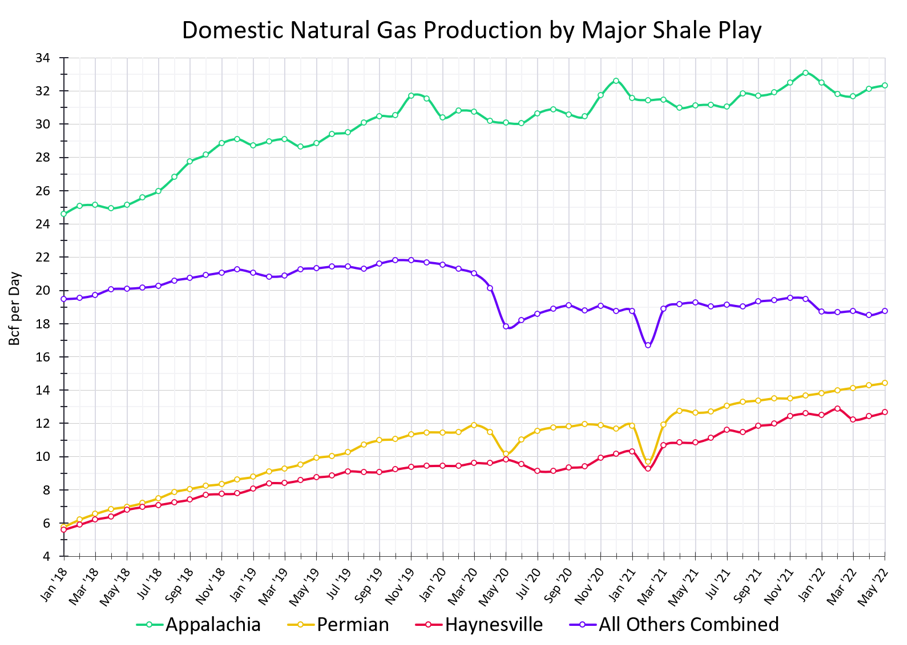 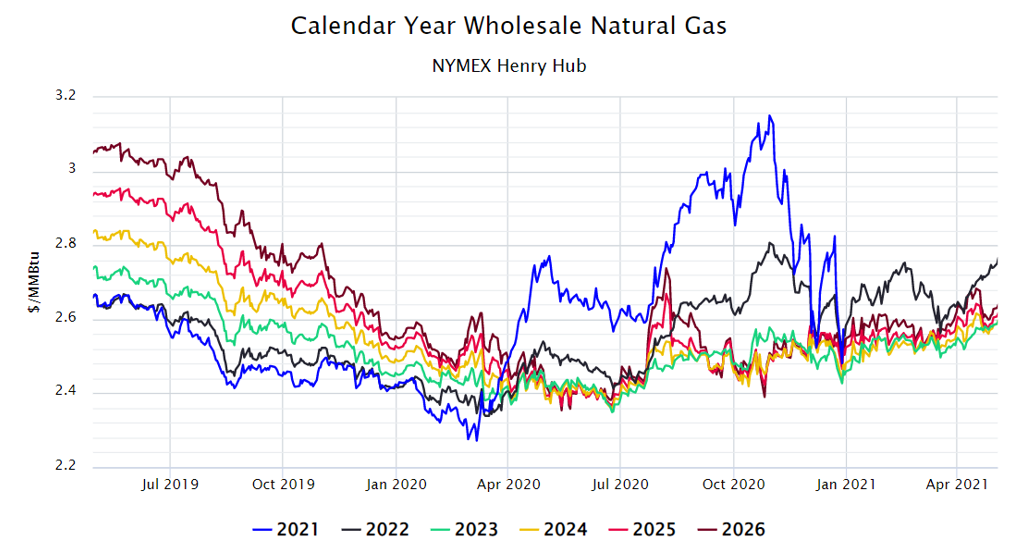 Natural gas rig counts show (see Figure 3) that only the Haynesville play in East Texas and Northern Louisiana is expanding production through capital spending on drilling activity. The nation’s largest gas producing region, in Appalachia, which includes both the Marcellus (purple line) and the Utica (orange line) shales, has actually seen a reduction in rig count over the last several months. This may seem a bit counterintuitive given what appears to be a sustained demand for natural gas both domestically and overseas. 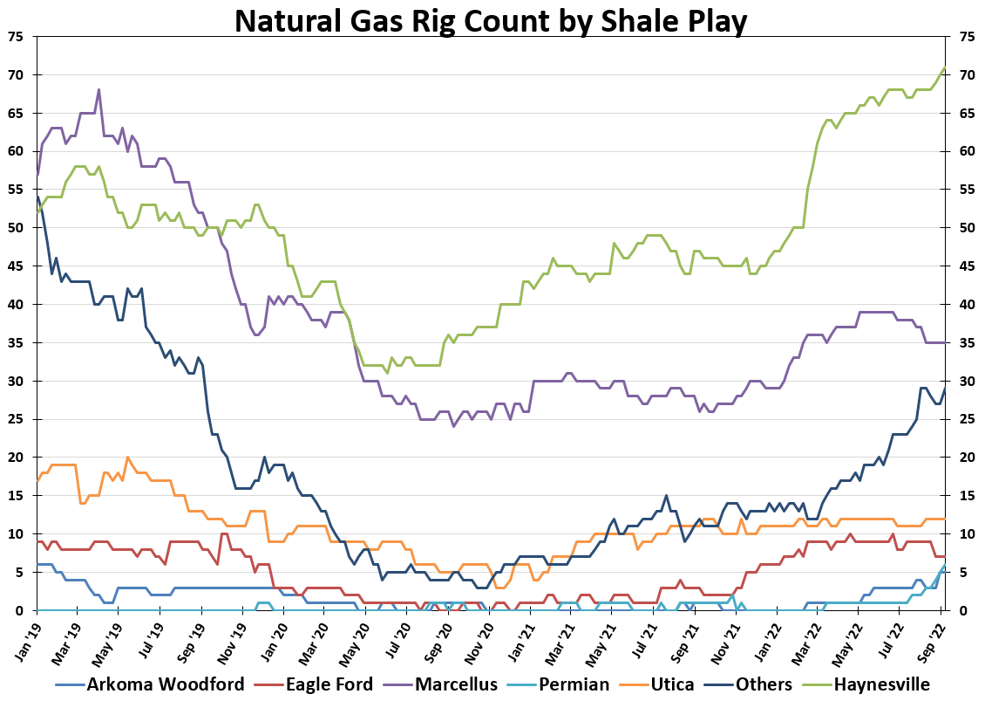 This suggests that even though spot natural gas prices over the past few months have been at their highest price points since 2008, few natural gas producers are reinvesting in the traditional plays. Rather, these producers are increasing their focus on improving their balance sheets and increasing production near the newest demand center, and it’s no accident that this is in close proximity to the majority of the LNG export terminals. One only has to “follow the money” to see that natural gas production is expanding in a way that will ramp up our export capacity of LNG instead of increasing production in the Midwest or the Northeast, where prices this winter are likely to reach record highs.

Figure 4 shows that there has been a recent decrease in natural gas prices. And while the recent sell-off across the entire forward curve might be viewed as a sign of market weakness, we would advise buyers who have not yet hedged their natural gas price exposure for the coming years to capitalize on this market movement. Figure 4 also shows that prices from 2024 through 2028 are currently trading at or below $4.75/MMBtu, which is a good price point to consider making additional purchases in those years. 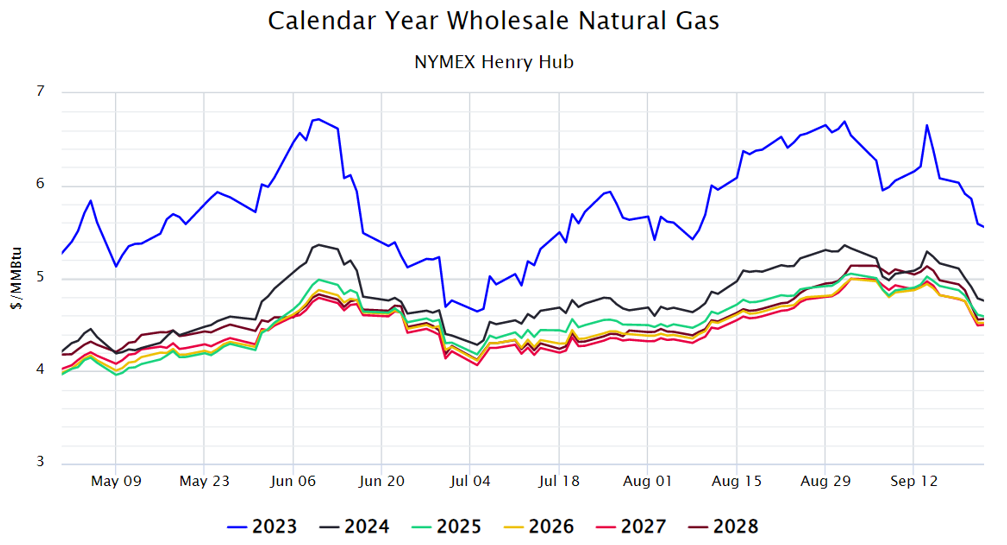