Upstate is Down and Downstate is Up

Anyone from New York knows that New York is really made up of two states: upstate and downstate.  Some will even put a finer point on this and claim that New York City is distinct from downstate and the same can be said of New York’s electricity markets.  Today, there are two factors that have a significant impact on the price of electricity throughout New York.  One of those factors is tied to regulatory developments in Albany and the other is connected to the way capacity has been trading across the state.

Figure 1 shows the trading history for electricity in calendar years 2020 to 2025 in New York City.  The sharp increase in power prices across the state in May 2018 coincided with the release of its carbon pricing proposal.  Electricity futures in New York City immediately rose by approximately 35%.  Similar cost increases were observed in other regions of New York State because of the large number of fossil fueled power plants in the state.  Since May, wholesale electricity prices have fallen almost as quickly as they rose after the carbon pricing proposal was first announced.  Over the last 3 months, wholesale prices have remained flat with average wholesale prices of approximately $40/MWh.   This same trend is applicable for upstate New York too.  In the Rochester area, wholesale prices started to fall last spring and are now averaging between $23 and $27/MWh across calendar years 2020 to 2025. 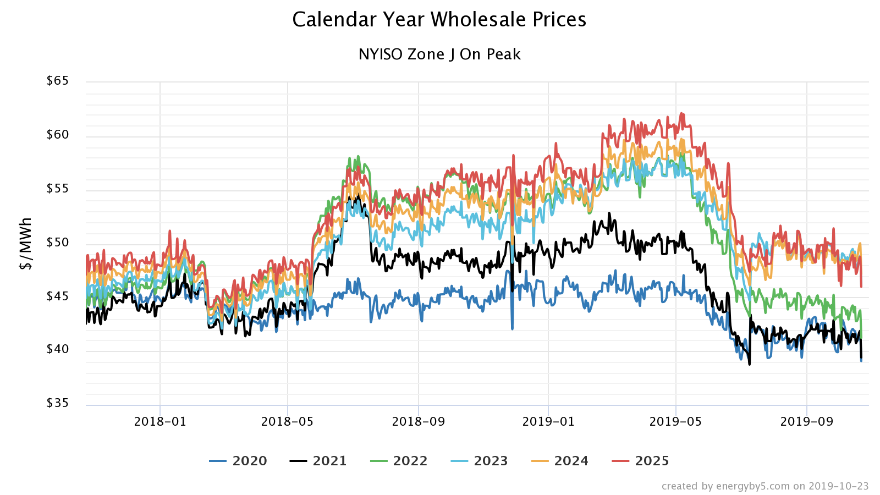 Unfortunately, falling wholesale prices have not necessarily translated into lower retail electricity prices – especially in New York City.  One reason for this is a rally in the downstate capacity markets.

Figure 2 shows how capacity prices upstate (orange line) compared with capacity prices in New York City (blue line).  This clearly shows that for the last five years, capacity prices have fallen throughout the state.  However, this summer’s capacity auction prices cleared at their highest level in New York City in four years, and this winter’s prices are also slightly higher than last winter’s auction results.  Today in New York City, capacity is approximately 45% of a retail electricity price.   There are other non-energy cost components that have also contributed to higher retail costs in addition to capacity. These components include Zero Emissions Credits (ZECs), Offshore Renewable Energy Credits (ORECs) and Renewable Portfolio Standards (RPS).  Collectively, these three components can account for an additional 0.5¢/kWh. 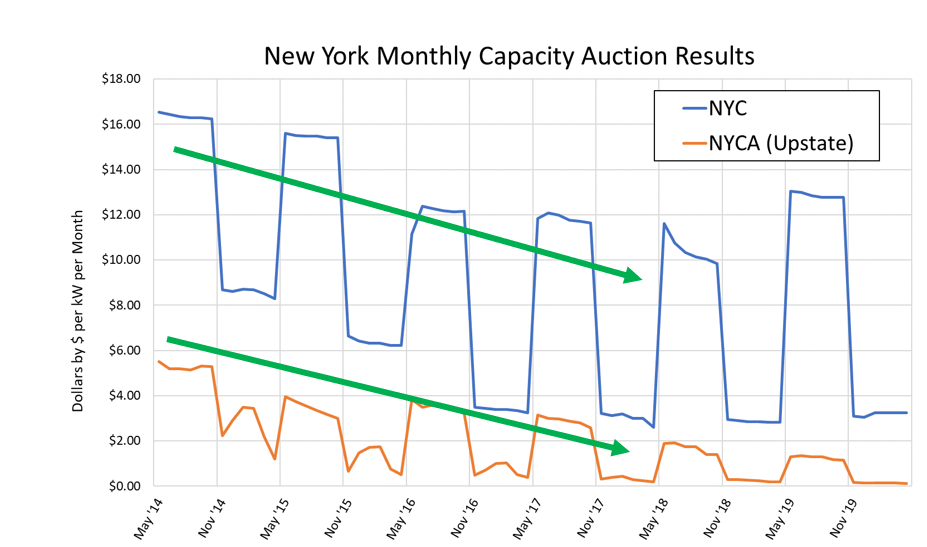