What is Driving the Increased Load in Texas?

This summer, it is clear how much the state of Texas has grown over the last few years. When Texas first deregulated its power grid about 20 years ago, the population of Texas was around 20 million. By 2010, it had grown to just over 25 million, and by 2020 it was just over 29 million. Texas is actually expected to hit 30 million this year, a growth of about 50% in 20 years. With this kind of population growth, it is no wonder that the total load on the ERCOT grid this summer is setting all-time records, it is just the frequency and magnitude of those records being broken that caught many of us by surprise.

In June, ERCOT broke the previous all-time peak demand record, 74,897 MW set back in August of 2019, a total of nine times, with the highest being 76,681 MW on June 23. In July, it looks like that old record will likely be broken around 21 times, with the peak day being July 20 at 79,953 MW, with even the average daily peak exceeding the previous record.

The combination of seemingly relentless heat and rapid population and economic growth has put increased demands on the ERCOT power grid, with only minimal growth in natural gas-powered electricity generation. For instance, during the summer of 2011, the closest proxy year to 2022 and one of the hottest on record since 1980, the peak demand was 68,294 MW. Since 2011, ERCOT has added about 5,400 MW of highly efficient natural gas-fired generation and retired about 5,600 MW of coal-fired plants.

The state has also added a large amount of wind and solar generation capacity. In 2011, total wind and solar capacity was about 9,600 MW of wind and 15 MW of solar. This summer, total wind capacity is above 35,000 MW, and solar is above 10,500 MW. This massive growth in renewable generation has helped Texas lead the way for the energy transition away from fossil fuels, but it also makes the state very vulnerable to electricity scarcity during times of high demand and low wind speeds. Unfortunately, this exact circumstance has manifested itself a few times this summer. 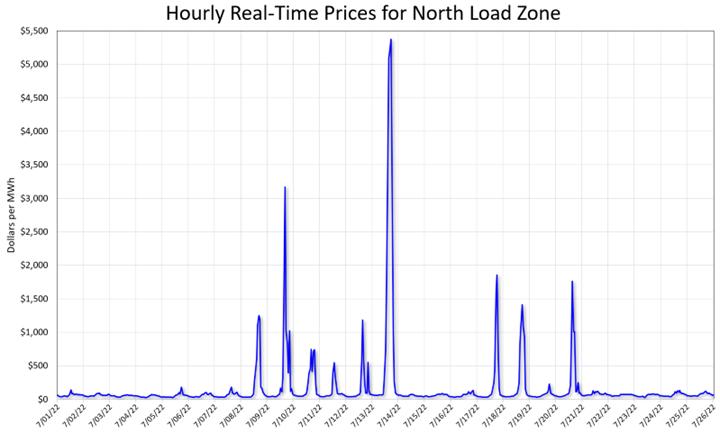 Sunday, July 17 is a good example day to analyze. On that day, peak load was around the median for the month (half of the days were higher, half lower) but wind output from 2:00 PM to 6:00 PM averaged around 5,680 MW, about 16% of total capacity, but right in line with ERCOT’s “low wind scenario” for a summer day. This typical mid-day drop in wind output is very common for West Texas wind generation and shows why there is a natural synergy between wind and solar generation in Texas. Southward-facing solar arrays, from noon until around 3:00 PM, are typically at their peak output, which coincides with the times when statewide wind output is typically its lowest.

The good news is that the problem appears to be attempting to fix itself, just as the deregulated, free-market design was intended. With mid-day hourly prices becoming so volatile, and over-night hourly prices when wind output is typically at its highest relatively low, new applications for wind generation assets have decreased while solar and battery installations are filling the interconnection queue at ERCOT. Figure 2 shows the cumulative impact of currently installed solar assets, plus those in the interconnection queue with anticipated start dates by the end of next year. 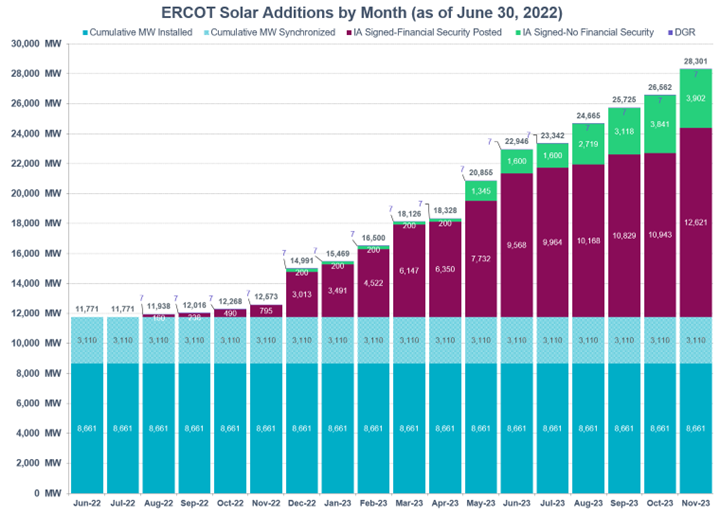 The following disclaimer is needed when viewing this data - not all projects in the queue, even those with financial security posted, will be completed on time or possibly at all. The market is seeing a potential flood of solar continuing to be built in Texas, dramatically altering the economic supply curve during the summer afternoon hours when we have seen higher probabilities of scarcity pricing.

This is not new or news to the market. Forward wholesale power prices reflect this anticipated increase in solar generation (and battery storage) assets, which is one of the main reasons the forward prices for future summers are discounted to this year’s prices (Figure 3). That might not help us for the balance of this summer, which is why the month of August is trading near $275 per MWh, but August of 2023 is trading at a more respectable $125 per MWh, and August 2024 is below $100 per MWh, with the July’s beyond 2023 all below $75. 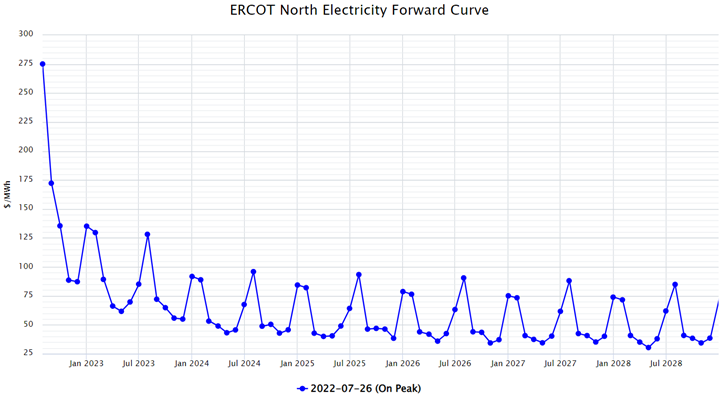