Late last month, ERCOT released their preliminary Seasonal Assessment of Resource Adequacy (SARA) report. This is the seasonal report that identifies the output from all current, new, and planned generating resources and compares that amount to the forecasted peak load. Reserve margin is the difference between the forecasted peak load and the total amount of generation available to meet that demand. Recently, the reserve margin has climbed from a low of 8.6% in 2019 up to 12.6% in 2020.

The SARA report for this summer forecasts a peak load of 77,144 MW, which would be a new all-time record for ERCOT if the forecast comes true. This is an increase of about 2,250 MW, or 3% compared to last summer’s peak of 74,376 MW and 2019’s peak of 74,897 MW. For scale, this 3% increase is equal to roughly half the state’s entire nuclear generation fleet. The good news is that ERCOT expects a reserve margin of 15.5% to meet the growth in summertime demand. This suggests that the state of Texas is not only growing (even during this pandemic) but that after years of concerns about declining reserve margins, new generating capacity is finally growing at a pace that is faster than the increase in demand.

Last year’s final report for the summer of 2020 had the bottom-line capacity number (the one used for the reserve margin calculation) at 82,199 MW. This summer’s expectation is 86,908 MW, an increase of over 4,700 MW. This healthy reserve margin is comforting for this summer, but the dynamics become more interesting when examining longer-term projections for resource adequacy, which include a significant amount of new generating capacity from renewable assets, such as wind and solar. The amount of new solar generating capacity that is expected to be available through April 2022 is shown in Figure 1.

ERCOT expects that the state’s peak electricity demand will grow at a reasonable rate, between 1% and 2% each year. But the real question is whether all of the new forecasted renewable generation will become operational. Next summer’s capacity is expected to climb as high as 97,645 MW (up from 86,908 this summer) and in 2023, that capacity figure grows to 99,249 MW. And while wind and natural gas make up about 1,400 MW of this increase, the majority is scheduled to come from planned solar developments.

The solar projects most likely to be built are those that have posted financial security with signed Interconnection Agreements (maroon bars in Figure 1). This amounts to over 7,000 MW of new solar generating capacity in ERCOT over the next year. Even if 50% of these projects do not materialize or are delayed – that’s a lot of new generation. 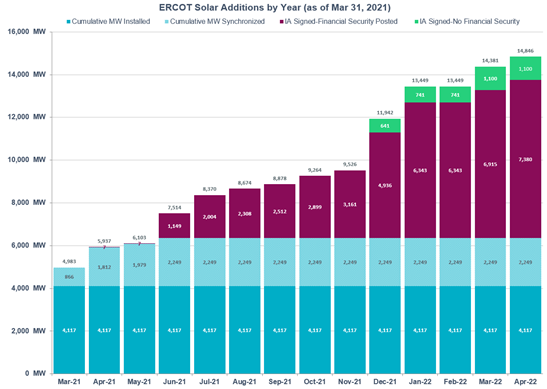 From a price risk management perspective, it’s important to ask “what happens if only some or none of these solar projects are built?” Forward electricity markets already account for most of this new solar generation and excess generation in its futures prices. We know this because the forward market for on-peak summer prices is backwardated, meaning that prices get less expensive with each subsequent summer. Since the market knows that demand will increase, it must also expect that the growth rate of future generating capacity will outpace demand. Electricity futures would be elevated if this expectation were not present in the market. If the market already anticipates this new generation, what happens if it doesn’t materialize?

Winter Storm Uri sent shockwaves through the ERCOT power market, with reverberations that extended beyond the Red and Sabine Rivers. Multiple developers of renewable generation assets were hurt financially due to underperformance during the storm. This, along with factors such as added costs for winterization and the potential for additional ancillary service costs, could increase the strain on solar project developers. And while these increased costs are the burden of the developer, ultimately it is the electricity buyer who pays the price, either through increased offered prices for wholesale electricity to cover the developer's increased costs or through higher market prices due to a reduction in supply from canceled generation projects.

While it is much easier to buy into a falling market, we’ve seen too many clients wait too long in a rallying market, run out of time, and get forced into buying a commodity at a price that is much higher than they were expecting. Our advice is to consult with your energy advisor who can help examine the market, determine your risk, and make prudent risk management decisions based on your open positions, especially now while SARA thinks there is enough generation to cover the state’s electricity needs.