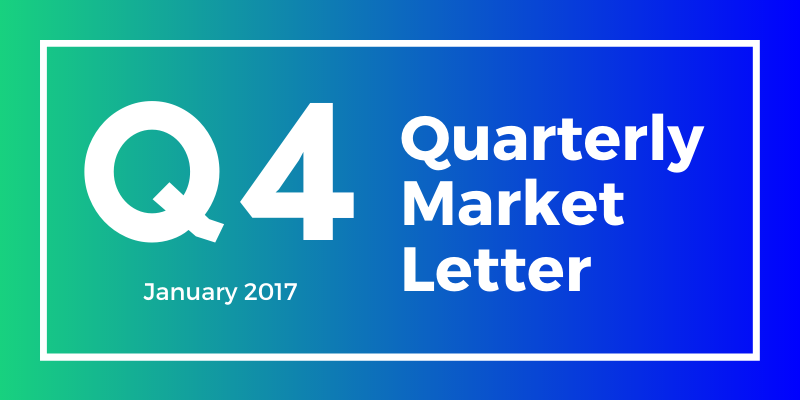 On behalf of the team at 5, I am pleased to forward our market letter for the last quarter of 2016. The most important policy development in Q4 was the election of Donald Trump as the 45th President of the United States. Mr. Trump was elected on a platform that promised energy independence, increased drilling of oil and natural gas, and an end to the war on coal. While other events might be overshadowed by the election, a review of recent energy developments question the impact of the Federal Government on the energy market. In fact, state policy and changes in energy technology may have a greater impact on the energy market than who holds control of the executive office. A few recent market developments are summarized below.

While the speed and scope of these changes continues to surprise us, the importance of State actions and technology may overshadow changes implemented by the Trump Administration. On the other hand, the Federal Government’s approach to environmental regulation will change significantly.

During his campaign, Mr. Trump advocated an “America First Energy Plan.” The new President may not need to take any action to meet this goal. On January 5th, the US Energy Information Administration issued their annual outlook. EIA projects that even without a change in current energy policy, in almost all scenarios, the US becomes a net exporter of energy by 2020. This shift is driven by continued declines in oil imports and rising exports of natural gas. Clearly, policies that accelerate drilling of oil and natural gas should shift the graph below to the left, but the move to energy independence is a function of more efficient energy production and lower usage, trends we expect to continue regardless of the Federal Government’s actions. 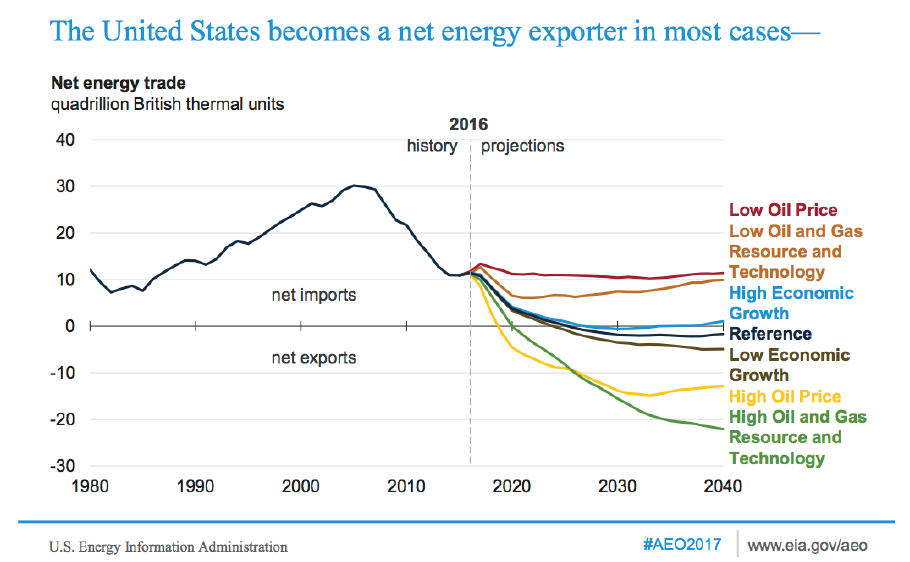 The Trump campaign strongly opposed the Obama administration’s climate change agenda and we expect the administration to reduce the Federal Government’s role in promoting clean energy. It is less clear how much the new administration’s policies will impact renewable generation development in the short run. The recent growth of renewable energy is a function of three factors: (i) a significant reduction in the cost to generate, (ii) state policies that support renewables, and (iii) federal tax incentives. Wind and solar are large international businesses and we expect continued progress to reduce the cost of generating electricity from these resources.

We see little change among those states (for example, MA, NY, CA) that are aggressively supporting renewables. The most likely risk is to the federal tax incentives. However, even with a Republican Congress, we see no significant change in short term tax policy. The key federal tax subsidies for wind and solar generation were renewed in December 2015 and are scheduled to expire over the next few years. Most commentators do not see these tax subsidies coming under attack from the new administration.

The Clean Power Plan: Regulations at Risk. The Clean Power Plan is a broad effort to regulate greenhouse gas emissions from existing power plants. The plan was sponsored by the EPA and strongly supported by President Obama’s administration. Implementation of the plan has been held up by the Supreme Court pending review of a lawsuit challenging the legislation. If the DC Circuit court affirms the legality of the CPP, the decision will be appealed to the Supreme Court. If the Supreme Court does not yet have a 9th justice, a likely 4-4 vote would leave the lower court’s ruling in place. Regardless, it is still up to the EPA to administer the plan. Trump’s nominee to head the EPA is Scott Pruitt, the current Attorney General of Oklahoma. Mr. Pruitt is one of the state attorney generals who is part of the suit opposing implementation of the CPP. He also joined lawsuits against the EPAs regulation of methane from the oil and gas sector. With an EPA led by Mr. Pruitt, it is likely that the CPP is dead. What is less clear is whether the defeat of CPP will reverse the planned retirement of coal plants in various regions of the US.

The Continued Evolution of the Utility Space

The energy market remains in a state of significant change. A recent report issued by MIT focuses on the transition now taking place throughout the industry. MIT’s report argues that this transformation is driven by the growth of distributed energy technologies. The report argues that “distributed technologies – including flexible demand, distributed generation, energy storage, and advanced power electronics and control devices – is creating new options for the provision and consumption of electricity services.” We agree with MIT’s observation.

The Decentralization of Power Generation: As defined by MIT, distributed generation includes energy resources that are located within the utility distribution system. This definition picks up on-site generation (conventional and renewable), energy storage, and demand response. The growth of distributed resources is driven by reductions in the cost of on-site generation and storage, as well as the increasing willingness (and ability) of customers to pro-actively generate power or reduce consumption in response to market signals. The regional market that best reflects this trend is PJM (which covers all or parts of 13 states and DC). As we have noted before, a significant portion of PJM’s capacity comes from demand side resources (approx.
11,000 GWs in 2019 and 2020). Distributed resources also provide a growing portion of regulation reserves in PJM, these are resources that can respond to certain changes in the power grid. This trend is not limited to PJM. Distributed resources are now expanding in all markets, both regulated and deregulated. MIT’s conclusion is supported by our own experience. We are spending more and more time working with clients to maximize the value of these distributed resources.

The Growing Importance of Intermittent Resources: Commentators tend to focus on the carbon characteristics of solar and wind generation. While it is true that these renewable energy sources do not generate CO2, they are also intermittent. It sounds obvious but solar generation needs the sun to shine, and wind power needs the wind to blow. Texas is a perfect example. The chart below shows the variability of wind output in Texas over a single week in 2015.

Distributed Resources Challenge the Utility Model: Energy markets in the US also struggle to manage the impact of distributed resources on the viability of base load generators, particularly nuclear and coal plants. In a recent report, analysts from the consulting firm ICF stated: “Pressures to integrate DERs [Distributed Energy Resources] onto the grid are growing, given declining costs, heightened customer adoption, and supporting federal and state policies. Integrating a growing array of DERs onto the distribution grid presents a complex set of challenges, which is compounded by policies that require utilities to develop a market for products and services at the distribution system level.”1 As noted earlier, some generator owners are seeking special revenue streams for base load generation. Others, including Edison International (parent of utility Southern California Edison), are altering their business models. Edison’s CEO noted that “it would be foolish to dismiss the potential for major changes in the utility business model.” Interestingly, Edison has been aggressively expanding into the advisory and renewable space acquiring Altenex (a renewable power advisory company), Delta energy (an energy broker), SoCore (a solar developer) and Eneractive Solutions (an energy efficiency company).

In our Q3 letter we noted that our technical charts suggested that the bearish market in natural gas may be coming to an end. We continue to believe that this may be the case. Over the past quarter, we have seen a significant rally in 2017 natural gas prices and a modest rally in 2018 prices. Further out on the curve, 2019, 2020 and 2021 remain relatively flat. This continues to present an opportunity for clients with exposure in years 2019 and beyond.

Recent market price drivers centered around changes in weather and the weather forecasts. Towards the end of December, prices rallied to a two-year high, driven by the fear of a particularly cold January. Those forecasts were recently reversed and warm weather is now predicted. As a result, the price of natural gas has dropped considerably. Changes in storage reflect this trend. The last week of December saw one of the largest withdrawals we have ever seen in December, while the first week of January was one of the smallest. These large changes (200 Bcf per week in difference) can have a dramatic change in the total amount of natural gas traders believe we will have in storage at winter’s end.

On the supply side of the equation, production continues to slow down. From the high set in the summer of 2015 of about 74.5 Bcf per day to the recent trend closer to 71.5 Bcf per day the decrease in production is equal to about 1,100 Bcf per year. That much of a change in production is larger than the difference in demand between a very cold winter like '13-'14 and a very mild winter like '14-'15 (a difference in about 850 Bcf of less demand in the mild winter). While we don’t believe production will return to levels at the beginning of this chart, we do believe that even a mild reduction in production like we’ve seen over the past year might be enough to cause a rally in the one to two year price of natural gas. 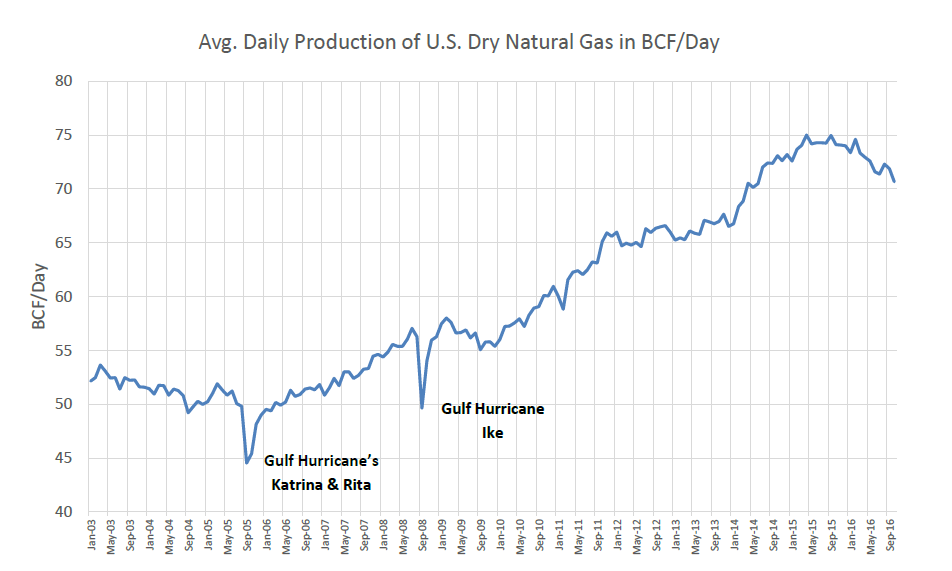 2017 is setting up to be another interesting year in energy policy. We look forward to following the policy changes implemented by the new administration and the impact that such changes have on energy markets. During this period of uncertainty, we continue to advise our clients to take a conservative approach to managing energy price risk. While we do not know how or when the new administration will act on energy matters, we are confident that as the markets adjust to the new team in Washington, we will see periods of heightened volatility. Please do not hesitate to contact us if you would like to discuss ways to mitigate your exposure to future market movements.