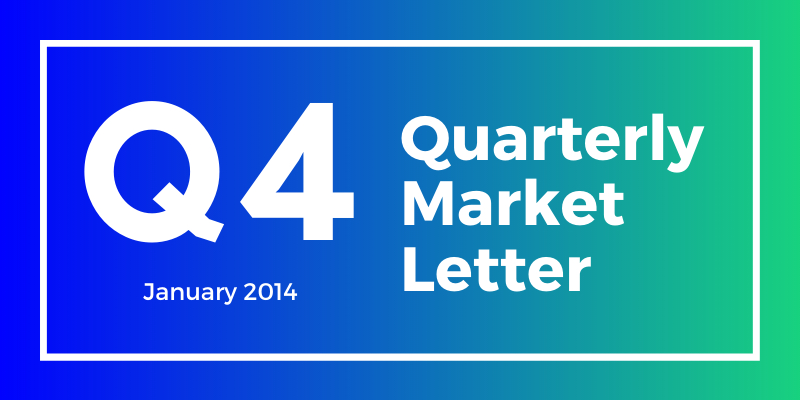 I am pleased to forward 5’s 2013 fourth quarter overview of the energy market.

Before discussing the energy market, I would like to take a moment to thank our many clients and partners for their support over the past 24 months.We formed 5 in December 2011 and began working with clients in early 2012. Since that time, we have advised over 800 commercial and industrial clients, and we now assist our clients in managing almost 2 billion kWh of electricity and an increasing amount of natural gas as well. We could not have achieved this success without a long list of friends and supporters. Thank you. In 2014, we look forward to helping clients manage an increasingly wide variety of issues in a changing energy market.

This quarter’s letter is divided into two sections. The first looks at broad developments in the energy market. The second focuses on several regulatory developments on the Federal and State level.

Past letters commented on the shift in the United States from coal to natural gas as the primary fuel for power generation. In this letter, we turn our focus to how this changing supply picture may be impacting the volatility around electricity prices. 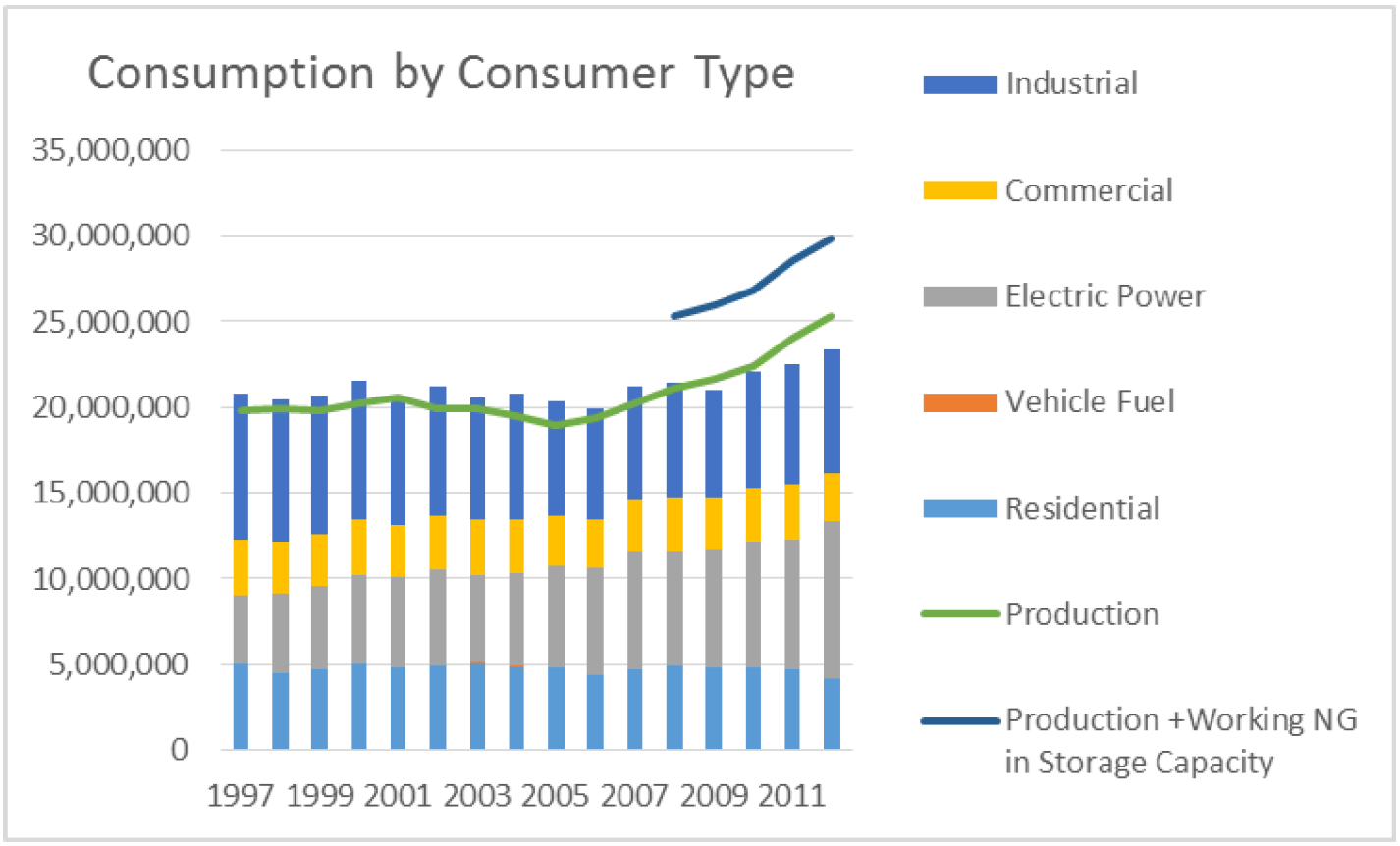 The increased level of production and available storage clearly impacts the price of natural gas; it may also change the way natural gas has historically reacted to extreme events. This winter we have seen record cold and record withdrawals of natural gas. These withdrawals are reflected in the chart below. 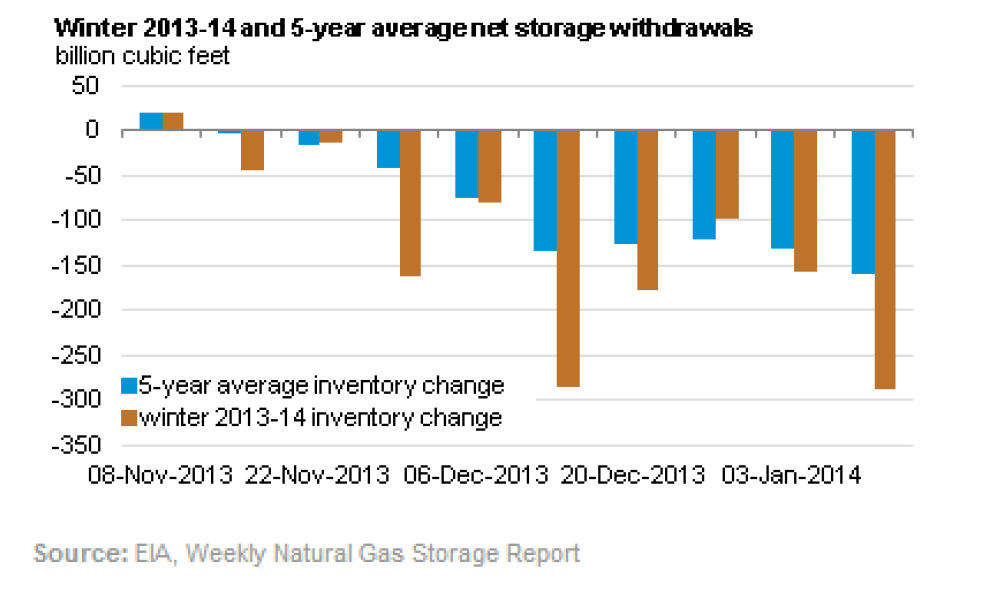 If we had seen withdrawals at these levels before 2005, it is likely that the market may have tested highs for electricity and natural gas. Instead of seeing significant and long term reactions to weather events, however, we see a market that still responds to weather and storage withdrawals, but the responses are short lived. Today, the market will move up with an event but once the immediate weather event has passed, prices moderate. Our head of supply, Eric Plateis, believes that this may reflect a paradigm shift, with the price of natural gas (and related electricity prices) no longer moving on fears of scarcity as production and storage are sufficient to respond to increased demand. The current cold snap is now testing the natural gas supply and distribution infrastructure and will also shed more light on the extent to which scarcity pricing is a less important factor in setting longer term natural gas and electricity prices.

There is a second paradigm shift worth mentioning as well. This is the increasing amount of capital that gets deployed into any specific commodity when investment funds believe there is an opportunity for a return. As many of these funds look at the same indicators to determine where to place their bets, a lot of money moves in or out of commodities at the same time. In many cases, the quantity of money being speculated is greater than the breadth of the market itself. This may cause exaggerated moves in both directions. It is difficult to get good data on flows of capital into commodity speculation, particularly natural gas and oil; however, we are confident that higher levels of speculative investment are having an impact on the market not seen in earlier periods.

While we think the chances for a broad market rally are limited by the new levels of production, it is very hard to predict how the market will respond. January’s dramatic rise in the near term price of natural gas is just one example. For this reason, we continue to urge clients to exercise caution. Over the last 24 months we have consistently told clients that the risk reward balance favors a conservative approach to managing energy price risk. There remains more room for the market to rally than to fall. For this reason, we have advised clients interested in price stability to lock in at current price levels for as long a term as possible. Many of our clients listened to this advice and entered into long term contracts, in many cases going out until 2020. The map below provides some near term validation to our recommendation, showing the extent to which spot retail prices have rallied in 2013.

There are many important energy policy issues working their way through FERC, State electricity regulators, independent system operators (e.g. PJM/ERCOT) and both Federal and State courts. In this quarter’s letter we outline some of the more important issues to our clients, these include; (i) the debate around introducing a capacity market in ERCOT, (ii) potential changes to the demand response rules in PJM, (iii) the broader implications of court challenges to state mandated generation projects in Maryland and New Jersey, (iv) the status of EPAs pending regulation of existing power plants, and (v) recent developments in the litigation of EPAs cross-state air pollution rule (CASPR).

A significant issue facing ERCOT is the new push for a capacity market. ERCOT is an energy only market. Generators are paid only for the energy they produce; they do not receive a capacity payment simply for being available to generate. By contrast, PJM, NYISO and ISO New England markets include various forms of capacity payments. Owners of generation see capacity as a new and important source of predictable revenue, however, the most common argument they make to regulators is that a capacity market is needed to insure sufficient supply of generation. Retailers and consumers see capacity as an incremental cost that must be borne by consumers.

In October, at a Texas PUC open meeting, two of the three commissioners voted in favor of a mandatory reserve margin. A mandatory reserve margin is the first step towards a capacity market. The market responded quickly to the news. Calpine traded up 7.3% the next day, NRG, gained 6.6%. The Commissioners’ vote was the first act in what is sure to be a multi-act play. On November 29th the PUC announced that they would be holding a two day workshop to discuss this issue on January 29-30, 2014. They also requested comments by December 16th and reply comments by December 23rd. Since that date, they have received some 70 filings on the case. More recently, the Commissioners announced that the date for the workshop has been postponed until March 20th or later. One reason for the delay was the delay in the delivery of two key reports from ERCOT and The Brattle Group. These reports will address the resource adequacy issue. We will continue to monitor developments in this case. In the near term, the potential for a capacity market will place pressure on prices in ERCOT.

As noted in our last quarterly letter, in September and October, courts in Maryland and New Jersey ruled that state mandated power contracts were unconstitutional. These decisions create significant roadblocks for several projects that, if built, will materially increase the quantity of new generation in these states. These rulings were both appealed. One interesting issue raised by various commentators is whether the logic behind the holdings in these cases could be used to challenge other state mandated contracts, including contracts for renewable procurement. Twenty nine states and the District of Columbia have adopted Renewable Portfolio Standards that require regulated utilities to sign long term contracts for forward purchases of renewables. It is not easy to predict how the two appellate courts will rule and the possible spillover to renewable contracts, but the broad scope of the two state rulings creates uncertainly in PJM and other markets in which state mandated contracts are used to incentivize new generation.

There is no shortage of federal issues impacting electricity markets as well. The EPA will be the focus of many of these ongoing debates. In September, the EPA issued new standards to regulate carbon from new power plants. President Obama directed the EPA to issue rules on emissions from existing sources, including power plants, by June 2014, and to finalize the new standards by June 2015. There continues to be a wide range of speculation on what approach EPA will take with respect to existing sources. We will just have to wait and see what actions are taken by the EPA.

Another issue that received considerable coverage in the fourth quarter was the cross-state air pollution rule, commonly referred to as the Transport Rule. This rule addresses certain upwind states whose emissions impact downwind states air quality standards. In August 2012, a DC Circuit Court struck down the Transport Rule on various grounds. The legal issues are complex and the DC Circuit Court’s ruling was appealed to the United States Supreme Court. On December 10th , the Supreme Court heard oral arguments in the case. Most commentators felt that the oral argument went very well for the EPA. Only eight justices heard the case (Justice Alito recused himself) and the EPA will need 5 votes to overturn the District Court’s ruling. A decision from the court is expected in June. Texas is one of the upwind states challenging the EPA rules. A favorable ruling from the Supreme Court will put additional pressure on existing coal fired generators in Texas and other upwind states.

As you can see, there is much to watch in 2014. We will do our best to keep you informed of continued changes and developments as the deregulated energy market continues to evolve.