Is Texas Two-Stepping Past Extreme Cold?

A Review of the Texas Energy Grid Performance Throughout This Winter

As February approaches, the Texas winter has included an abnormally warm December, followed by two major cold fronts throughout January. With roughly three weeks to go to the 1-year anniversary of Winter Storm Uri (the notorious Arctic blast that pushed the state’s electric grid, and the various systems that rely on it, to the brink of total collapse), it is still too early to announce the official end of winter. Texas may very well get another few shots of frigid air before the bluebonnets crop up. Still, with a very faint light at the end of the tunnel (aided by a warmer-than-average forecast for the region in February), it is a good time to review the performance of the state’s energy systems after the recent cold fronts that passed through.

December 2021 was the second warmest nationally on record. As we see in Figure 1 below, Texas was warmer than average by double-digits throughout most of the state. This pattern of warmth extended to almost the entire country east of the Rocky Mountains. 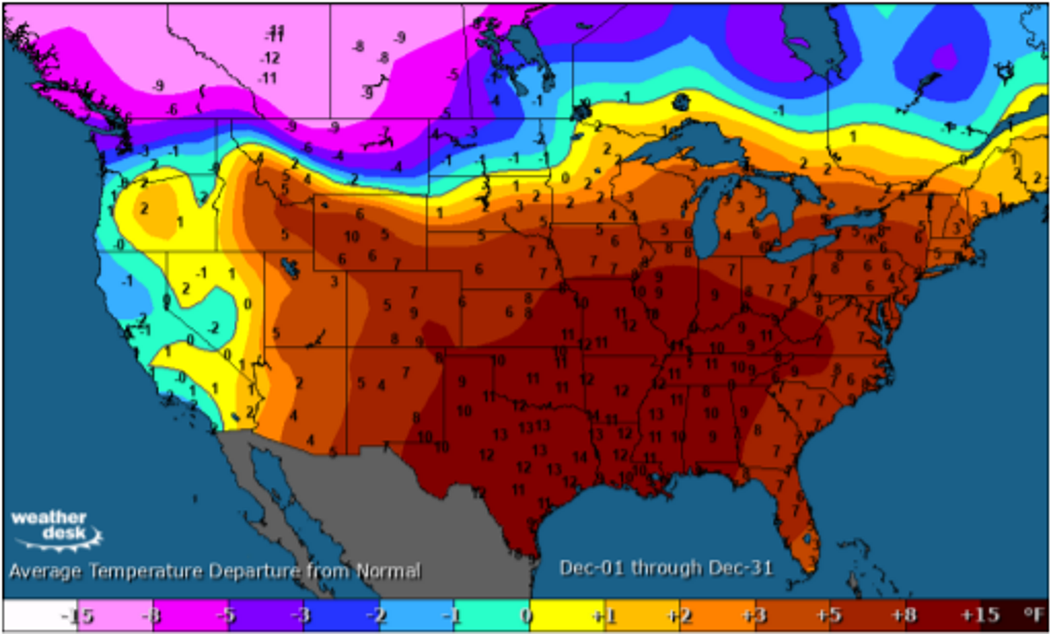 Figure 1: Above Average Warm Weather in December 2021 from Constellation

Make no mistake though, the cold did break through. January was a completely different story. In fact, January 2022 is likely to finish colder than both the 10- and 30-year averages nationally. Figure 2 shows how this cold reached Texas, with temperatures across the state a few degrees below normal on average over the course of January. 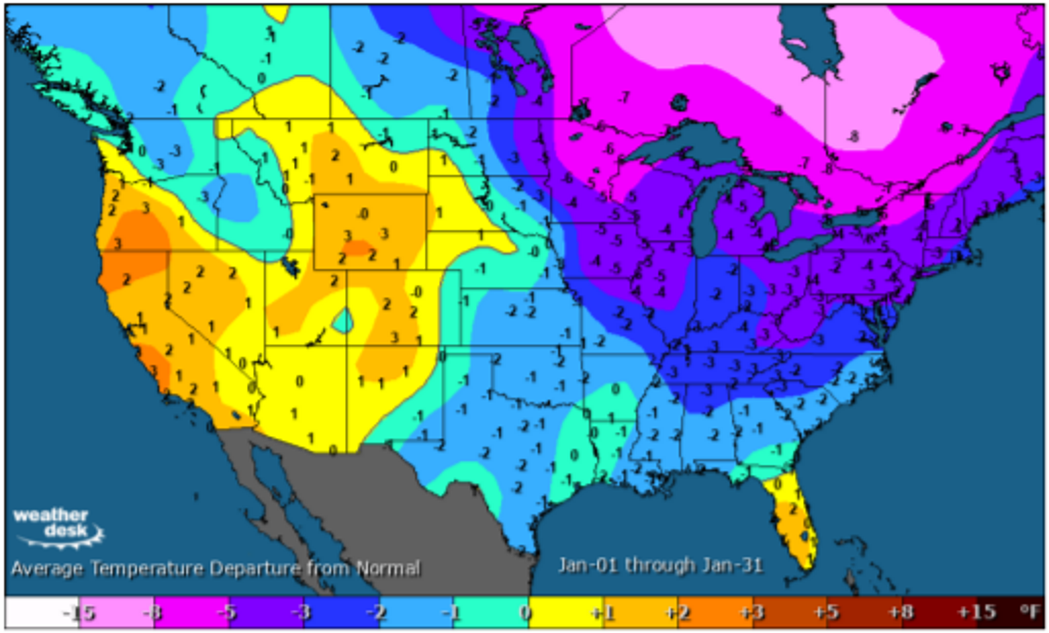 Figure 2: Below Average Cold Weather in January 2022 from Constellation

January brought two major cold fronts to Texas. The first of these fronts impacted the state starting on New Year’s Day 2022. During this front, West Texas dipped down to 20 degrees for 12 hours. West Texas is an important region for the state as most of the state’s natural gas is produced in the Permian Basin region. It has been estimated that ~25% of Texas’ natural gas production “froze off” – meaning the gas could not be delivered to market due to cold weather. This is a more common occurrence in production regions like the Permian because of the amount of water that comes out of the ground alongside the hydrocarbons that the wells are delivering. When temperatures drop below freezing, the water also freezes and the natural gas is not able to flow out of the wells and into pipelines like it normally would.

Figure 3 below compares this drop in natural gas production on New Year’s Day this year to the drop on Valentine’s Day last year, which was about the time that Winter Storm Uri began. The New Year’s “freeze-off” event was minor compared to Winter Storm Uri and most of the impacted gas production facilities were able to resume operations the next day. We still do not know the exact correlation between gas freeze-offs and forced outages at power plants, but Bloomberg noted that 1.5% of the state’s generating capacity was off-line during this most recent event. This highlights how much work remains to be done to “winterize”, or harden, gas production facilities in Texas. If the gas system (which is outside the purview of ERCOT) cannot operate at full capacity during cold snaps, then there will be power reliability issues again in the future. 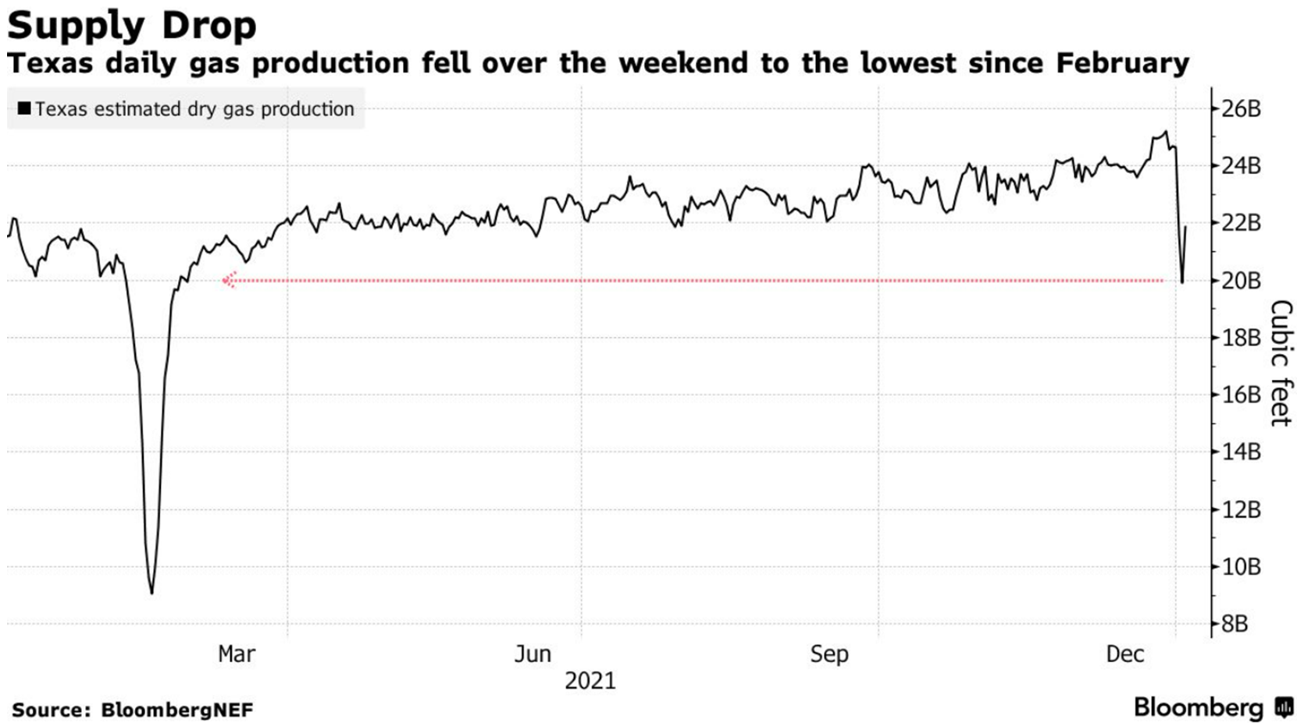 The second major cold front of the month happened on the 20th and 21st of January. According to preliminary BloombergNEF data, based on pipeline flows, in-state natural gas production dropped 6.2%. Data from analytics firm RBN Energy showed a 4.4% drop in production from the Permian Basin alone. The Texas Railroad Commission, which regulates the oil and gas industry, does not track gas production in real-time and does not require producers to report outages, leaving analysts to comb through unofficial data from third parties. During this second freeze-off event, market participants noted an increase in withdrawals from gas storage facilities on the Gulf Coast, offsetting the declines in production. As such, spot gas and power prices were not affected.

On the bright side, ERCOT has been busy inspecting power generation facilities this winter, and reported on Tuesday, January 18, 2022, that most of the power plants in the state's fleet (321 out of 324 facilities) have successfully “winterized” in accordance with the new regulations that were put in place post-Uri.

All Texans (especially those that lived through Winter Storm Uri) are cautiously awaiting for spring to arrive and the conditions that allow our power grid to thrive, namely: mild temperatures, steady natural gas production, and strong output from wind and solar resources. While the state is almost in the clear for the winter of 2022, be mindful that much work remains to be done to upgrade and maintain the world-leading, independent, yet interconnected nexus of energy systems in Texas. ERCOT can inspect all the power plants that it wants. However, if those plants do not have access to the fuel that they need to operate, then it is all for naught.

Batteries for Battery Park and Beyond