On July 11, New York celebrated the commissioning of the Empire State Transmission line. The 20-mile line connects the Dysinger switchyard in Royalton to the East Stolle switchyard in Elma, creating a new transmission hub in Western New York (see Figure 1). The $180 million power transmission line upgrade enables an additional 3,700 MWs of renewable energy to be transmitted throughout the state.

An analysis conducted by the New York Independent System Operator (NYISO) estimated the project will reduce carbon emissions by approximately 7.4 million tons. New York currently has a goal to be 70% powered by renewable resources by 2030 and have a net zero emission grid by 2040. The Empire State Transmission Line brings the state one step closer to achieving that goal. 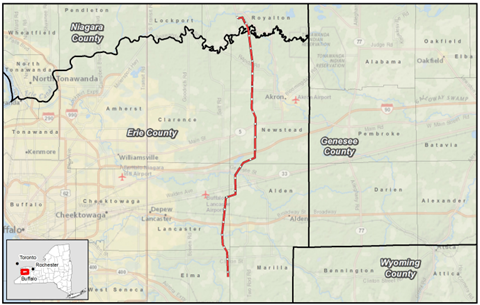 NextEra Energy Transmission New York (NEETNY) developed and is now operating this 345-kV transmission line. NYISO selected the project from a competitive solicitation process and NEETNY worked closely with NYISO and the New York State Public Service Commission to coordinate the project's completion. Construction began in March 2021 and was completed this past June. The Empire State Transmission Line marks the first competitively bid transmission project awarded and built in the state of New York.

NEETNY’s main objective was to increase capacity and integrate more renewable energy into the state’s electric grid to support the state’s sustainability goals. NEETNY developed a solution called a phase angle regulator (PAR) to manage power flow and allow grid operators the flexibility to move renewable energy around New York. The Dysinger Switchyard features the PAR and serves as a connection to seven 345kV lines that will help enable the flow of renewable energy.

In addition to providing greater access to renewable energy, the Empire State Transmission Line improves grid congestion and reliability. The project increases power flow and will stabilize pricing, creating an estimated $950 million in customer savings over its lifetime. With an emphasis on reliability, Richard Dewey, president, and CEO of NYISO said "the power grid that we have in place today is not going to be adequate to serve the needs of New Yorkers into the future. We're really going through a radical transition where not only the supply is being replaced by clean energy solutions, but also the infrastructure that needs to be in place needs to be upgraded both from a technology and a capacity standpoint."

With the push toward electrification, more projects like this will be needed to keep up with growing electricity and renewable energy demand. "In essence, the Empire State Line is unlocking a significant amount of renewables already in operation, that can now flow freely to support the citizens of New York and its businesses," said Rebecca Kujawa, president, and CEO of NextEra Energy Resources. "We believe that we're going to need more transmission, not only in New York, but across the country."

Get to Know Karen Sweeney