Crude Oil and Natural Gas Prices Move in Step With One Another?

Like a lot of myths or half-truths, the belief that natural gas and crude prices are positively correlated (move in the same direction up or down at similar times) was at one time very true, but as technology and trends changed over time, so did this correlation. Recently, even energy traders held onto the belief that natural gas and crude oil would always trade within ratios of approximately 10:1 to 12:1. This means that if crude oil were trading at $24 per barrel, then natural gas would trade at approximately $2 per MMBtu, or in similar ratios of $36 to $3 and $48 to $4.

This assumption was built upon both a fundamental and technical trading foundation. Before horizontal drilling and hydraulic fracturing became common, natural gas was predominantly extracted as a by-product of crude oil. The amount of natural gas that was extracted was in direct proportion to the amount of crude oil from a given well.

The advent of horizontal drilling and hydraulic fracturing in the late 2000s meant that natural gas could be withdrawn through means and in locations independent from crude oil. Many energy experts refer to this as the “shale revolution.” The chart below shows that from the late 1990s to the late 2000s, there was a moderate correlation between natural gas spot prices and crude oil prices, with the only major differences being driven by the cold winters in 2001 and 2003 and the impact of Hurricanes Katrina and Rita in 2005. 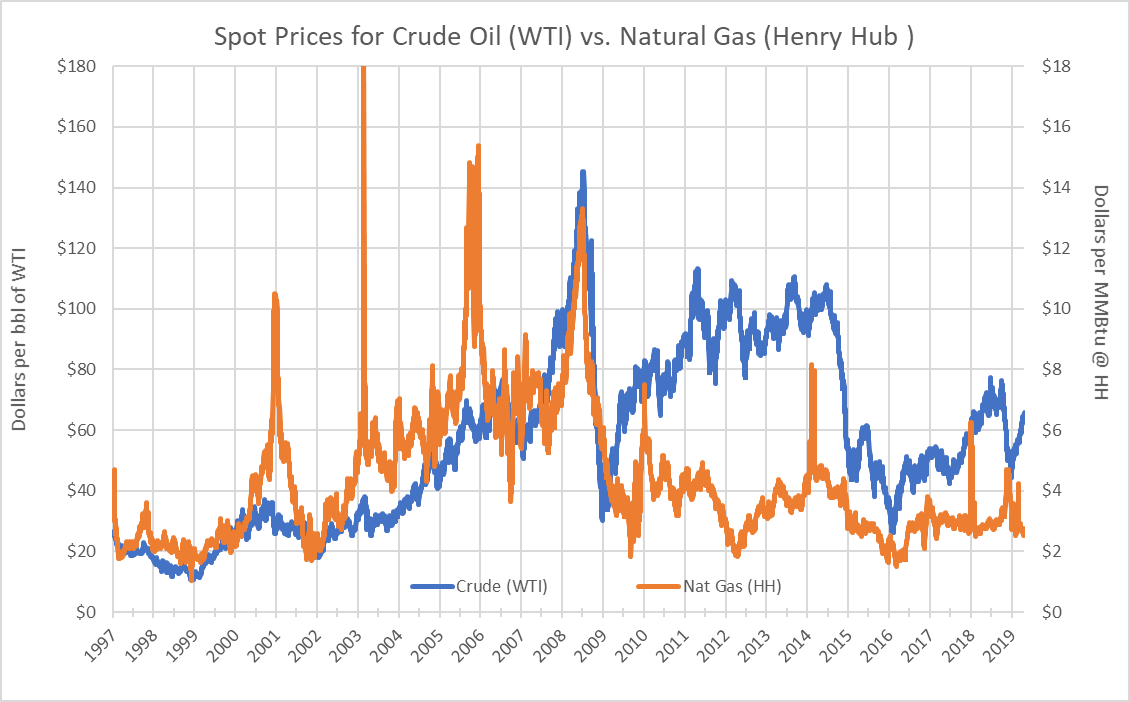 After 2010, the market started to view these two commodities independently. Crude oil was still very much a global commodity that was heavily influenced by factors such as the value of the U.S. Dollar, the global economy and tensions in the Middle East. Meanwhile, natural gas prices in the U.S. were more affected by domestic supply and demand.

In examining the last few years, a different pattern begins to emerge. While there was a moderate correlation between crude oil and natural gas in the late 1990s and early 2000s, the early 2010s saw large fluctuations in natural gas tied to weather patterns while crude oil was more heavily influenced by global patterns of supply and demand. By 2017, the majority of the new natural gas production was coming from four locations: the Marcellus and Utica Shale formations in Eastern Ohio and Western Pennsylvania, the Haynesville Shale in Northwest Louisiana, and increasingly the Permian Basin in West Texas.