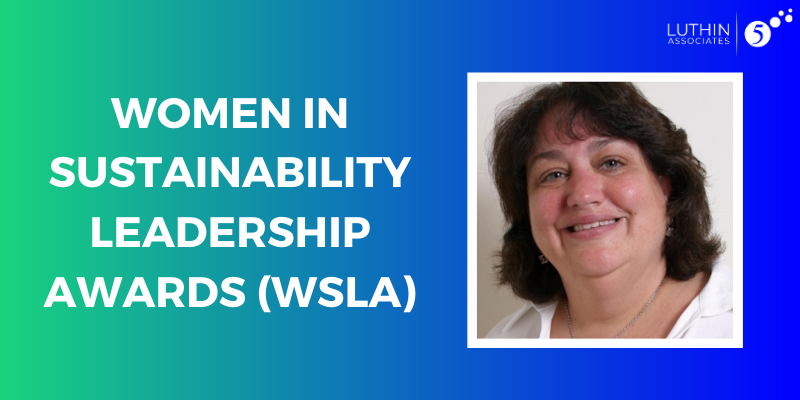 Catherine Luthin, President of Luthin Associates, an energy management consulting firm founded in 1994, is among 10 winners of gb&d’s fourth annual 2017 Women in Sustainability Leadership Awards (WSLA). All award recipients were recognized as being influential women at the forefront of sustainability. Catherine Luthin considers herself fortunate of the opportunity to be honored alongside such inspiring women who continue to break ground within the industry. Catherine's position as a female entrepreneur has taught her the importance of sharing her knowledge with others.

Catherine has continuously been committed to the improvement of energy efficiency during her 30-plus years’ experience in the energy management industry. She held a position on Mayor Bloomberg’s Energy Policy Task Force, where she focused on long-term planning and energy sustainability for New York City. Currently, she is an active participant on Mayor de Blasio’s 80 by 50 Task Force in an effort to reduce greenhouse gas emissions by at least 80% by 2050. To advocate for the MWBE community, in 2010 she became Chair of the Energy Policy Committee of the Council for Women in Energy and Environmental Leadership (CWEEL). Organized in 2006, CWEEL (a subsidiary of the professional Association of Energy Engineers) supports vocational development by mentoring aspiring women to pursue education and careers in the energy and environmental fields. Catherine also chairs and manages Consumer Power Advocates (CPA), an association of large, non-profit institutions whose primary goal is to decrease the cost of energy by focusing on regulatory decisions and programs that impact energy consumers in New York State. Through CPA, she has been actively involved in regulatory proceedings at the Federal Regulatory Commission (FERC), New York Independent System Operator (NYISO), and the New York Public Service Commission (PSC).

For more information, please read the current issue of gb&d magazine which features an article about the winners of the fourth annual Women in Sustainability Leadership Awards: https://gbdmagazine.com/2017/the-2017-women-in-sustainability-leadership-awards/