New York, like many states across the country, has a standard by which certain qualifying renewable generation assets are awarded one Renewable Energy Certificate (REC) for each MWh of electricity delivered to the grid. RECs provide two main functions to the market:

This market solution for RECs New York is a common practice; however, the different types of RECs, referred to as “Tiers”, are unique to New York. In this market, there are three tiers of RECs: Tier 1, Tier 2 (Maintenance Resources and Competitive Program), and Tier 4. These tiers of RECs should not be confused with Zero Emission Credits (ZECs), which are similar in name and structure but are distinct as they are only applicable to nuclear generation facilities.

Given the complexity of the different RECs in the New York market, it is important to define what makes each tier unique and their current or estimated future value.

Tier 1, as its name suggests, is the top-shelf REC currently available in New York. To be eligible for Tier 1 status, the renewable generation must have the following attributes:

The main purpose of Tier 1 RECs in New York is to meet the Renewable Portfolio Standards (RPS) obligations of Load Serving Entities (LSE) in New York. Therefore the vast majority, if not all, Tier 1 RECs are offered first to LSEs to fulfill these obligations. NYSERDA annually adjusts both the price and quantity of Tier 1 RECs that LSEs must purchase to help balance supply and demand. If there is an insufficient quantity of RECs to meet Tier 1 REC demands, NYSERDA has established an Alternative Compliance Payment, typically a slight premium to the Tier 1 price set by NYSERDA.

Here are the most recent four years of Tier 1 REC prices: 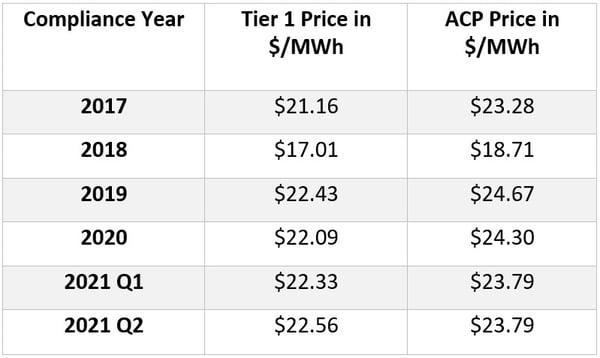 Table 1: Most Recent Four Years of Tier 1 REC Prices from 5

Tier 2 is currently broken out into two different programs: the Maintenance Resources and the Competitive Program. Maintenance Resources are Tier 2 eligible resources that must also demonstrate the financial risk of suspension of service while the new Competitive Program is more of a brokered solicitation by NYSERDA to connect owners of older renewable generation to buyers looking to support these types of assets.

The Tier 2 Competitive Program is still in the development phase. On the other hand, the Maintenance Resources program option is currently available but only for LSEs to meet their RPS obligations and they are priced at $0.02 per MWh.

In October 2020, the New York State Public Service Commission created the Tier 4 REC. The fuel and technology type requirements are similar to Tier 1 RECs. While Tier 1 RECs have no geographic limitations (except being generated in New York State), Tier 4 resources must be either located in New York City or delivered to the city over a new transmission interconnection. Offshore wind RECs are not currently considered Tier 4 resources and will be procured separately by NYSERDA. Similarly, behind-the-meter resources are also not eligible for Tier 4 status.

While prices for Tier 4 RECs have not been established they are specifically mentioned in Local Law 97 (LL97) as a means to reduce an entity’s carbon limits. By using the current electricity coefficient listed in LL97 and the dollars per ton of CO2e, we can derive a theoretical ceiling on the price of a Tier 4 REC of approximately $77.44 per MWh. Anything higher than that and the LL97 non-compliance payment is cheaper than the REC. The ultimate value of a Tier 4 REC that is procured and offered by NYSERDA is likely to be between the value of Tier 1 RECs ($23/MWh) and the theoretical ceiling of $77/MWh.

Keeping up with the ongoing developments in the New York REC market is not an easy task. Please contact us or connect with your 5 Energy Advisor to learn more.